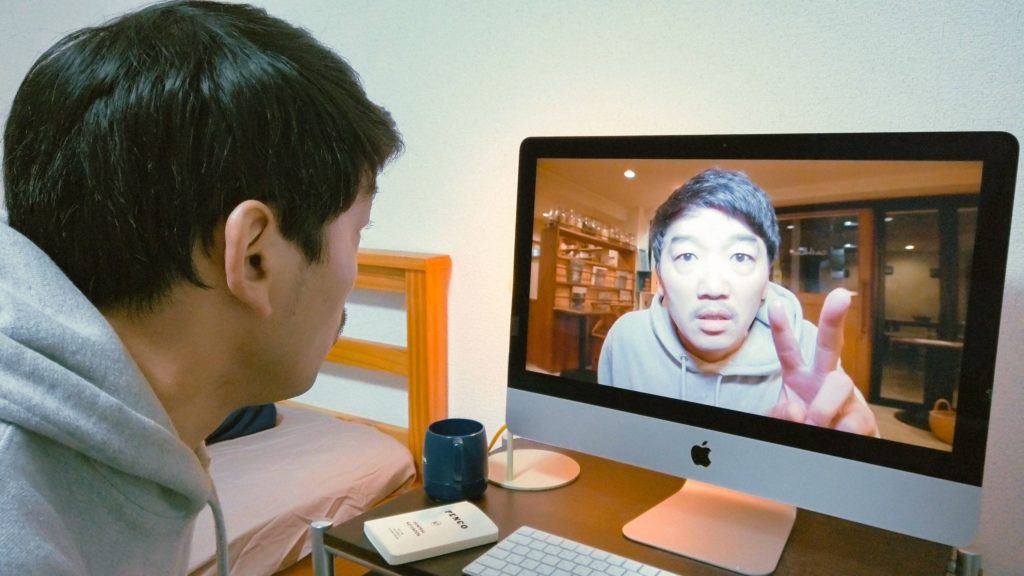 There are two things which just about every person on earth has done extensively over the past eighteen months, regardless of location or circumstances. The first, of course, is communicating online. With physical proximity rendered an impossibility, Zoom hangouts became essential lifelines, the chance to connect with friends and family in a manner (slightly) more personal than email or group chats. These interactions felt so much like the real thing, in fact, that it became jarring when something would happen to break the illusion; just as anyone who tried to facilitate a group singalong of “Happy Birthday,” only to be met with a cacophony even more off-kilter than usual. As seamless as a virtual conversation can be, the time delay can make you suddenly wonder if it isn’t a subtle version of time travel.

This brings us to the second universal COVID pastime, which is of course to suddenly start dwelling on an insane thought and carrying it to its logical (or illogical) conclusion. It’s clear that both of these activities fed into the making of Beyond the Infinite Two Minutes, a delightful new Japanese sci-fi comedy shot during lockdown in 2020. It’s a lightweight, deeply silly little film, but its mindbending plot mechanics are guaranteed to make your head spin.

Kato is a mild-mannered cafe owner who receives a curious video call… from himself. Calling from the cafe to his upstairs apartment, Future Kato breathlessly explains that he’s speaking from exactly two minutes from the future– then tells his past self that he needs to run down to the cafe, so that he can explain this to his own past self. Kato runs down the stairs to the cafe, only to see himself arrive in his apartment on the video screen. Before he can fully wrap his head around the situation, his friends get wind of it, and gleefully begin exploring the possibilities of this so-called “Time TV,” from romantic prospects to lottery tickets (one of them breathlessly speculates that they can see if a nuclear war is coming, before realizing that probably won’t happen in the next two minutes). Needless to say, tampering with the flow of time has consequences, and it isn’t long before the friends find themselves reckoning with paradoxes, ruthless gangsters, and a couple of strange men who may or may not belong to a cult.

It’s always a pleasure to watch a film as giddily, breathlessly in love with its own possibilities as Two Minutes. Save for a brief, mostly wordless prologue in which Kato ambles up from his cafe to his tiny apartment (giving the audience a crucial sense of spatial relations), the film simply does not stop moving, its characters constantly running from one location to the other, screaming out their latest ideas to play with the space-time continuum. These are lovable doofuses who use this newfound technology to play parlor tricks on themselves, or to know which toy they’ll get from the vending machine at the train station, or to just see what happens when they point the two screens at each other to create a Droste effect. A more pedantic viewer than myself might question the exact ins and outs of the timeline (it is, for lack of a better word, wibbly-wobbly), but if you’re looking for plotholes, you’re missing the point. 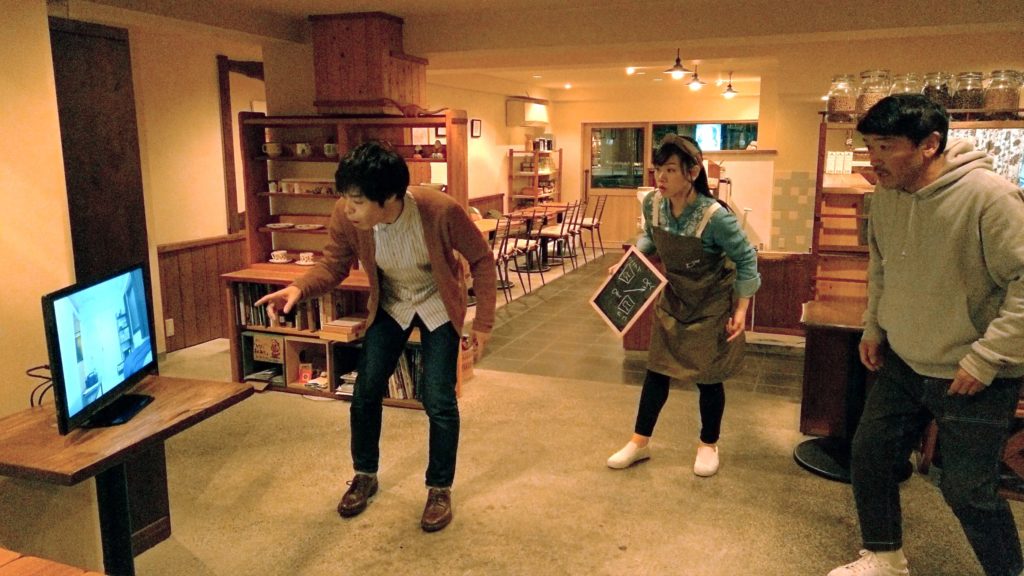 As if its narrative acrobatics weren’t enough, Two Minutes is presented as a single, continuous take: we follow its characters as they run back and forth between the cafe and Kato’s apartment, diving in front of the screen just in time to catch their past or future selves. The one-take conceit has become something of a go-to gimmick in recent years (particularly in the wake of the Oscar-winning 1917), but here it feels fresh and genuine, as if the cast and crew are just too excited to yell cut. As in most similar films, I suspect there are cuts strategically hidden within pans and blackouts (given the characters’ conversations with themselves, I imagine there would have to be), but it’s a credit to the film that this possibility didn’t occur to me until after the credits rolled. The entire thing feels at times like an experimental play, so it did not surprise me to learn that the actors and filmmakers are all members of a popular Japanese theatrical troupe called Europe Kikaku. You certainly get the sense that these are actors who are accustomed to playing off each other; even taking into account extensive rehearsal, it’s hard to imagine this kind of split-second precision between strangers.

To be sure, this is a piffle of a film, far more interested in the comic possibilities of the Time TV than in hard science fiction. Viewers of a less forgiving nature may find their patience tried by the film’s manic energy and constant streaming (to say nothing of the fact that every conversation is repeated, by necessity, at least twice). But films with this level of invention and exuberance are rare, and watching it is nothing short of a joy. The most obvious comparison would be Shinichirou Ueda’s beloved single-take comedy One Cut of the Dead, but the similarities go beyond the central conceit. Like One Cut, Two Minutes is lovably broad and infectiously silly, and it will win you over even as steam pours out of your ears trying to wrap your head around the concept. Does its view of time paradoxes run especially deep? Not really, but it kept a smile plastered across my face the whole time, which is ultimately more important.

Part of our ongoing coverage of the 2021 Fantasia Festival – watch this space for more!