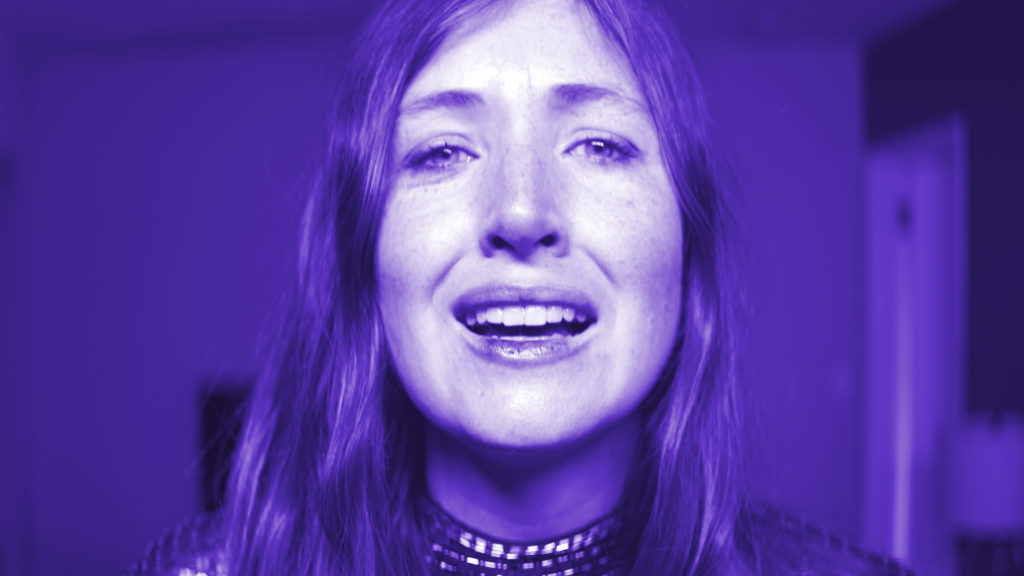 In 1967, Arthur Lee was convinced he was going to die within the year. He wasn’t sick, mind you, apart from a handful of emotional issues exacerbated by sudden fame and reportedly round-the-clock doses of LSD; the Love frontman was simply stricken with the unshakable conviction that he was set to die at age 27 (oddly, this was before the mythology of the “27 Club” had taken root in the popular consciousness; in 1967, Lee’s contemporaries Janis Joplin, Jimi Hendrix, and Jim Morrison all still walked the earth). Determined to make the most of his remaining days, Lee set to work writing and recording Forever Changes, the album he intended as his last will and testament. Lee didn’t die, of course– he would stick around another 40 years, finally passing away in 2006– but Forever Changes would remain his masterpiece, and nothing he recorded in the ensuing years would ever approach its artistry or acclaim.

Of course, most of us are not tortured musical geniuses, nor do we have the resources available to record a haunting landmark of psychedelic baroque-pop. Still, the thought has likely crossed most of our minds more than once: what would we do if we knew our deaths were imminent?

The obvious answer, as explored in Amy Seimetz’s offbeat indie-horror fantasia She Dies Tomorrow, is “utterly freak the fuck out.” The “she” of the title– or at least, the first she– is Amy (Kate Lyn Sheil). On the surface, Amy seems to be doing okay– young, pretty, moving into a brand new house– but she’s clearly having a rough time of it: as the day drifts into night, she downs bottle after bottle of wine, plays the same lugubrious choral record over and over, and scrolls through page after page of cremation urns as if she were fantasy-shopping for shoes. When her friend Jane (the always welcome Jane Adams) comes to check in on her, Amy calmly explains to her that she’s going to die tomorrow, and do you think it would be possible to have her made into a leather jacket? Jane chalks it up to the alcohol (“Did you relapse again?” she tellingly asks), and heads home once she’s confident that her friend will be alright. No sooner has she gotten home, however, than Jane becomes overwhelmed by the belief that she’s going to die tomorrow as well. Distraught, Jane shows up late to her sister-in-law’s birthday party… where she meets a whole new host of people to whom she can spread her peculiar affliction. 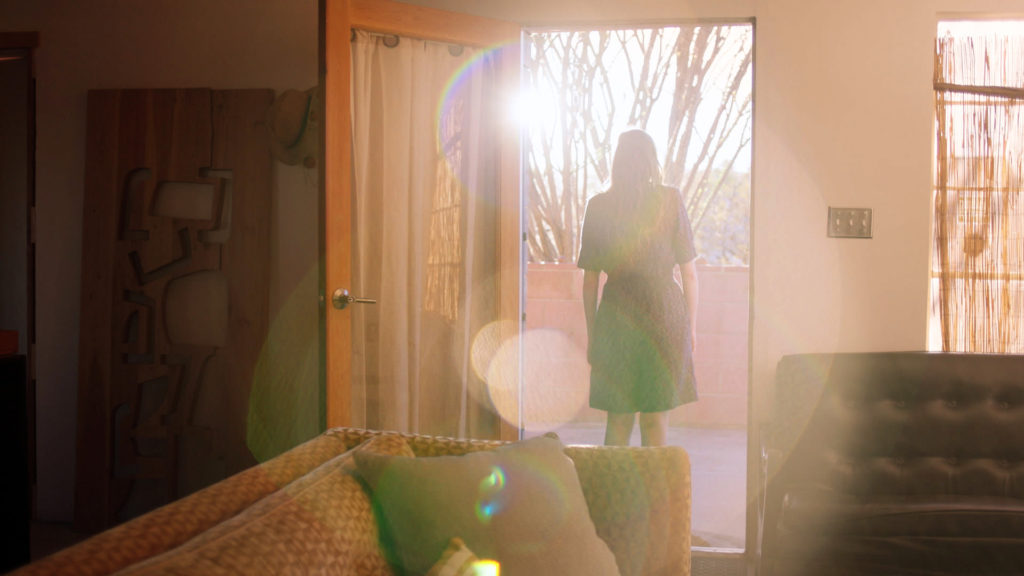 She Dies Tomorrow is a tough nut to crack. On the one hand, it’s a strikingly original and clearly very personal exploration of the nature of depression (I imagine it’s no coincidence that Sheil’s character shares a name with her director). Seimetz is a filmmaker who’s been on the verge of breaking through to the mainstream for years now; most closely associated with the “mumblegore” movement of smart, low-budget indie thrillers which bridged the gap between the torture-porn doldrums of the 2000s and the auterist horror renaissance of the 2010s (she directed 2012’s Sun Don’t Shine, and appeared prominently in Ti West’s The Sacrament and Adam Wingard’s You’re Next), she recently raised her profile by directing a handful of fantastic episodes of Atlanta. Stylistically, She Dies Tomorrow is a major step forward in Seimetz’s career, proving both her eye as a director and her unique viewpoint as a writer.

Yet She Dies Tomorrow is also so consistently downbeat and morose that it’s difficult to fully recommend. Save for a handful of bittersweet flashbacks, Amy spends the entire film in a state of end-it-all sadness, and the rest of the characters only get to play one scene each before they join her. It’s compelling, and the actors are uniformly excellent, but it’s also not a particularly fun world to spend an hour and a half in– especially if, I don’t know, something is already bumming you out going in. While the tone is obviously a big part of the point, it’s also so unremittingly unpleasant that I found myself checking my watch.

She Dies Tomorrow is at its best when it leans into the black comedy inherent in the premise; take, for example, a scene in which Amy rents a late-night dune buggy, asking an oblivious salesman (played by Seimetz’s You’re Next director Adam Wingard) exactly how fatal it would be to crash one without wearing a helmet. Unsurprisingly, the MVP here is Jane Adams. Adams has been a reliable scene stealer in indie film and television for decades now, and She Dies Tomorrow gives her perhaps her meatiest role since 1996’s Happiness. It’s clear from Jane’s personality and interactions with others that she’s got a reputation for drama even before her case of I’m-gonna-die-itis (her sister-in-law’s deadpan delivery of “Oh, look, everybody. Jane’s here,” speaks volumes), and Adams plays her with just the right balance of morbidity and kookiness. In the film’s best scene, she schedules a standard checkup with her doctor, only to derail the appointment with a long soliloquy about the many ways one might die unexpectedly. The scene is delightfully perverse, like a Brother Theodore monologue, and Adams plays it to the hilt. 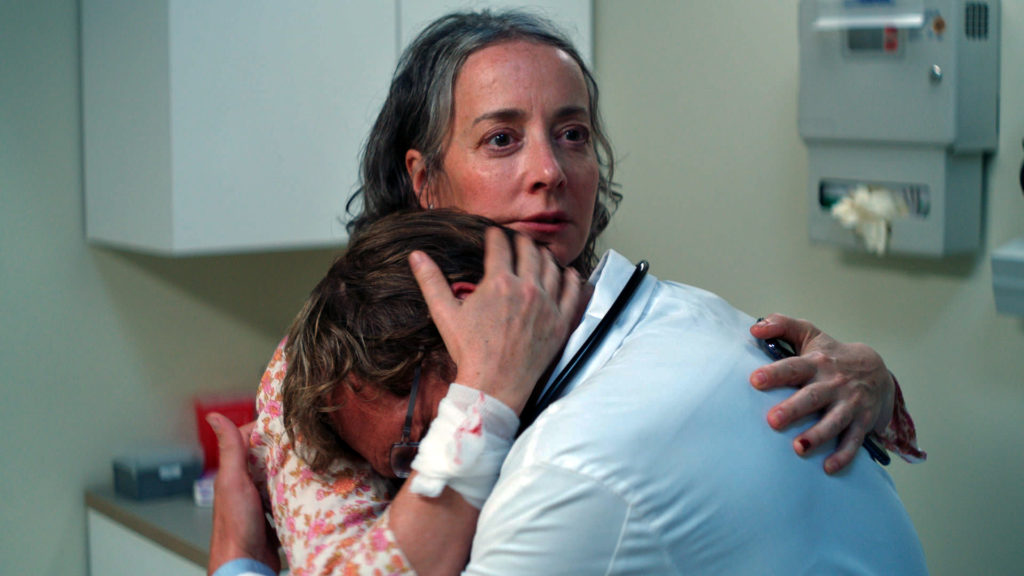 Too often, however, the film’s angst is played straight, and it comes off more mopey than anything else. Once they “catch” the delusion, the characters more or less sink into a single note of despondency and inaction, and become maddening to watch. In every scene, the characters intone back and forth about their impending mortality and their various regrets, and for every scene that escalates into dark lunacy, there are two which muddle along in the same minor key. The result is something like a straight-faced version of the “Tony” sketch from Kids in the Hall, in which the same scene of ennui is played over and over between different characters to absurd effect. Actually, maybe the better KITH analogy is an inverse of Brain Candy, in which we are doomed to relive these characters’ worst moments.

As a critic, this is the sort of review that’s hardest for me to write. I respect She Dies Tomorrow, and, on principle, I would love for more weird little movies like it to be made. But, for the most part, I just didn’t enjoy it, and I can’t think of many people to whom I would recommend it. Perhaps this is a me problem; perhaps there are those who will find this film’s cockeyed vision of a pandemic of depression cathartic in this moment, and I’m sure there are viewers with more direct experience with mental illness who will find this story a revelation. But my duty is to describe my own reactions rather than those of a hypothetical other, and the fact is this one just didn’t click for me. I do believe that Seimetz is a major talent to watch, and I’ll be very curious to see what she does next. But if I get to a point where I feel like revisiting She Dies Tomorrow, please send someone to come check on me.