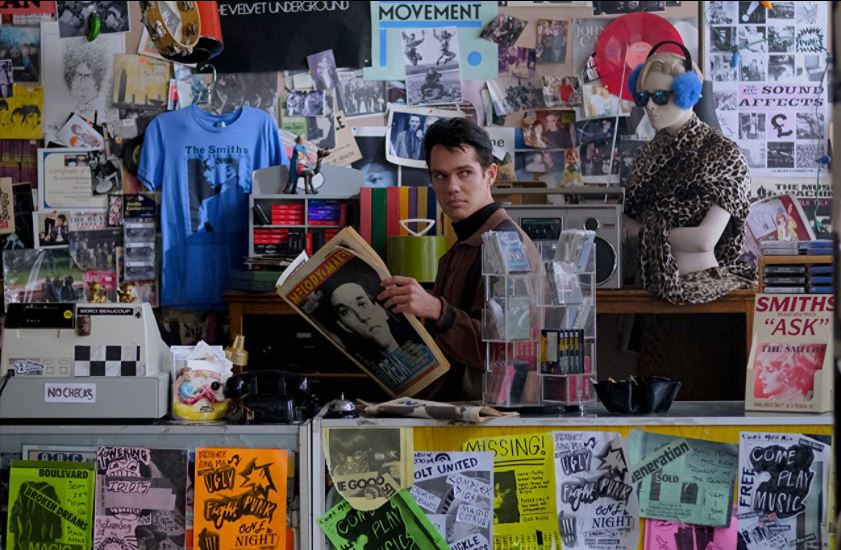 There is no roundabout way for a clever tagline without punning it up: Shoplifters of the World is a movie based on the Smiths, written and directed by Stephen Kijak, a definite Smiths fan. Talks of the film began in 2013-2014 and have gone through two cycles of casting (including Logan Lerman and Thomas Brodie-Sangster) before settling on Ellar Coltrane of Boyhood fame. Due to the fact that the film was shot in 2018, it may have seemed that Shoplifters of the World could have fit in a certain pre-bitter period of our lives, and may have also provided as a precursor to some of the latest odes to musical acts, like Blinded by the Light. Understandably, the tone between a movie using the Smiths and a movie using Bruce Springsteen is expected to differ in ambiance and direction, but maybe the idols’ lingering effects over the year might have their own shadow. Springsteen is living/laughing/loving on Barack Obama’s podcast while Morrissey is Old Racist Man Yells at Cloud.

Coincidentally, both Blinded by the Light and Shoplifters of the World take place in the last wisps of the ’80s. As Springsteen sparks joy for a British Pakistani teenager, the Smiths create their last overcast in Colorado, 1987. Though it’s based on an urban legend about a fan who held a Denver radio station at gunpoint so that they would play Smiths songs back-to-back, Shoplifters of the World is a one-night blanket fable of five teenagers who are reeling over the band’s announced breakup. Coltrane dips in black and beige hues to emerge as Dean, the teenager who holds disc jockey Full Metal Mickey (Joe Manganiello, another Smiths fan) hostage and forces him to play the band’s discography. The other four stumble and dance into the night, trying to immortalize their idols and kill notions of reality’s tomorrow. But make no mistake; they will stop the party and make you listen to the Smiths.

Those who are interested right from admission might enjoy Kijak’s Easter eggs, which exist supposedly within set design, dialogue, and what have you. I could only boast my knowledge as far as a casual listener, and that’s only because Louder than Bombs was a mood in college at one point, so I can’t speak to allusions beyond using “Strangeways, here we come!” in a sentence. However, one might feel wistful about a missing plot outside of explaining who the band is. The film doesn’t seem to care if it can’t persuade you to start listening to Morrissey. In fact, the teenagers’ insistence that most musicians, from Boston to Whitney Houston, actually don’t matter is a sentiment that can only be deemed as fucking annoying. Maybe Bon Jovi deserves to be dissed twice in different scenes (and in a way that doesn’t seem like it was supposed to be a running joke), but it becomes unbearable when a Smiths movie has to become a Smiths world.

Kijak is no stranger to the music-on-film format; he’s helmed pieces on subjects ranging from Scott Walker to the Japanese band X. I don’t doubt that he has the knowledge and outreach to make a Smiths documentary, set within the appropriate reflections of the time period without needing to use Getty-image fans of the ’80s, devoid of anything interesting other than their manic phases of joy and abandonment. I also don’t doubt that this could be a treasure trove of Smiths lyrics and images that I wouldn’t be able to detect on my radar, but because the film surrounds the premise of a myth (one that had been debunked around the time the movie was in discussions; the supposed gunner had been detained in the parking lot and never made it to the station), there is no other distinguishing story element that makes these characters interesting. You can almost make up a new movie and replace The Smiths with Twenty One Pilots and nothing would feel amiss.

But you know what? I’m going to listen to Louder than Bombs again after this, and maybe something in my cold soul will stir.

Available in theaters and digitally on Friday, March 26!