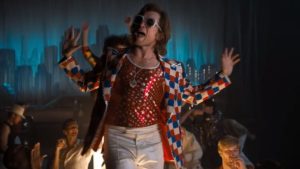 Clad in a sequined orange and red devil costume, head adorned with horns with black tips, feathered wings and heart-shaped glasses sliding down the bridge of his nose, an irritated Elton John storms into a mundane Alcoholics Anonymous meeting and sinks into a chair, huffing, arms crossed. He looks around, annoyed, at the quiet members, who stare at him.

“What’s a guy gotta do to get a drink around here?” he barks.

As the AA counselor questions him, he begins to calm down, and the frustrated, near-tears music man unfurls his story, told to us in flashbacks. Raised in the suburbs of England as Reginald “Reggie” Dwight by his cold mother Sheila (played by the lovely Bryce Dallas Howard) and supportive grandmother Ivy (Gemma Jones). Reggie is bothered by the lack of affection he receives, notably by his barely-there father (Steven Mackintosh), despite sharing a love of music. One day, he hops on the piano and plays a tune from the radio from memory. Shocked, his mother and grandmother agree that he should take lessons. The lessons progress and his teacher suggests a scholarship to the Royal Academy of Music. His father, who refuses to hug him and constantly puts him down, scoffs at the thought. His grandmother won’t take no for an answer and takes the young Reggie to the academy. 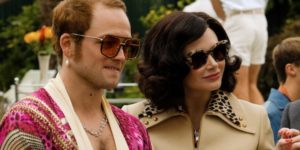 He looks up around him upon entering the school, intimidated, and asks, “Can I go home?”

“No,” his grandmother tells him. “There’s not many people who get these types of chances in life, Reggie. And this is yours.”

Through a musical-themed time jump packed with incredible choreography, Reggie (now played by the enticingly talented Taron Egerton) grows older, graduating from performing in tiny pubs brimming with obnoxious drunks to playing backup piano for touring American soul groups in the 1960s. “You gotta kill the person you were born to be in order to become the person you want to be,” he’s told during the tour. He takes the advice– he snags “Elton” from one of his fellow backup musicians, and “John” from a photograph of The Beatles’ John Lennon in music publisher Dick James’ (Stephen Graham) office, and a legend is born. James pairs Elton with Bernie Taupin (Jamie Bell), and the two begin a lifelong friendship packed with explosive lyrics and musicality that– unbeknownst to them–will go down in history. Together, they create “Our Song” in Elton’s childhood home, much to the awe of his family.

He plays venue after venue, each larger than the last. Despite his fame, fortune and talent, the loneliness and lack of affection that he felt during childhood lingers with him as he struggles with his homosexuality. It’s when Scottish music manager John Reid (played masterfully with charm and smarminess by Richard Madden) comes into his life that Elton believes that he maybe won’t be alone after all; maybe he will be able to be loved. Elton ditches James in favor of Reid, despite having been there from the beginning, but he soon realizes this was a mistake. Disillusioned by a visit with his estranged father (who had left and had a second family and two sons, whom he loves very much), Elton stumbles out of a cab and calls his mother to tell her about his relationship with Reid.

“I personally don’t care,” she says. “I just hope you know that you have chosen to live a life of loneliness. You will never be loved properly.” This is one of–if not the most–heartbreaking moments of the film. Egerton makes this isolation tangible with his facial expressions, his disposition, and how he stumbles out of the phone booth, almost comatose, grabbing Reid and gasping, “She said…she said I’d never be loved properly by anybody.”

Things begin to spiral out of control–Elton catches Reid cheating, and he treats his depression by self-medicating with prescription pills chased by rum and vodka. He can’t tell what city he is in while on stage. At a house party, he overdoses and tries to drown himself. He falls down his stairs and goes into severe cardiac arrest. He pushes those he loves most–his mother and Bernie–away, and becomes estranged from them as he tumbles further and further down the rabbit hole.

Rocketman is a biopic with sensational musicality, choreography, and stunning costume design. Specifically, my favorite scene in the film is a transitional piece in which Elton dances from childhood to early adulthood, going from a dimly-lit, seedy pub, through a drab alleyway, and into a carnival packed with dancers, who welcome him into adulthood–all while singing “Saturday Night’s Alright for Fighting.” It’s a brilliant, fast-paced scene that lures the audience in and doesn’t let them go.

Elton’s drive for love, to make up for the lack thereof he received in childhood, is also a highlight of the film. The emotional trauma that you see in his face–something Egerton is incredibly talented at–is present in every scene. You can feel his loneliness, his striving to be truly loved, and you ache for him when you watch this pain follow him into adulthood and poison the relationships he has with those around him. Egerton couldn’t have been a better pick for Elton John–his physicality, his tone (both singing and vocal inflection), and his disposition are a mirror of the famous rocker, all while keeping it from becoming caricature. Madden’s acting is, to no surprise, smooth and convincingly irritating–but that’s what makes him so enticing to watch.

Something so wonderfully poignant and fascinating about films like Rocketman that spin the stories about the music industry are the unhappiness that fame brings. You see it in everything from Almost Famous to Supersonic to Bohemian Rhapsody. Films like these get to the heart (or lack thereof) of the music industry, and tell these tales with a staggering honesty and brutality that reflect the vicious reality of show business.

Rocketman tells Elton John’s story with poignancy, with heart, and with grace, that makes you leave the theater with the lingering thought: am I who I want to be?

Opens Friday, 5/31 pretty much everywhere (though the Hassle recommends the Somerville Theatre or your local mom & pop multiplex).