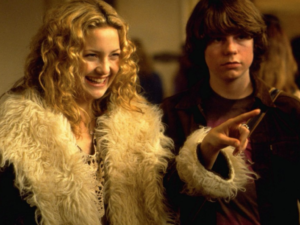 What do you love most about music?

If you smiled, and answered “everything,” then you should be seeing Almost Famous this Thursday at Somerville Theatre.

Cameron Crowe’s nostalgic, funny, and oftentimes sad coming-of-age film is about William, a sheltered suburban teenager with a fervent passion for music and writing in the glory days of rock in 1973. He strives to be a successful music journalist, and begins writing cheap reviews of bands around California. His passion leads him to being hired unseen by Rolling Stone, who requests that he follow and interview the reckless but talented band Stillwater for an upcoming feature. Against his overprotective mother’s wishes, William leaves his small town and ventures out to tour with Stillwater. Along the way, he has an eye-opening experience in which he learns about groupies, drinking, drugs, sex, rock, and life in the spotlight–which proves not to be as glamorous and exciting as he thought.

He befriends Penny Lane, a groupie who’s been with Stillwater for a while. She calls herself a “Band Aid,” because she isn’t just there to sleep with members of the band. “Groupies sleep with rock stars because they want to be near someone famous,” she explains to William, as she’s donning a fur vest and blue-tinted sunglasses. “We’re here because of the music. We are Band Aids.”

She and her fellow Band Aids take William in and look after him as the band’s Almost Famous tour of 1973 travels throughout America. Penny Lane and Russell Hammond, the band’s lead guitarist, have a romantic but turbulent relationship that frustrates her as she loves him, but he doesn’t love her back. While William interviews the rest of the band, Russell ignores him, constantly putting off the interview as time goes by and the tensions between the band rises. It eventually comes to a boiling point, and William realizes just how sad the life in the rock ‘n’ roll scene can really be.

The film’s soundtrack is nothing short of brilliant. It features tracks like “America” by Simon and Garfunkel, “Tiny Dancer” by Elton John (which serves as the film’s theme song, and lurks behind every few scenes, creating a wistful, haunting atmosphere to the already-poignant film), “Paranoid” by Black Sabbath, and “That’s the Way” by Led Zeppelin. I could go on and on–this film’s soundtrack is curated beautifully and goes well with every scene.

In addition to the soundtrack, the cast is also terrific. Frances McDormand as William’s overprotective mother is endearing and comical, as she just wants what’s best for her kids and understands that the life of a rock star is not what many think it is, even if her kids initially do not think she understands. Kate Hudson’s Penny Lane garnered the actress a Golden Globe. Her portrayal of a tragic, passionate woman who’s in love with music but realizes she’ll never quite be where she wants is moving. She’s by far one of my favorite characters in cinema.

Almost Famous is a film that I watch whenever it’s on–it causes a lump in your throat, but can clear it in the same scene with some humor to balance it out. Cameron Crowe is a master of narrative, and the way he portrays such a raw, wistful story about music, love, life on the road, and the dreams of a frustrated and passionate escapist is something I’ve never seen before. It’s the film that has influenced me to pursue music journalism, and a film that will continue to inspire me long after it stops rolling.