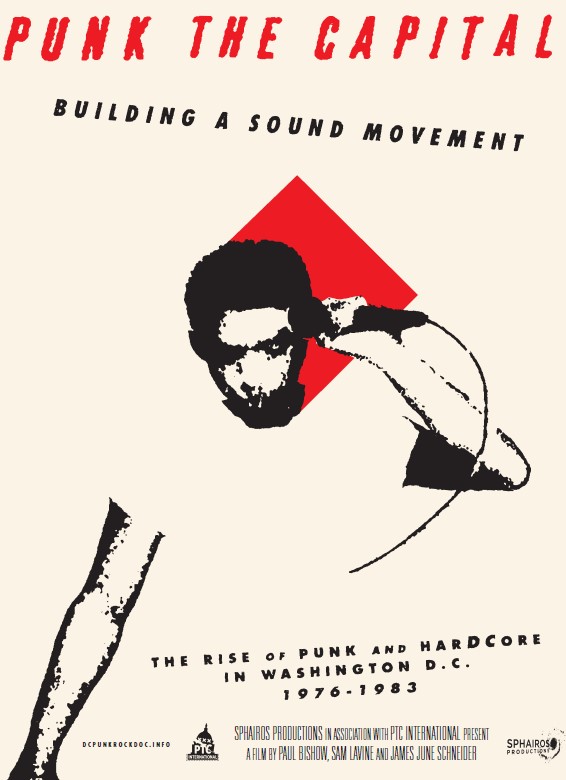 In an internet world where access to music is instant and robust (and has been for a good long while), it is rare to again be offered that punk-archaeologist-treasure-hunt feeling – the satisfaction of unearthing something, of that something being good, of seeing and hearing it at its beginning.

Thanks to Punk The Capital: Building A Sound Movement, you can have that again.

Punk The Capital offers “a new perspective on DC punk history,” specifically from 1976 to 1983. Coming into last Saturday’s screening at the Middle East Upstairs, I was most excited for the live footage – Punk The Capital features rare, never-before-seen live video of bands including the Bad Brains, Minor Threat, Void, and more on Super-8 film shot by a slew of folks, much of which was recently-ish found (and originally shot all those years ago) by one of Punk The Capital’s filmmakers, Paul Bishow.

Rare! Unseen! That treasure hunt feeling, folks. The live footage is visceral, fabulously sepia, and a fresh (and mildly grainy) glimpse at live shows from forty years ago that you’re definitely not going to find on YouTube.

And while that prospect may have gotten me in the door, viewers are gifted so much more. Punk The Capital offers a new and unique chronicling of early DC punk and hardcore, laying the framework for what mid-‘70s Washington DC felt like culturally (notably, “a wasteland”), punk’s DC beginnings in bands like The Slickee Boys, how the original Madams Organ art collective/Yippie commune served as an initial safe space for younger bands to play (and to perhaps sow the seeds for rebelling against a pro-marijuana ‘60s Yippies mindset), and later the 9:30 Club. The focus is broad, also paying special focus to Georgetown University’s WGTB, and film viewers are given a very real sense of the community that spurned a movement, its mindfulness and activism and attitude, including DC punk’s fast evolution into hardcore. The Middle East Upstairs was an interesting and apt venue choice for the Boston area’s afternoon screening last Saturday, especially for a film that highlights punk’s DIY spirit – the screening featured a projector screen on stage and thirty-or-so fold-up chairs set out in the pit of the space. Following the film was a Q and A with filmmakers Bishow and James June Schneider, as well as a special guest in Boston’s own Al Quint (Suburban Voice, Maximum RocknRoll contributor, likely needs no introduction). Bishow, Schneider, and Quint discussed the connection between DC and Boston hardcore, with Quint telling a few brief, nostalgic stories about seeing Minor Threat play the Gallery East space near South Station, as well as Bad Brains at Maverick’s in the Financial District. Most interesting to come out of the Q and A was an acknowledgement from Bishow and Schneider that Punk The Capital is just a snippet of a much larger body of work – a large chunk devoted to Scream, for example, was unfortunately cut from the film. That said, Bishow and Schneider noted that they’ve acquired an impressive archive of film, photos, zines, flyers, and more. While the filmmakers do not have plans for a future post-1983 Punk The Capital installment, they’ve collaborated with the DC Public Library’s Washingtoniana Division in establishing the DC Punk Archive where this slice of punk history (and beyond) has a permanent home.

While this isn’t the first DC scene-related doc to hit the market (Salad Days, Bad Brains: A Band in DC, the episode of Dave Grohl’s Sonic Highways, etc.), it’s a fantastic addition with perspective and film footage you won’t find elsewhere.