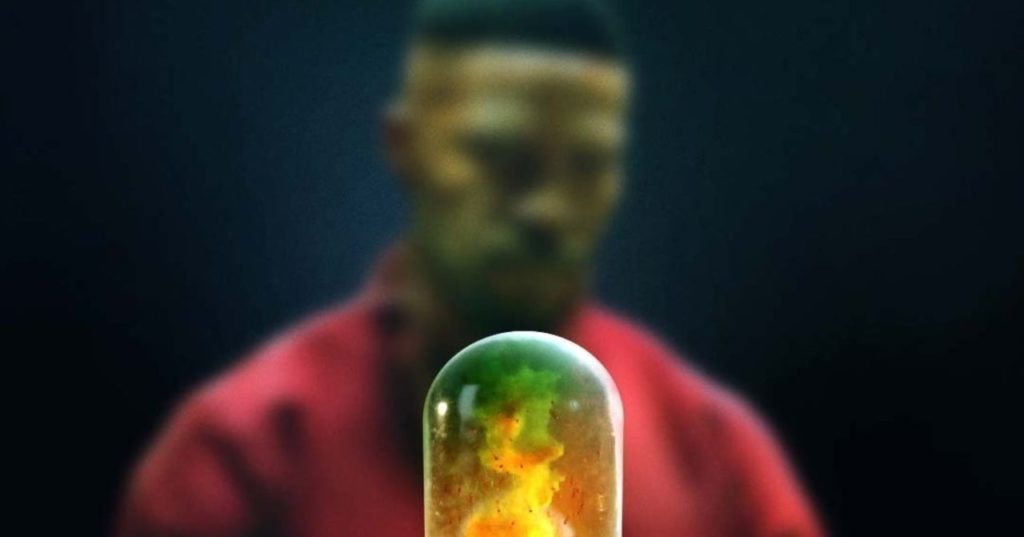 Netflix has decided to once again dip its toes into the action waters this weekend with the release of Project Power, just a month from Gina Prince Bythewood’s The Old Guard debut. Although both can reasonably be tied to this genre, the similarities end there. Taking a more Verhoeven-ish approach, Project Power uses the action/sci-fi genre as commentary on some real-world power dynamics, exploring how everyday people either coordinate with the plans of a violent upper class—whether of their own volition or out of necessity—or fight against these designs. Perhaps not as neat and refined as The Old Guard, the sort of pseudo-schlockiness of Project Power ends up adding a real dose of energy to the movie, making it engaging and lively.

In other words, Project Power is a pretty fun movie to spend two hours with.

The movie opens on a cargo ship on the coast of New Orleans, in which a well-dressed and well-coiffed Rodrigo Santoro (doing some great handsome-guy character-acting throughout) offers a group of more-shoddily dressed youths a shipment of a pill that he simply refers to as “power.” It’s initially unclear what exactly these pills do, but the movie slowly reveals that they bestow the user with a mutated, superhuman ability. This ability is specific to the user, and can be anything from self-combustion to enhanced speed to bulletproof skin. The drug makes its way throughout New Orleans, causing chaos for citizens, while the police force and government appear prevented from investigating the drug or its source.

In the middle of this, we’re introduced to Robin, a drug dealer selling “power” to support her mother; Frank, a cop trying to stop the destruction the drug is causing to his city; and Art, a man with mysterious ties to the drug who is likewise searching for his missing daughter. Their paths cross, and the three must race together to take down the source of the drug before it makes its way across the globe.

It’s an admittedly goofy premise that could’ve remained solely at face value, but instead the movie cleverly ties into real-life events in unexpected ways. With echoes of the alleged CIA-sponsored crack epidemic, the legacy of Henrietta Lacks, and the Tuskegee syphilis “study,” Project Power reflects a history of corporate and U.S. government exploitation of poor, and primarily Black, people. Setting the movie in New Orleans—a landscape first devastated by Hurricane Katrina and then further destroyed by corporate and government malfeasance—only further highlights the connection to this history.

Although the social relevance within the movie can be a little heavy handed at times, screenwriter Mattson Tomlin successfully translates a gross American legacy into his sci-fi/action flick and crafts a meaningful story of using one’s individual strengths in collaboration with others to break free from the systemic forces designed to tear people down. Tomlin’s screenplay is certainly not perfect, yet it is a refreshingly original framework to a movie that is thoughtful and fun. And, of course, screenplays are merely the framework to a movie, so it’s fortunate that Tomlin has a great directing and production team to build from his blueprints. Directing duo Henry Joost and Ariel Schulman (of Catfish fame) deliver some stylish and inventive direction with a bit of VFX flare (that works more often than it doesn’t). Some truly memorable action choreography and set pieces punctuate the movie’s more expositional or emotional scenes in rhythmic ways, which likewise help to overcome more weakly written and/or directed sequences.

Easily the standouts of the movie, though, are the excellent Jamie Foxx (as Art) and Dominique Fishback (as Robin). Foxx and Fishback are our guides throughout, peeling away the story and revealing it’s emotional and thematic resonance. They are so in tune with each other, as well as with the movie itself—understanding what kind of performance is called for in a scene, how that works within the movie as a whole, and what that means for a viewer. Their trajectory is the most fascinating, in part because theirs are the most well-developed and interesting arcs, but also because of their sheer onscreen skill. Frankly, it’s a shame that Joseph Gordon-Levitt (as Frank) doesn’t keep up with them, especially since he is ostensibly the movie’s third lead. In his defense, I do think he was woefully miscast. It’s mostly just unbelievable that Gordon-Levitt is a New Orleans native, a cop, or a New Orleans cop, no matter how very hard he tries to get me to believe him.

Miscasting aside, Project Power remains an exciting, if not entirely magnificent, action film. It’s rather easy to see that the movie isn’t quite expertly told for sure. But there is value throughout, in screenplay, directing, and especially, in performance. And, working in harmony altogether, they make for one enjoyable night in at the movies.