It’s sometimes difficult to talk about comic-book movies or superhero movies today without mentioning the Marvel Cinematic Universe, primarily because what Marvel did is rather exceptional in the grand scheme of movies, franchising, and storytelling, but also because so many movies attempt to do what the MCU has done. What’s rather extraordinary, though, is how unable to be replicated the MCU appears to be for other studios and franchises, despite many (Dark Universe), many (DC Cinematic Universe), many (Star Wars) attempts. It’s frustrating, because most producers don’t seem to realize that the MCU’s success was not born overnight from one Iron Man movie, but through years of storytelling and character building. When studios only see the dollar signs of the overall franchise, they begin to place more emphasis on franchise-building than on a single movie itself.

I think the John Wick series is probably the most successful franchise in recent memory to understand that a single, self-contained, good movie is better than a movie meant to hint at the potential for other movies—and that a single good movie tends to leave the audience wanting more. The John Wick movies are adept at giving just enough of  the fantastic world that the characters live in to add nuance and history to the rather streamlined story being told. These movies likewise place emphasis on character and emotion without ever feeling bogged down in detail after detail of the universe John Wick lives in, and this is precisely the kind of storytelling that enchants viewers. The best movies keep you wanting more precisely because there is simple depth to what’s in front of you, and because it earns your interest through creative, earned storytelling.

If it feels weird that I’m gushing over John Wick in a review for The Old Guard, it’s because I’m trying to find a nice way to say that The Old Guard is just not very good.

Based on a comic book of the same name, the movie is about a group of immortal mercenaries, reckoning with the arrival of a new immortal at the same time that they’re contending with a start-up CEO trying to harvest the immortals for life-extending medication and huge profits. Like many movies before it, The Old Guard seems ashamed of its source medium, while at the same time wishing to capture the successful franchising of other comic book adaptations. So, instead of focusing on things like characters, story, or even interesting action sequences, The Old Guard works overtime to try to manipulate the audience into thinking that they’re watching an already-beloved franchise. This has the negative effect of making it so nothing in the movie—character arcs, worldbuilding, plot twists—ever feels earned or … right even.

And maybe that’s the best way to describe The Old Guard: nothing ever feels quite right.

Some of this comes from the overwrought storytelling and some from the all-encompassing seriousness of the movie, as if every scene is another reminder that this isn’t like those other comic-book adaptations. The overall somber tone of the movie becomes a huge misstep for The Old Guard, as it ends up feeling so tediously heavy throughout that I found myself beseeching for any moment of variation and anything resembling humanity. When it does break away from this sobriety, however few times it does, The Old Guard does approach something worthwhile. In one scene in particular, two of the immortals share a melodramatic exchange of love in the middle of being held hostage by a group of hired soldiers. The dichotomy of the situation is funny of course, with their captors watching the performers’ soapy affectations, but it’s also emotional in a way that makes the performers come alive in the scene—it was one of the brief moments that I genuinely cared about any characters and wanted to know and see more of them. Similarly, Harry Melling playing the villain is the most interesting performance in The Old Guard, a sort of Mark Zuckerberg by way of mad scientist. He sometimes seems to be able to break out of the restraints being placed on the whole movie, and it plays off of Charlize Theron and Kiki Layne’s perpetually unsmiling characters like gangbusters. Unfortunately, the unceasing sobriety of the whole movie returns to restrain every performer and scene, effectively inhibiting any sense of energy from gaining further momentum. 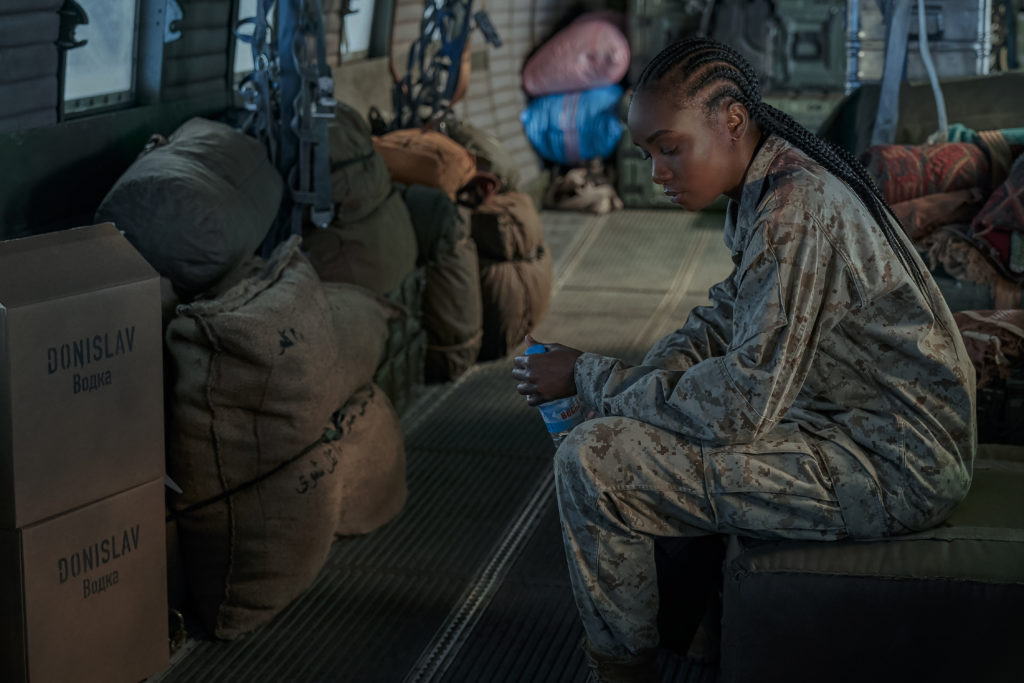 I do, however, admire Gina Prince-Bythewood’s direction, even if she doesn’t quite accomplish her ambitions consistently throughout. Her firm and warm hand is felt throughout the movie, and it is very welcome, as it highlights what little humanity and emotion can be found in The Old Guard‘s script. Her direction likewise proves to be a boon to the actors, giving them the opportunity to be actual people instead of near paper-thin devices for plot and franchise development. Through Prince-Bythewood’s eyes, the weight of immortality becomes something near-physical on the backs of these characters, and this idea and how each immortal individually reacts and processes their immortality is perhaps the most valuable aspect of the movie– that is, when it’s not being over-complicated with lazy character development or hacky writing. Where Prince-Bythewood tends to falter most is in her action direction, which is rather safe in the grand scheme of storytelling through action sequences, although there is occasionally captivating direction in the cramped settings these sequences sometimes occur in. A fight scene in an airplane is particularly memorable and actually delivers some of the most natural and developed storytelling in the whole movie, while also showing a little bit about the characters.

Outside of the effective direction, though, there’s very little to be inspired by in The Old Guard, and even less to talk about. It’s a movie full of competence, which is probably the worst best thing I could say about a movie. In its attempt to be deep, it is lifeless, and in its attempt to be epic, it is overstuffed and underfocused. It’s a shame that The Old Guard remains so steadfastly committed to franchise building, since its individual pieces—concept, director, cast—leave one feeling that something better could have come of the production. Instead, The Old Guard remains a compilation of teasers promising more later, and frankly, leaves one wanting anything but more.