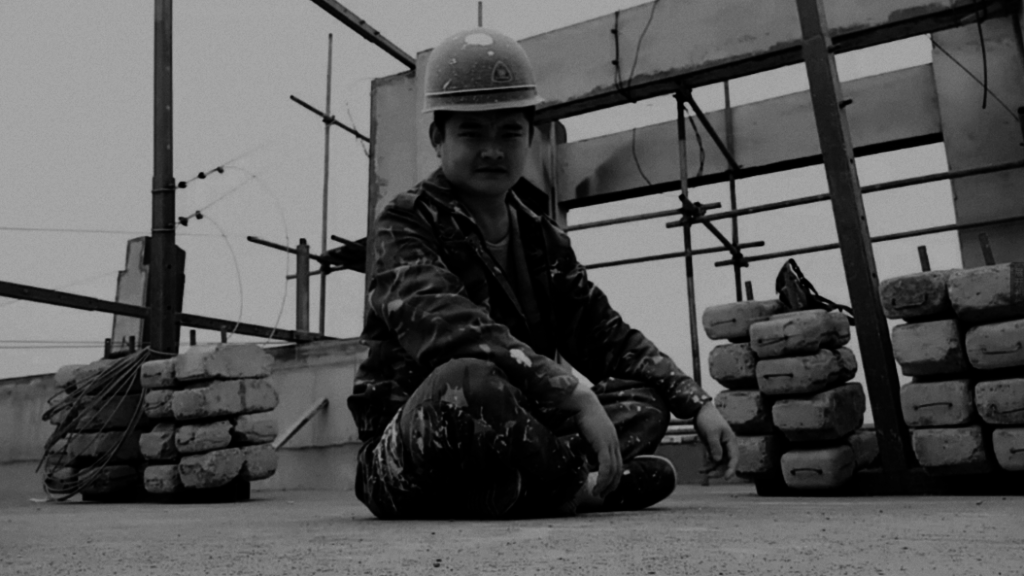 In no intended exaggeration, social media has evolved into a new dimension of living. Beyond the worn and beaten paths of VSCO girls and e-boys, it can be easy to forget how an online facade can coolly replace a personality or some remnants of a life’s truth. When director Shengze Zhu chose the “anchors” (hosts of live-streaming showrooms) to feature in her third feature, Present.Perfect., she looked past the fast-fashion gimmicks, which ranged from deadly parkour stunts to naked men wholesomely rolling around on a frozen lake, in the eight hundred hours of footage she’s collected for ten months.

Present.Perfect. opens in a silent composition of clips in eerie city settings. The classification of “found footage” best describes the video sequences of a construction crane moving a large wooden crate, the interior of an airplane’s cockpit, and the demolition of an already dilapidated house. The first spoken words clock in at the twelve-minute mark, where a girl gives a tour of her father’s pig farm before heading to the outhouse. There are several anchors that have their singular bits, but the recurrent ones include a seamstress at a factory, a street performer, a burn victim, and a man who has a growth hormone deficiency. They’re united by their candid natures in their lives despite the loneliness they face outside of the screen.

Spilling over two hours, nothing relating to a major character development arc ever happens throughout the film, which is most likely the ultimate intention. Zhu’s only interferences with the film include four boldly colored title cards that introduce the next “chapter,” laying out a monochromatic filter so that all clips stay consistent, and splitting the anchors’ storylines so there’s a break between the stories. Giving these stories a clear, linear ending would have distracted the viewer into creating a “goal” or “happy ending” for these characters when, in fact, they’re real people whose lives continue much after the documentary ends.

The secondary lens eclipsing over the film is China’s imposed Internet regulations that has started in 2016. Though the means of the censorship are intended to prohibit political criticism, authorities are known to monitor the live-streaming rooms to ensure that the content is within acceptable confines. In one video, a man’s “hobby” shows a bleeding cut on his arm, persuading everyone that it’s real but also mitigating the severity of the injury just in case the chatroom shuts down.

While the film may have adapted well to a shorter length time, Zhu’s background in photorealism translates well into building a platform for an uninhibited fascination for stories that aren’t often given the chance to be heard. The minimalist influences on her films (her previous piece, Another Year, spans over a family’s thirteen dinners without any interruption in flow) detach from the necessary need to complete an arc. Much further from P.T. Anderson’s bombastic Magnolia or even a subdued Miranda July piece, Present.Perfect. begins and ends with the introduction of a stranger, and the vague notion that you’ll see them again, in one face or another.

Special screening presented by DocYard at the Brattle Theater on 12/16, 7pm!
Director Shengze Zhu will attend in person for a post-screening Q&A.