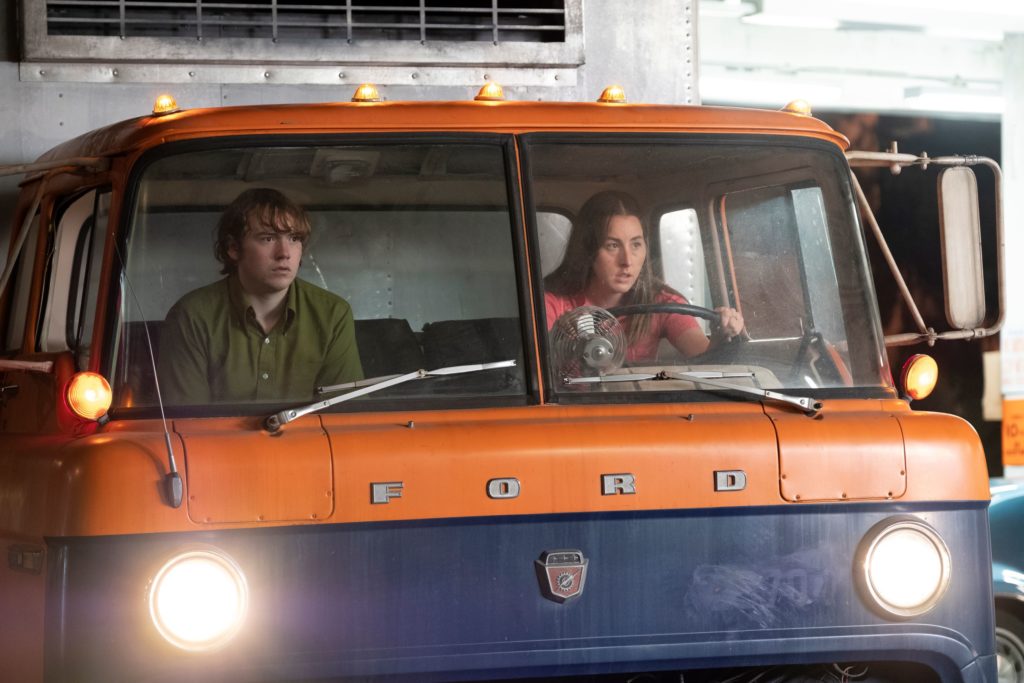 As far as the movies are concerned, the ‘70s are the new ‘50s. This makes perfect sense on its face; the goalposts of nostalgia shift with living memory, and from today’s vantage the take-it-easy Me Decade might seem just as idyllic as the days of Leave It to Beaver and Levittown. But there is an added dimension, particularly among the auteur set: the 1970s have widely grown to be considered the high point of American cinema, the brief window between the fall of the Hays code and the rise of the blockbuster in which film school mavericks like Martin Scorsese and Francis Ford Coppola ruled Hollywood. By setting one’s film in the ‘70s, one might attempt to capture some of the sheen of the American New Wave. The problem, of course, is that contemporary filmmakers are, well, contemporary. There is a certain daring shagginess to films of that era, a headstrong experimentalism fueled by the medium’s newfound freedom (and a good deal of the best drugs money could buy) which often defied logic and convention. Modern American filmmakers (and, perhaps more to the point, modern audiences) are conditioned by so-called “rules” of successful screenwriting. Today’s ‘70s period pieces might recreate the look of the decade, but they rarely capture the feel.

Licorice Pizza, the new film by Paul Thomas Anderson, is an exception. More than most ‘70s-set nostalgia pieces, Licorice Pizza could in many ways pass as a lost artifact of the era, with all the meandering cul-de-sacs and moments of unconventional beauty that suggests. Coming through in the last days of 2021, it is easily one of the most delightful films of the year, and one of the best.

The basic parameters of the story are laid out in its opening minutes: 15-year-old Gary Valentine (played by Cooper Hoffman, son of the dearly departed Philip Seymour) lays eyes on sarcastic 25-year-old photography assistant Alana Kane (Alana Haim, of the eponymous indie-pop trio) and instantly declares her “the girl I’m gonna marry someday.” Alana understandably rolls her eyes, but for all his corniness, Gary’s charms are undeniable: a self-described “song-and-dance man,” Gary has already appeared in the supporting cast of a hokey Hollywood musical and runs an ambiguously successful PR firm with his mother. When both of these careers putter out, Gary sets his sights on the then-novel waterbed fad, opening his own storefront and inviting Alana as his first employee. Alana shrugs and goes along with it; she still lives with her family (the real-life Haim clan, including Alana’s sister-bandmates) and doesn’t have a whole lot better to do than follow this little weirdo. 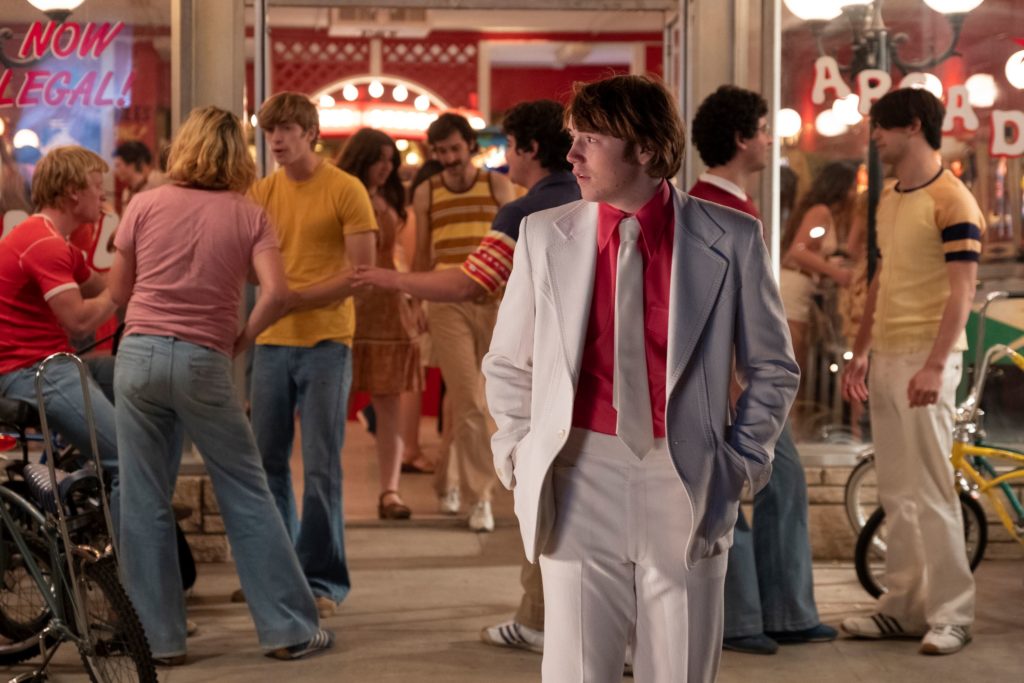 The above description makes Licorice Pizza sound like a romantic comedy, and to a certain extent I suppose it is. But it’s also something much odder than the typical boy-meets-girl narrative. Anderson seems less interested in getting from point A to point B than in spending time with these odd kids and their misadventures. Over the course of the film’s two-plus-hour running time, we follow Gary and Alana– sometimes together, sometimes separate– as they traverse the magic-hour suburbs of 1970s Los Angeles. Like Tarantino in Once Upon a Time in Hollywood, Anderson revels in the opportunity to play in this recreated sandbox, drawing in Hollywood figures both imagined (Sean Penn and Tom Waits as a besotted old-guard actor and director) and real (hairdresser-turned-producer/Streisand paramour Jon Peters, played with coke-addled brilliance by Bradley Cooper). Scenes don’t necessarily follow from one another– characters will appear for a few minutes, then not return for an hour or disappear completely– but rather build into an exhilarating whole.

It is in this way that Anderson most successfully captures the spirit of the Easy Riders, Raging Bulls generation. Just as plot summaries fail to capture the magic of McCabe & Mrs. Miller or Shampoo*, the magic is not in the mechanics of Licorice Pizza, but in the moments. Individual scenes, such as a hysterical interview between Alana and a talent scout played by Harriet Hansom Harris, crackle with the outrageous satire of Buck Henry, while the film as a whole sprints along with the breeziness of Hal Ashby. Like Ashby, Anderson captures a heady combination of cynicism and youthful exuberance and bottles them into something irresistible.

But also like Ashby, Anderson smuggles in a surprising amount of soulful sophistication beneath the hijinks. Licorice Pizza is, at its core, a coming-of-age story, but that story is not, as one might expect, Gary’s. On the contrary, Gary is essentially a cartoon character, a cross between Rushmore’s Max Fischer and Ernie Bushmiller’s Nancy whose successes and exploits strain all rational credulity (it is perhaps this element of fantasy which allows the film’s much-discussed age gap to play as whimsical rather than creepy). Alana, on the other hand, is an entirely realistic character, a sharp but burnt-out twentysomething who would be just as at home in 2021 as 1973. Over the course of their relationship, Alana’s arc is played against Gary’s lack thereof. Following a death-defying, gasoline-free downhill joyride in a moving truck, Alana decides it’s time to grow the fuck up and volunteers for local progressive political candidate Joel Wachs (filmmaker Benny Safdie in a surprisingly earnest performance); Gary, in turn, uses Wachs’ politics as a springboard to open a get-rich-quick pinball parlor. As the story progresses, Alana seems to gain awareness that she is a character in a 1970s teen movie, and begins trying to escape its narrative.

Despite its widescreen scope and pedigree, there is a surprising intimacy to this film, as if we are watching the world’s most ambitious home movie. In a very real way, we are: in addition to the legion of Andersons in the credits (and a few other notable show-biz surnames– a Spielberg here, a DiCaprio there, the odd Nicholson), Hoffman is the son of one of PTA’s most faithful collaborators, and Haim and her sisters have collaborated with the director on a string of successful music videos. Both are here making their big-screen debuts, but they carry the film with warmth and energy (Haim in particular is a revelation, well deserving of her Best Actress win at the Boston Society of Film Critics’ 2021 awards). Though both have showbiz roots, there is a refreshing outsider-ness to their performances; they, along with the other teens, don’t look or act like “movie kids.”

But all of this is just a long way of saying that Licorice Pizza is an absolute delight of a film, positively giddy with itself and the possibilities of its vintage setting. It contains enough gags and vignettes for several films, and even when one doesn’t land** it’s difficult not to get caught up in Anderson’s shag-carpeted world. As I type this it’s been over a month since I’ve seen Licorice Pizza (thanks to the film’s oddly staggered release and before-the-bell press screenings), but my mind has returned to it often, if only to sidle into a booth in one of the dimly-lit steakhouses/watering holes which Gary improbably frequents. My screening was in the early afternoon, and I walked out into the bright sun with the energy one gets from seeing a truly great film, my cheeks sore from smiling. Lord willing and the Omicron don’t rise, I’m excited to be able to see it again soon.

* – Probably not coincidentally, George Roundy, the playboy hairdresser played by Warren Beatty in Shampoo, was partially modeled after Jon Peters.

** – I should probably mention here the film’s other big Twitter controversy: a running gag involving John Michael Higgins as the white proprietor of a Japanese restaurant who speaks to his Japanese wife in an exaggerated mock-Asian accent. My take on these scenes is that Higgins’ character is clearly the butt of the joke here, but that the scenes in question are one of the film’s weakest bits and probably could have done with a second draft. As always, I encourage readers to come to their own conclusions, and seek out the opinions of someone whose experience mirrors their own.