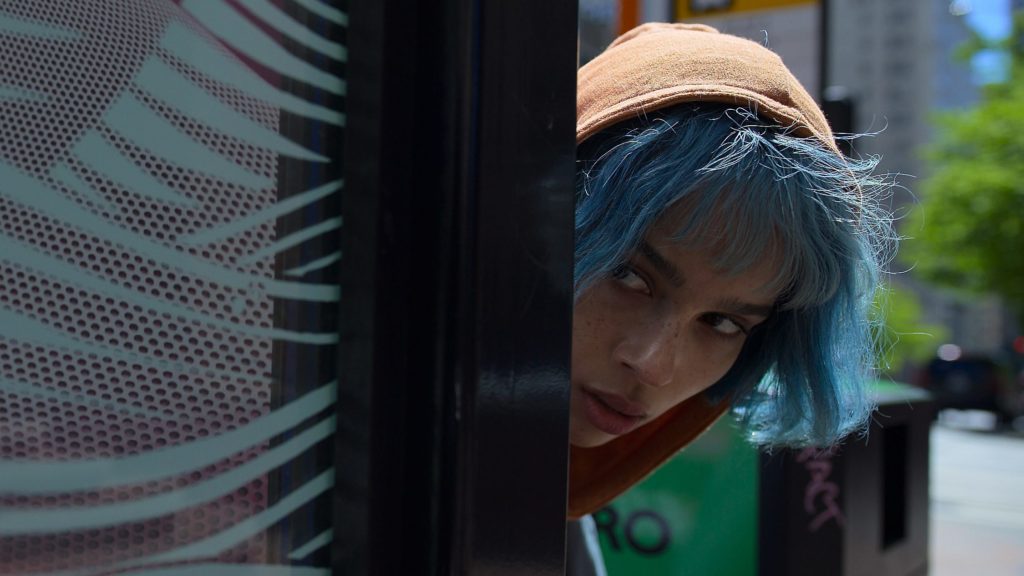 Before surveying the architecture of KIMI, I will preface this by saying that it seems to exist as a proverbial ramp to some greatness to be seen this year. Though Steven Soderbergh seems to be playing a game of genre darts with his HBO contract, life will feel somehow aligned with the third installation of Magic Mike (along with my adamant belief that Channing Tatum’s performance in XXL exemplifies a class of athleticism that surpasses the all-biceps-no-cardio men of Marvel).  Zoë Kravitz, who is now shopping for furniture in her now-permanent place in the main-role spotlight, will be cat-crawling from Hulu’s remake of High Fidelity (a show that managed to mirror both the original film’s greatness and a feeling that there could be something more) to The Batman this spring.

In KIMI, Kravitz’s Angela may just be a polar opposite of Selina Kyle. Seductive thievery isn’t a part of Angela’s wheelhouse; instead, she is IT support for KIMI, the virtual assistant created by the fictional Amygdala Corporation. What makes KIMI stand out from other products, an interviewer in the opening scene asks Amygdala CEO Bradley (Derek DelGaudio, whose credentials I recently learned as a magician might entice/offset his peculiar lack of presence on screen). Answer: human employees spend their shifts fixing translation issues between the user and KIMI (eg. a customer asking to play the song “Me” without meaning me or a kid using a vulgar slang word), optimizing KIMI’s personalization to the user’s needs.

The movie takes place in a somewhat slow lull of the COVID pandemic, which exacerbates Angela’s agoraphobia (though, in her lofty Seattle apartment, it would be difficult to consider escaping to any other environment). However, she is pushed to the edge of moral choices when she overhears an assault in one of her assignments. Every challenge in having this audio reach to the hands of justice seems to rely on her decision of leaving her apartment.

Perhaps you’re thinking it, but I’ll say it: KIMI will most likely be a non-entity in the scope of films for this year. The flaws that distract from the story and performances are too numerous to list in one sizable review, and to be frank, I’m not sure what Soderbergh was aiming for here. It comes across as a small-budget thriller that comes with all of the hoop-jumping but none of the stimulation. There are different bits that happen in the film that, when brought out of context, makes it seem like there could be three different subplots (including street protests against displacing the homeless and a life-threatening dental abscess). Maybe there are supposed to be different things to take away, but in the end, it’s Angela we follow to the end (or maybe to the other corner of the kitchen).

However, if you can let go and revert to our natural, wandering-eye state of passive network-quality piece, you might have some fun with this. Kravitz is able to box in the spirit of social awkwardness through her stiff powerwalking and conversation stoppers, which might have been a difficult feat to extract herself from her effortless Cool™ on and off set. The movie villains are cartoonishly terrible, which balances Kravitz’ ability to take them without needing to obtain extracurricular skills. In a podcast, Soderbergh revealed that this movie was influenced by The Conversation, Panic Room, and Rear Window. This may not be as far off, but KIMI reminds me of what a Jennifer Lopez-type role in the early 2000s would do in Home Alone. But instead of a girl, standing in front of a boy after pushing her abusive husband off a balcony asking if there is something more in life, Angela is just a tech worker looking to report to her tech superior. Hey, Soderbergh: how hard does it have to be?