When Hillbilly Elegy arrived in our peripheries, it seemed like it could be this year’s comeback for the expensive feel-bads that harbor a selectively present performance from an esteemed actor, where they can harness the power of subtitling the film as “that Actor Name movie” (poll: what’s That Matthew McConaughey Movie?). In addition to propelling Amy Adams’ small-town rollerblading strides from 2018’s Sharp Objects to another role of a woman shuttlecocked between Southern values and substance abuse, the film could have ambidextrously worked in Ron Howard’s favor, whose last great work was 2015’s race-car rival revelry Rush. Still, it’s a gamble to rely on a single person’s talent to carry a piece, and Hillbilly Elegy is betting on a game of gin with Adams and Glenn Close.

Based on a 2016 bestselling memoir by J.D. Vance, the film is the author’s reconciliation with his welfare-Ohio upbringings and his burgeoning, though clumsy, success at Yale Law School. 1997 J.D. is portrayed by Owen Asztalos, and by Gabriel Basso in 2011. Adams is Bev the mother, a convincingly disguised Close is Mamaw, and Haley Bennett is Lindsay the sister. As present-day J.D. tries to hodgepodge with law firms to score a summer internship in D.C. with his girlfriend Usha (Freida Pinto  — a sighting that invoked a once-in-a-blue-moon “Girl, what are you doing here?” response), he gets a call from Lindsay that his mother had been admitted to the hospital for overdosing on heroin. His emotions are overloaded with memories of his mother’s abuse, which predictably is a traditional cycle kept in the family. Despite it all, his good-man compass is pivoting and he rushes back home. 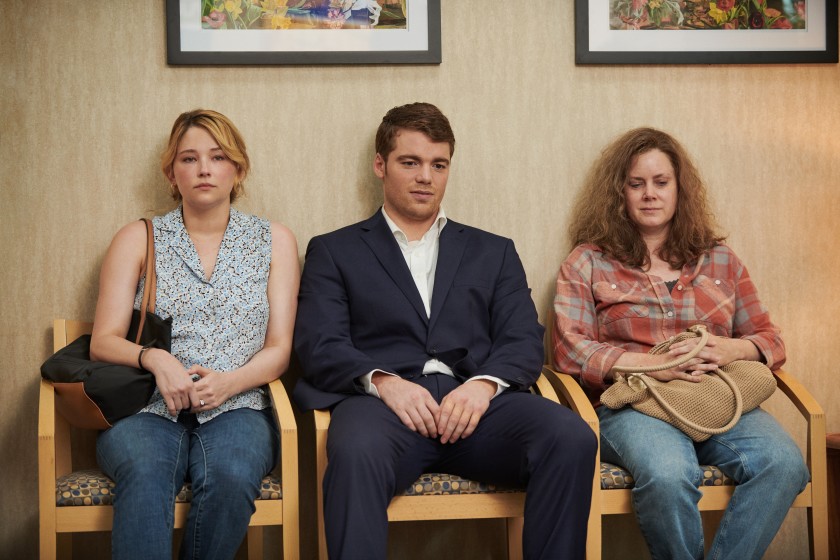 L to R: Bennett as Lindsay, Basso as J.D., and Adams as Bev

With its gorgeous views of green canopies placed in stark contrast with dilapidated housing and the Yale campus, one may find it easy to categorize Hillbilly Elegy as the “hicktorian” account of a man who grew up in poor conditions and worked his way to a prestigious institution only to find himself at odds with his identity. The main cast plays their roles with adequate redemption, joyous moments are strategically planted, and the formula works once again. But the biggest question looms: “Why adapt this?” The original book material became of public interest after the 2016 election, as it offered clear guidance to the Trump victory along the Appalachian ridge. But in promoting the work of a conservative Republican who seems to believe in the phantom cloud of meritocracy to excel in America, there is a sort of oddness in letting this story run free, especially since Vance’s statements about the poor white voter seem restrained in the film adaptation.

Howard largely depoliticizes the story of a white boy from Ohio who was able to go to Yale Law School, but there are observable moments that looked like what Vance painted in his memoir. When the medical team is trying to discharge Bev from the hospital that she had previously worked at for several years, J.D. contends to the attending physician, “This [hospital] is probably where this shit started, with the pain pills and the bullshit.” The Vances’ neighbors are in the same trauma loop, and no one escapes. This is all quite legitimate, but viewed through the lens of the only male who “gets away,” the discrepancy in “success” feels disjointed when his life is mounted against the women in his life. As Bev says to Lindsay during a dispute, “Just wait until you get pregnant…that’s what happens to girls.” While the obvious accounts that occur in Hillbilly Elegy are based on his actual life, I wonder if this saga would have been spicier if J.D. was a girl.

In front of us, the film presents outstanding acts by Close and Adams (though admittedly not the best for the latter), but feels hollow behind its motions and surroundings. It’s unfortunate that the characters’ emotions are palpable and yet dry, though it doesn’t help that Basso sometimes falters in his accent and conviction (Asztalos, however, is quite decent). Maybe, in some ways, it should have leaned into Vance’s commentary if it wanted to etch some sort of permanence beyond the yearly feel-bad. But like a magic trick, Hillbilly Elegy is here for the audience until at the end, it disappears with the rest of its purpose.