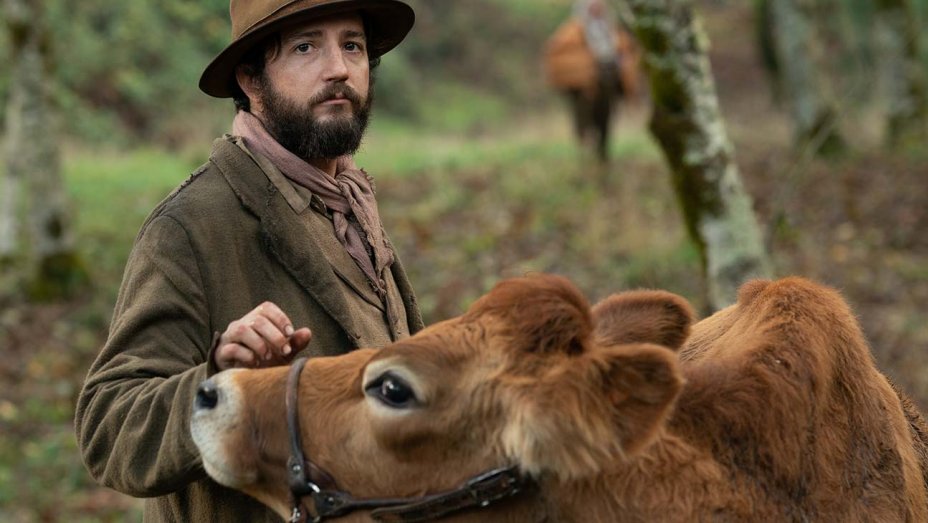 Kelly Reichardt’s films are usually very quiet, simple affairs (barring a dam explosion here and there), and First Cow is no exception. Reichardt’s adaptation of Jonathan Raymond’s novel The Half Life is a gorgeous-looking tale of a cook, a scammer, and the most beautiful cow ever featured in a title role.

Otis “Cookie” Figowitz (John Magaro) is a new arrival in the Oregon territory. A soft-spoken man, Figowitz just wants to start a new life on the west coast without much trouble. Unfortunately, that trouble finds him in the charming visage of King Lu (Orion Lee), a Chinese man who may or may not be on the run from the law. Lu convinces Figowitz to help him get to the next town, and Figowitz obliges. When they arrive, the pair learns of the first cow in the west, which has been shipped to local aristocrat Factor (Toby Jones). Lu realizes he could make a lot of money off the cow’s milk, and talks Figowitz into milking the cow at night and selling pastries during the day. The locals are too enamored with Cookie’s pastries to ask questions, and the money starts rolling in. Factor even hires Figowitz to cook for a visiting nobleman, and things only spiral from there.

Reichardt reveres nature, and every landscape in First Cow is gorgeous to behold. The natural sounds of the forest do more than any orchestra. Magaro and Lee are an excellent dramatic pair. Magaro plays Figowitz as someone who knows right from wrong, but has trouble advocating for himself, especially when he’s up against someone as charismatic as Lu. Orion Lee has had many small parts over the years, and it’s great to see him have room to really inhabit a role as fun as Lu. First Cow is a winner from start to finish, and much of the credit goes to Reichardt’s direction of these two men. The wilderness forges bonds, even between two men who might not be good for each other.

Though the modern day prologue (featuring Alia Shawkat) shows you this tale will end tragically, that knowledge doesn’t take away from the film’s inherent sweetness. Much like Cookie’s pastries, First Cow will leave you satisfied, but always craving more.