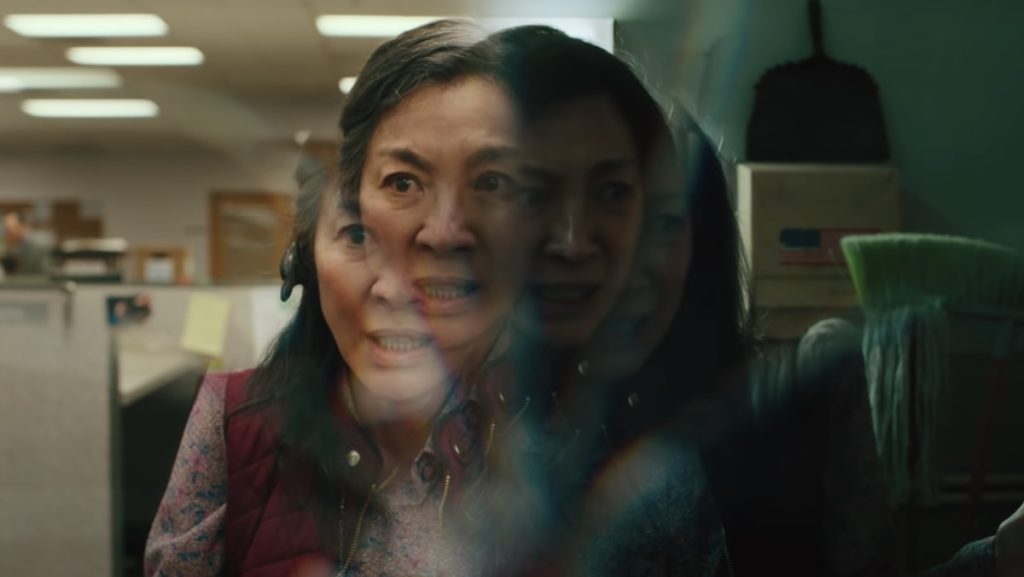 If you’ve seen the promotional material for Everything Everywhere All at Once, there’s no mistaking the growing influence the multi-verse has on cinema: a premise that had dwelled in fanfiction and comic storylines is now reveled in on the big screen. What seemed like a reliable idea for a television filler episode is the pulsing vena cava in Marvel’s current cinematic phase. Spider-Man and the Scarlet Witch have taken a ride in the “What If” carousel (and I’m not even talking about the Disney+ series of the same title), with Doctor Strange on deck later this month. The idea of infinite possibilities is a welcome mat for nonlinear structures and nonsensical fun to run the conventional out of house and home, even if the likelihood of losing the original focus is much higher.

EEAaO‘s trailer is an exceptional feat because the lightning-fast shifts in character design and non-contextual action scenes can make it difficult for even the most hard-pressed Reddit detective to approximate the plot. One’s thing clear: at the center of our universe is Michelle Yeoh (a star with her own rightful gravitational pull), who plays Evelyn. Pulled in different directions as a stressed co-owner of a laundromat, a neglectful wife to her husband Waymond (Ke Huy Quan), and a berating mother to her daughter Joy (Stephanie Hsu), Evelyn is in her red-giant phase of existential disappointment. She hasn’t had time to think about it, however; whatever American dream she had conjured up in her teenage years is buried underneath the pile of business receipts that she needs to hand over to the IRS, the party the laundromat is throwing that night, and her father’s incoming visit.

Before understanding what’s to come, it’s important to underline Evelyn’s characterization. She is a refreshingly true representation of Chinese nature and American nurture, which will have a familiar sting to those who have been raised in a household of brash verbal storms and silent offerings of love. It might be bewildering to hear Evelyn unintentionally misgender Joy’s girlfriend, which occurs not because she is trying to be rude, but because pronouns aren’t as clear in Mandarin. Still, her public treatment towards Joy and her girlfriend may garner some ill will towards Evelyn’s implied homophobia, even though she’s still reeling from the clash between learned beliefs and acceptance. In another instance, Evelyn runs after Joy before she drives away and tells her that she’s fat– this is the classic immigrant’s care-package sentiment. Whether Joy knows about this cultural incongruity might not be as important, but Evelyn’s jumbling identities and unrealized desires adds to the combustible fuel of disorder that is yet to come. 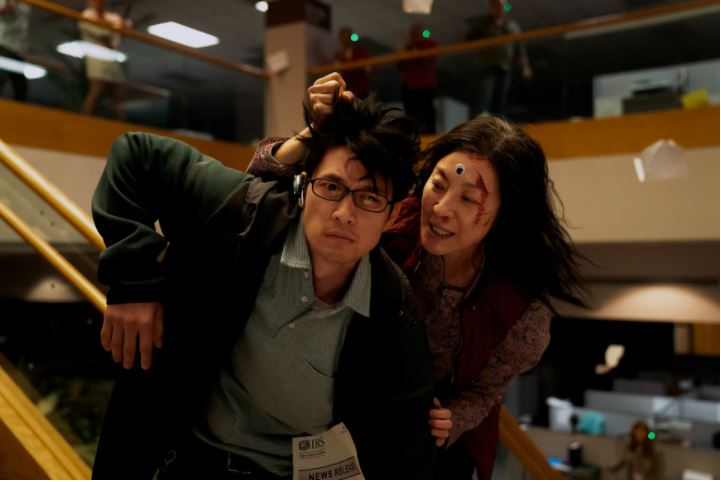 On the way to see her IRS agent Deidre (Jamie Lee Curtis), Evelyn is intercepted by Alpha-Waymond, an iteration of her husband from a dying universe. It might be more accurate to say that she is intercepted by Alpha-Waymond via the physical being of Waymond, who is unaware of the body takeover. Known as verse-jumping, versions of the same person can tap into each other’s universes by performing an unusual task, such as intentionally giving yourself papercuts or stapling a drawing of a black circle on your forehead.

Alpha-Waymond warns her of the imminent threat of Jobu Tupaki, a powerful being who plans on destroying all universes. Perhaps in the same reaction-manual used in a superhero origins story, Evelyn is not interested in valiant shenanigans. But as Alpha-Deirdre makes an appearance in her universe to kill her, Evelyn manages to unlock the skills of Martial Arts Evelyn — the Evelyn who decided not to leave China with Waymond and became a movie star (it was an actual treat to use footage clips of Yeoh walking down the red carpet as a depiction of MA Evelyn’s fame). After seeing how fulfilled her life in this universe seems, the newfound prospects throw Evelyn into a psychological and physical amalgamation of heroic responsibility, a reminder to find renewed purpose, and hellish fun.

Running free with the endless collisions with the multiverse, EEAaO‘s frenetic pace is a familiar rhythm for the directors (collectively known as Daniels). Though Swiss Army Man is in a specific league of weirdness, those who have seen their billion-viewed music video for “Turn Down for What” will know the kind of entropic eruption EEAaO will provide. I was hesitant to believe that people would be open to the ricochet-editing and raunchy humor tacked onto their sincere request to love this family. For me, surrealist pieces have the tendency to heighten my fear of the limitless and exaggerate lawlessness in a nihilistic way. But as Sorry to Bother You deals its cards in cynicism, EEAaO asks us to use our hearts to guide us through the turbulent nebulas. 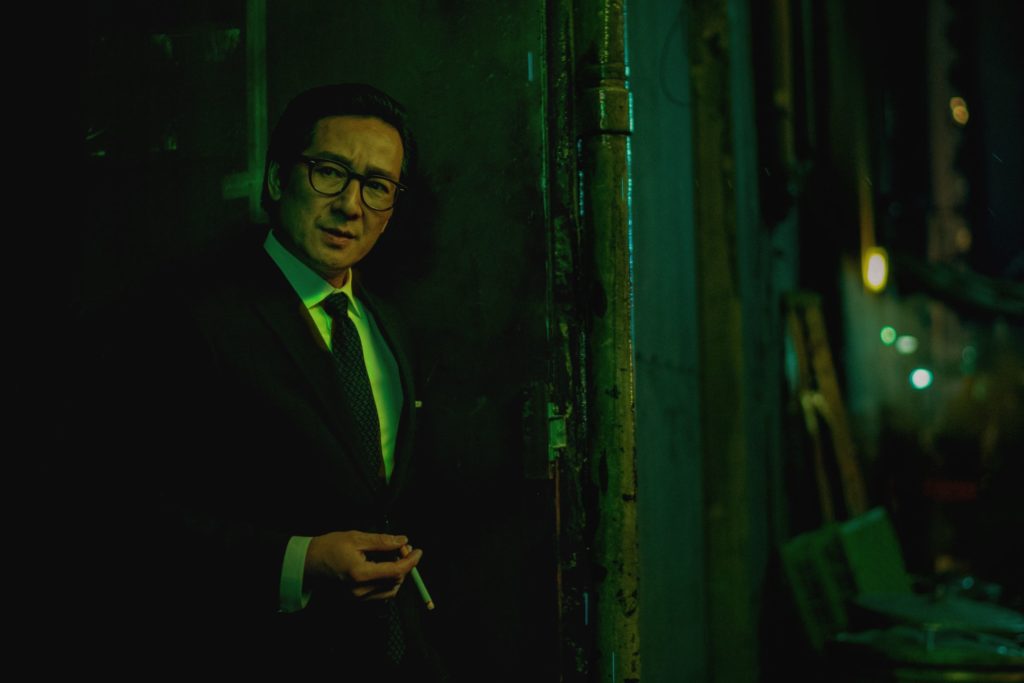 All of this is to say that at the highest tiers of the film’s glory is the united front of the cast. Yeoh’s performance is of a blue moon phenomenon — a hugely ambitious role in a grand-tapestry movie served by a long-standing talent. EEAaO would not exist without Evelyn’s flaws, and there would be no interest in Evelyn’s flaws if there wasn’t Yeoh’s promise to us that her character is going to be better and love better. Without spoiling too much, Joy’s complicated relationship with Evelyn heads into one of the most heartbreaking allegories about losing our attachment to meaning, which sharpens Daniels’ ragtag fun into a more keen and loving nuance behind the clutter. Quan, who came out of acting retirement after the success of Crazy Rich Asians, accomplishes the humble feat of the main actor playing the warm supporting role for Evelyn. From Khaki Dad to businessman in Wong Kar-wai lighting, he reminds us that everyone is someone’s center of the universe.

The most important takeaway about the multi-verse is that, despite the numerous outcomes that could have happened (14,000,605 in Infinity Wars), we live in the reality of the one outcome that came out this way. Instead of debating the significance of predetermination or the romance of serendipity, EEAaO reins in all corners of every facet in existence to say: What are we going to do next? The possibilities are everything and everywhere, but nothing is quite like here, in this moment.

Everything Everywhere All at Once
2022
dir. Daniel Kwan and Daniel Scheinert
132 mins

Opens Friday, 4/1 @ Coolidge Corner Theatre, and expanding to the Somerville Theatre and elsewhere Friday, 4/8
Check out the Hassle’s interview with directors Daniel Kwan and Daniel Scheinert!