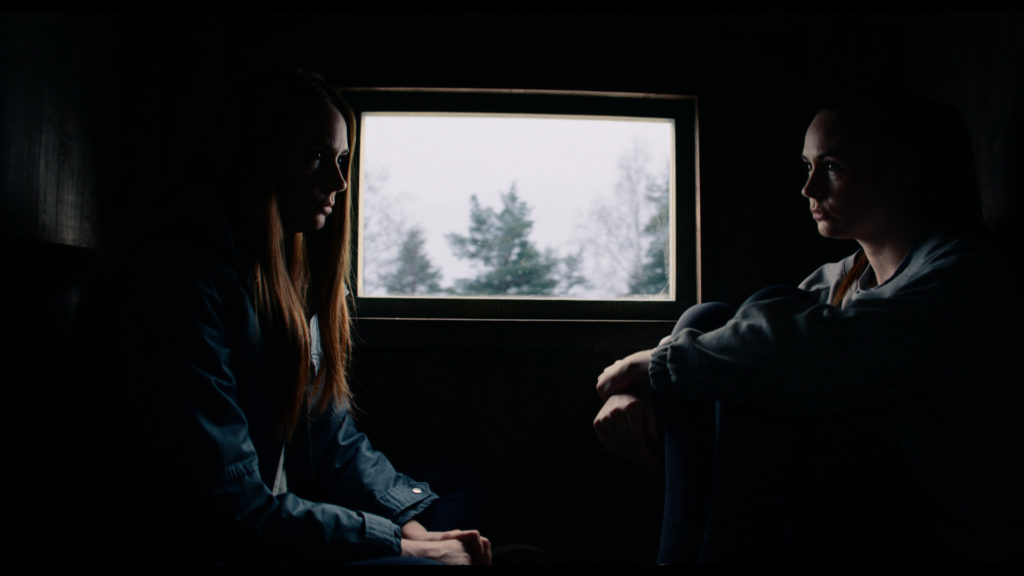 I’ll give this to Riley Stearns: there’s no one out there right now making films like him. His last feature, 2019’s The Art of Self Defense, takes what could be the premise for a lighthearted indie comedy– a nebbishy nerd falls under the sway of an ultra-macho karate instructor– and warps it into something dark, off-putting, and vaguely malevolent, while also maintaining the jokes and rhythms of the twee romp it might have been. Walking out of the theater I wasn’t at all sure whether I liked The Art of Self Defense or not, and hadn’t even quite made up my mind after filing my review, but I will give it this: I haven’t forgotten it.

I suspect the same will be doubly true for Stearns’ latest film, the transhumanist tragicomedy Dual. Shot during lockdown in chilly Finland, Dual is an even darker film than its predecessor, and even though I’m not entirely sure it works 100% of the time, it’s as haunting a comedy as you’re likely to see this year.

Sarah (Karen Gillan) is dying. This much is certain; even though she is quoted a 98% mortality rate, her doctor serenely informs her that the 2% margin of error is a mere formality (when she asks if there’s anything she can do, the doctor chirps, “You can begin to make funeral arrangements!”). In order to spare her loved ones undue heartbreak, Sarah opts for “replacement”: she commissions a perfect clone of herself, who spends as much time as she can absorbing Sarah’s mannerisms and interests, so as to step into her life as soon as Sarah departs. That’s the idea, anyway; Sarah’s Double (which is her legal name until she assumes her new life) immediately ingratiates herself with Sarah’s boyfriend and mother, who both agree that the new Sarah is an improvement on the original. Rejected, Sarah packs her back and moves out to live out her remaining days in solitude.

There’s just one catch: Sarah isn’t dying. No sooner has she retreated from her old life than her mysterious ailment goes into an even more mysterious remission, meaning there’s no reason she can’t live a long and happy life. Except, of course, for the fact that her double is still out there, and, per a constitutional amendment, the two Sarahs must engage in a (televised) fight to the death to determine which one will get to carry on. Realizing that she needs to at long last get her shit together, Sarah employs intense self-defense specialist Trent (Aaron Paul) and begins training to save her own life– now that she knows she has one. 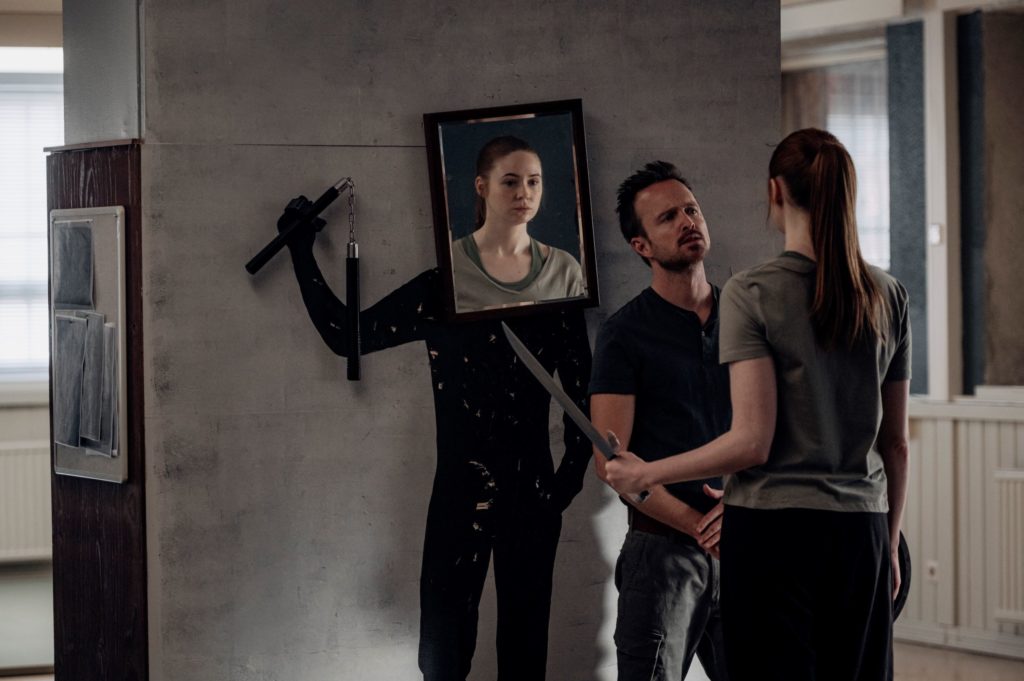 Dual is that odd sort of comedy which you may recognize as being very funny without doing much in the way of actual laughing. Televised deathmatch aside, the premise reads more like tragedy than comedy (the film in many ways plays like a mordantly funny counterpoint to this year’s After Yang), and the feedback-drenched guitar score by Red Sparrowes’ Emma Ruth Rundle wouldn’t be out of place in a horror film. The humor, then, is in the peculiar, deadpan way in which these characters interact with each other and the strange world they inhabit. The human characters appear to be just as alienated from the world as their clones; they are all deeply silly people, but rarely crack a smile (with the exception of the cheerful doctor who informs Sarah of her illness). It is a funny movie, I think– it’s just rarely funny ha-ha.

The most distinctive aspect of Dual is perhaps Karen Gillan’s performance, and I can’t quite decide whether it’s the film’s greatest asset or its biggest misstep. As a character, Sarah is not dissimilar to Jesse Eisienberg’s Casey from The Art of Self Defense: both are withdrawn, passive characters who are driven to unlikely extremes following a brush with death. Eisenberg is a natural fit for Stearns’ off-kilter world; he has a natural comic detachment which makes each of his characters feel like something of an ironic put-on, even when playing a real-ish person like Mark Zuckerberg. Gillan’s greatest strength, on the other hand, is her fundamental earnestness, and she’s made her name delivering quietly devastating performances in such fundamentally silly genre fare as Guardians of the Galaxy and Doctor Who. Gillan captures the melancholy of millennial burnout even before her diagnosis– dull video-calls with her boyfriend, ignoring calls from her mother, listlessly watching porn videos with titles like “Poolside Orgy in Backyard of CONFIRMED Haunted House”– and her realization of her mortality, whether by illness or by murderous clone, is genuinely heartbreaking. The film, then, becomes something of a tug-of-war between Gillan’s grounded performance and the often ludicrous dialogue and situations she’s placed in. 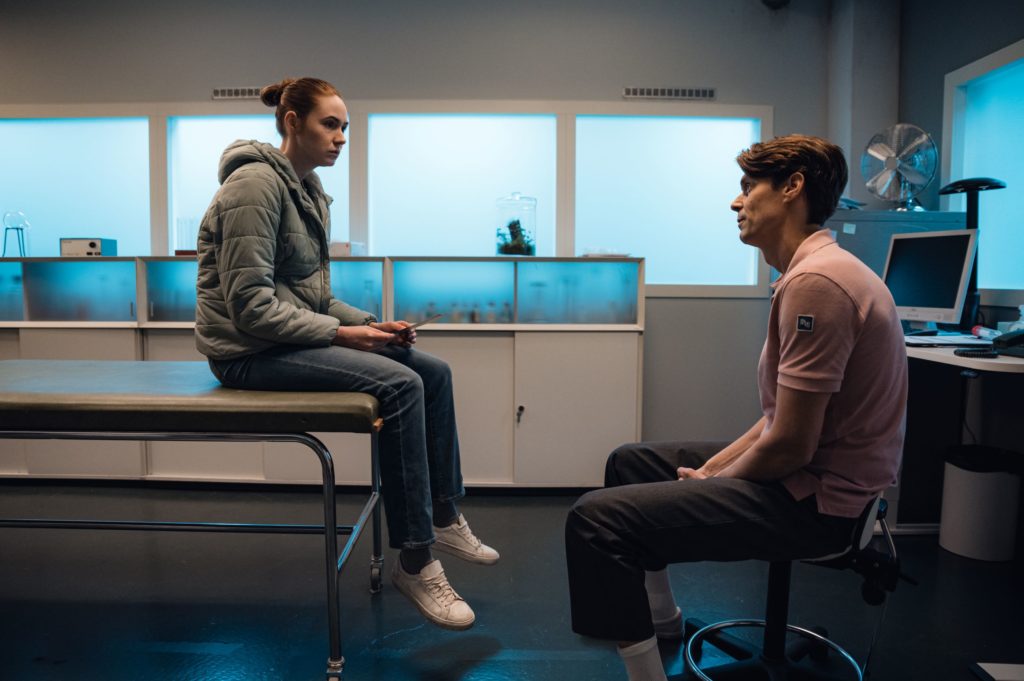 The problem is that this is a battle that Gillan handily wins. As a writer of dialogue, Stearns is as idiosyncratic as they come, but he doesn’t quite have the assuredness of a Wes Anderson (or even an M. Night Shyamalan). His worldview is distinctive, but not always as cohesive as it feels like it should be. In the case of Gillan, the writer and the actress seem to be at crossed purposes in ways that don’t always feel intentional. To be sure, the disconnect between these deathly serious characters and the ridiculous words in their mouths is a huge part of Stearns’ MO, but the fact remains that Gillan’s performance often feels too strong for the screenplay to support.

Still, there are enough memorably bonkers scenes to warrant a look. At one point, Trent hands Sarah a series of burned DVDs of preposterous gore films in an attempt to desensitize her to violence (“It’s not very good, but there are some images I want you to see”). Later, Trent’s offer of “alternate forms of payment” comes to a hilarious payoff. (Throughout his scenes, Paul seems fully in tune with the goofy self-seriousness of Stearns’ world, and I truly hope they work together again in the future.) Then there’s the climactic showdown between Sarah and Sarah’s Double, which, while not what one might expect, is a masterclass of dark comedy.

But when I think of Dual, I suspect I won’t think of any of these scenes, but rather its sense of cockeyed melancholy, particularly in its final minutes. Like last year’s In the Earth, Dual falls into the canon of Non-COVID COVID Movies, in which the filmmaker channels the existential angst of lockdown into a moody genre parable. These films are almost always messy, because I don’t think it’s possible to have non-messy feelings about that period in our lives. Perhaps this is why I didn’t vibe with Dual as much as I’d have liked to; it’s got a lot of very strong ideas and very funny scenes, but they’re addled with a sort of pandemic brain fog. Stearns is a unique voice, and he may have a masterpiece up his sleeve yet, but I don’t think he’s quite arrived. Still, I suspect I’ll be returning to his strange little films, because there’s not much out there like them.