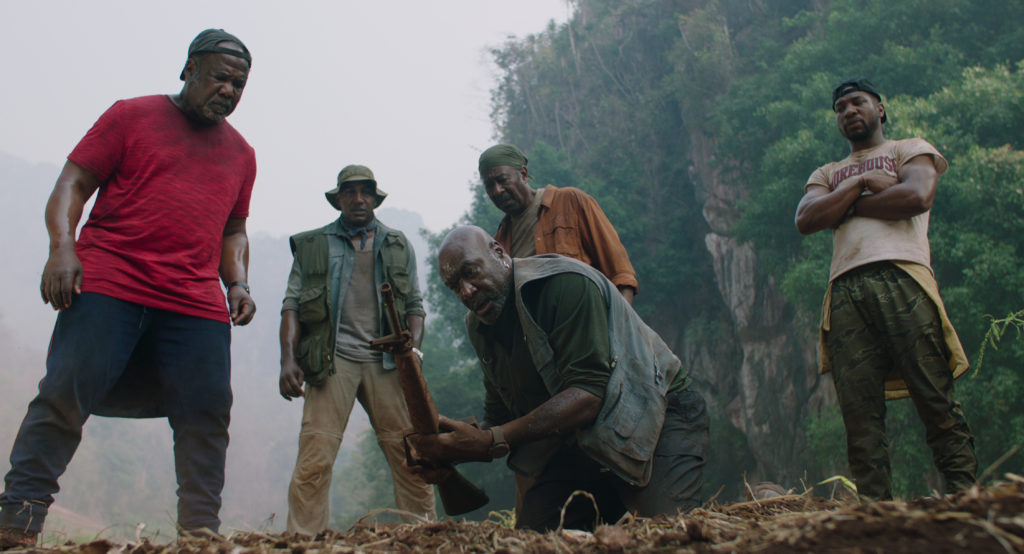 Way back at the beginning of the COVID-19 pandemic (which, as you’ll recall, was just over 75 years ago), I mused on the darkly fortuitous timing of the release of Kleber Mendonça Filho and Juliano Dornelles’ Bacurau. As I noted, Bacurau (which was among the first releases to utilize the now-familiar virtual screening model) taps into the same strain of righteous class frustration as Parasite, and, specifically, deals with an isolated town abandoned by its government to fend for itself on matters medical and social. Bacurau was obviously made before the outbreak, and probably would have been released in March one way or the other, but it felt eerily suited to its times, as if its circumstances were meant to be.

Cut to the present. America is rounding its third week of the most galvanizing civil rights protests in at least half a century, and possibly in history. Black Lives Matter protesters have been flooding the streets of every major city by the tens of thousands, their voices no longer possible to ignore. Calls to defund the police, once widely dismissed as pie-in-the-sky daydreaming, have started to see honest-to-god results. The president, who openly identifies with and champions white nationalists, is fanning the flames and encouraging violence, yet his teflon facade is beginning to crack. It remains to be seen what the ultimate outcome of all this will be, but one thing is clear: we are witnessing a historic point in the history of race relations in America.

Obviously, there is no way Netflix could have foreseen all of this last month, when they announced the June 12 release of Da 5 Bloods, the incendiary new war film from master filmmaker Spike Lee. But one thing is clear: there has never been a moment when America has more badly needed a new Spike Lee joint.

The Bloods are a group of old Army buddies who served together in Vietnam: Otis (Clarke Peters), Paul (Delroy Lindo), Eddie (Norm Lewis), and Melvin (Isiah Whitlock, Jr.). The fifth Blood is “Stormin’” Norman Holloway (played in flashback by Chadwick Boseman), the charismatic leader of the group who was killed in action in the jungles of Vietnam. During their exploits, the Bloods discovered a crate of solid gold bars, which they claimed for themselves and hid for safekeeping in the name of all the Black men who had given their lives for America, from Crispus Attucks on down. Unfortunately, their hiding place was soon buried under a rain of napalm, and the surviving Bloods were sent back to try to reclaim their lives, their treasure no less a ghost haunting them than Norman.

Until recently. A landslide in Vietnam has exposed some of the Bloods’ old battlefield, and Otis has spotted in satellite photos what appears to be the tailfin of the plane in which they hid their booty. Reaching out to an old flame (Lê Y Lan) and a shifty professional treasure hunter (Jean Reno), Otis arranges an expedition and reunites with his brothers in arms. Soon the quartet (along with Paul’s son, played by Jonathan Majors, who snoops his way into the voyage) return to the jungle, looking to find their gold and bring home the remains of their fallen leader. But the comrades soon realize that returning to the site of their greatest trauma isn’t as easy as it sounds– even before you throw treasure-hunting mercenaries into the mix. 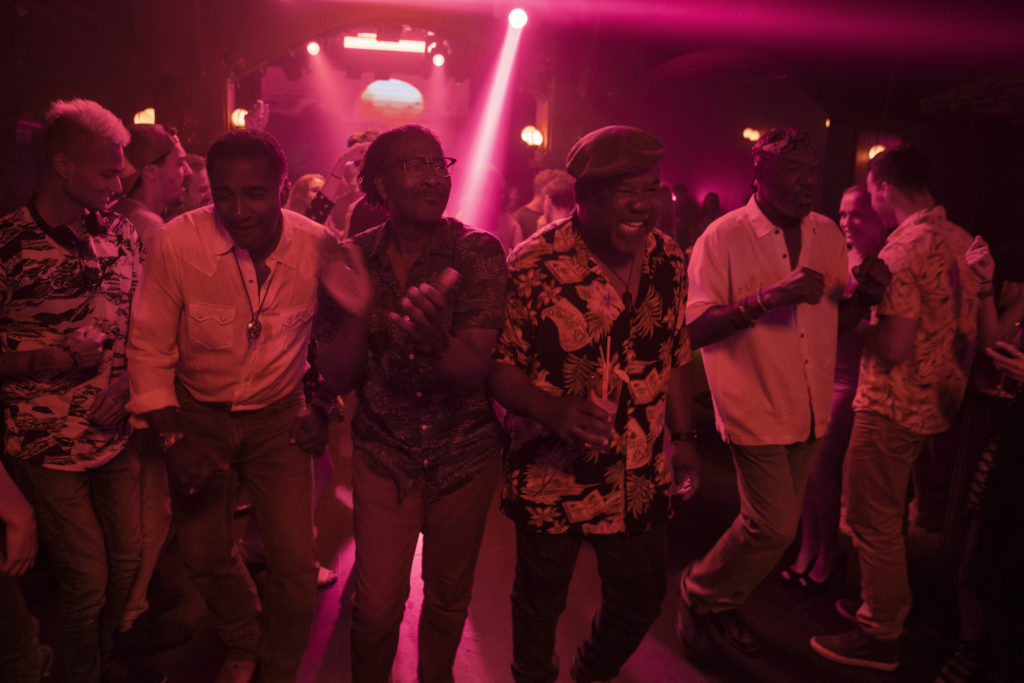 Da 5 Bloods is Lee’s first film since BlacKkKlansman, his roaring return to glory which netted him his first competitive Oscar and his first nomination for Best Director (both to the utter shame of the Academy). If there is a very slim silver lining to our current political hellscape, it’s that it’s given Lee a new lease on life and brought him back, guns blazing, as one of our most vital directors. What’s interesting about both Klansman and Bloods, though, is that they’re not only furious, but also some of the most accessibly entertaining films of his career. With Da 5 Bloods, Lee has cashed in the clout and goodwill generated by Klansman to create possibly his most expansive story since Malcolm X. Make no mistake: Da 5 Bloods is a war film, and when the story flashes back to the ‘60s, the battle scenes are as thrilling and deftly shot as any action films being made today. These set pieces, combined with the pulpy treasure hunt premise, are at times almost enough to trick you into thinking you’re watching a simple, rollicking adventure story.

But, of course, this is a Spike Lee joint, and you’d better believe he’s got something to say. The film opens with one of Lee’s trademark montages, mashing together everything from the Moon landing to My Lai to Angela Davis to Kent State in a dizzying few minutes that feel like they could have been ripped from this evening’s news. Despite the chummy camaraderie and jukebox soundtrack (in the closing credits, “Songs by Marvin Gaye” gets its own screen), this is no Big Chill-style slice of boomer nostalgia. The Bloods were Black men fighting in America’s most wrongheaded war at the height of the civil rights movement, and the confusion of their situation has haunted their entire lives just as much as the horrors of the war itself. At one point, the men learn of the assassination of Martin Luther King through a mocking broadcast from Hanoi Hannah, and Lee cuts to a five-way split screen to show the incomprehensible loss spread across each man’s face simultaneously. Hannah (real name Trịnh Thị Ngọ) was of course a real life figure who broadcast an English language radio show designed to sap the morale of American troops, but her comments addressed to Black GIs take a sympathetic (if probably disingenuous) tone, urging them to cease fighting a white man’s war. In most Vietnam movies, Hannah is portrayed as the insidious voice of the enemy; here, she’s essentially voicing the men’s conscience.

Much of the joy of Da 5 Bloods comes from watching its cast of veteran character actors play off each other. In the present day, the men share a sort of grumpy-old-men banter (Peters and Whitlock especially tear into the material, reunited more than a decade after The Wire), but Lee makes the ingenious decision to use the same cast during flashbacks, sans youth makeup or digital de-aging; the result is something like a stage play, allowing the aged men to embody their characters’ youthful selves, while also facilitating mindbending transitions signified only by their performances and a shifting aspect ratio. Boseman delivers an icon’s performance; he is, after all, Hollywood’s first headlining Black superhero*, not to mention Jackie Robinson, James Brown, and Thurgood Marshall, so one can easily accept the godlike thrall he holds over his friends. And Majors brings immense charisma to a role that could have been an annoying distraction; between this, his revelatory performance in The Last Black Man in San Francisco, and his upcoming starring role in HBO’s Lovecraft Country, I suspect we’ll be seeing a lot of him in the coming years. 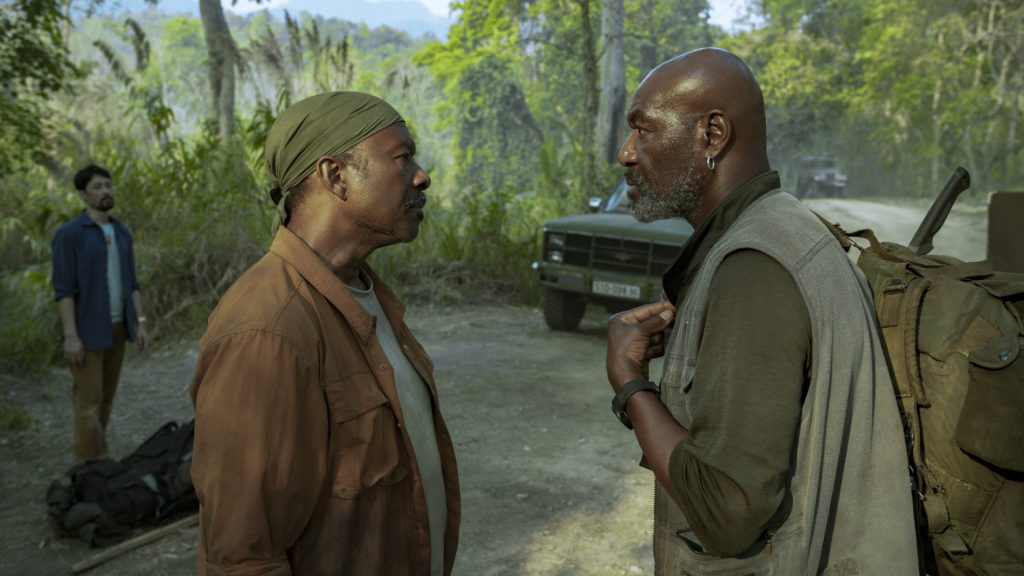 But the real story here is Delroy Lindo. Lindo’s Paul is the member of the group who clearly never quite left the jungle, his trauma compounded by the fact that he was the only one with Norman when he died. One gets the impression that Paul is a difficult man to like in his daily life, a distant father and a Trump supporter taken to wearing American-flag-Punisher-logo tees. But the further he returns to the jungles that changed his life, the more we see a portrait of a deeply damaged and sad man. In one extraordinary scene, Paul is accosted by a vendor on a crowded Vietnam canal, and, in an excruciating single take, we watch him sink into a full-on PTSD panic attack in real time. Paul is a tough nut to crack, alternately eloquent and sub-verbal, calculated and irrational, and Lindo plays every nuance with a meticulous series of microgestures. The result is easily one of the most rich and complex characters in Lee’s oeuvre– something I never thought I’d say about a character who spends most of the film wearing a Make America Great Again hat– and whatever or whenever the Academy Awards wind up being this year, Lindo will almost certainly be in the conversation.

At two and a half hours, Da 5 Bloods is a messy film, and some of the elements are more effective than others (in particular, a potential love interest between Majors and a French landmine diffuser played by Mélanie Thierry feels a little tacked on). But unlike The King of Staten Island, Da 5 Bloods earns its running time through heart, soul, brain, and moviemaking artistry. It’s almost tempting to wish we had time for more Trump-era Spike Lee joints, but I think we’ve had our share of monkey’s paw wishes the past few months, and Spike would probably strangle me for even joking about something like that. But regardless, he’s the filmmaker we need right now, and as much as I wish I could see it in a theater, the fact that Da 5 Bloods is being streamed into your home right now is tantamount to humanitarian relief.