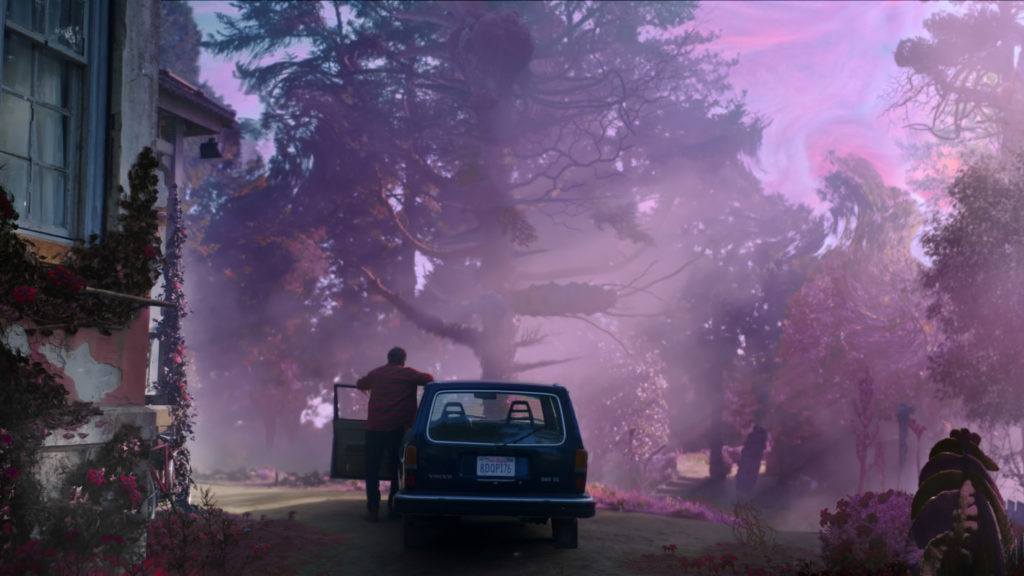 For one reason or another, there haven’t been a whole lot of “definitive” cinematic adaptations of H.P. Lovecraft. Once you narrow the field down to Lovecraft films that are actually any good (an act similar to flipping down 90% of the Guess Who tiles), you’re left with films which use Lovecraft’s basic plots as a jumping-off point for something altogether different (Stuart Gordon’s Re-Animator and From Beyond), a handful of impressively reverent but necessarily niche-y fan films (2005’s silent short The Call of Cthulhu), and a number of titles which adopt the author’s aesthetic and mythos without actually adapting a specific work (John Carpenter’s In the Mouth of Madness, and arguably The Thing). There are probably a number of reasons for this (not least of which being the writer’s virulent and barely-disguised racism), but chief among them is the fact that so much of what makes Lovecraft’s work terrifying is how difficult it is to envision. The central tenet of Lovecraftian horror is the idea of the unimaginable, of that which is so far outside the realm of human comprehension that to describe it is impossible and to look upon it is to go mad. To attempt to translate this concept to as visual a medium as film requires a filmmaker who is at once visually innovative, madly ambitious, and, perhaps, certifiably insane.

As it happens, there is at least one genre auteur who checks all those boxes in spades. South African maverick auteur Richard Stanley burst onto the scene in the late 1980s with music videos for the likes of Public Image Ltd. and Fields of the Nephilim before directing the post-apocalyptic cult classic Hardware and the nigh-indescribable horror-western head trip Dust Devil. His next-big-thing status was to be cemented with his studio debut, the 1996 adaptation of H.G. Wells’ The Island of Dr. Moreau. As anyone who’s seen the unmaking-of documentary Lost Soul knows, however, this was not to be: the film’s production was a legendary fiasco, and Stanley was fired partway through filming and replaced with old studio hand John Frankenheimer. This essentially put Stanley’s career on ice; while he’s popped up here and there, contributing to screenplays and occasionally directing segments for anthology films, it’s been more than twenty-five years since he’s managed to complete a narrative feature film. His profile has risen, however, following the release of Lost Soul, and a new generation has become hungry for What Might Have Been. What better comeback for this one-time enfant terrible than a seemingly unadaptable tale from a similarly cracked visionary?

Color Out of Space stars Nicolas Cage as Nathan Gardner, a down-on-his-luck alpaca farmer (!!!) living in the forests surrounding the perennial Lovecraftian locale of Arkham, Massachusetts. Gardner’s wife, Theresa, is battling breast cancer, his children Lavinia (Madeleine Arthur) and Benny (Brendan Meyer) are coping by retreating into teenage witchcraft and relentless weed-smoking respectively, and his farm is failing (“Alpacas are the animals of the future!” he insists against all evidence). The Gardners’ pitiable existence is turned on its head when a meteor crashes down in their field, emitting an otherworldly glow and attracting the attention of visiting surveyor Ward Phillips (Elliott Knight). In short order, things start getting weird: strange flowers begin sprouting around the crater, each member of the family is plagued with hallucinations, and their behavior becomes increasingly erratic. Can anyone survive, or will the entire town succumb to the eldritch? 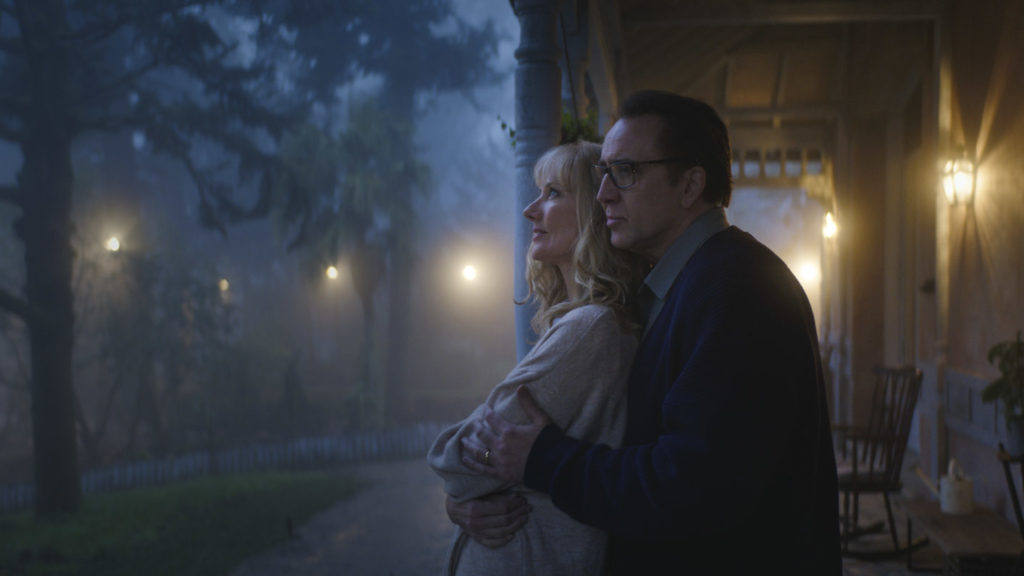 Those who require their horror to be grounded in relatable human behavior should probably look elsewhere. There’s probably no film on earth that can make “Nicolas Cage, western Massachusetts alpaca farmer” seem natural, let alone one that springs from the minds of known weirdos like Lovecraft and Stanley (indeed, there are hints that Stanley’s relationship with the modern world is anecdotal at best, as when a character struggles to find a dialtone on their iPhone). The exposition and banter between the characters plays as stilted and writerly at best (though Tommy Chong, as a local eccentric in the woods, seems at home in the altered strangeness). But anyone familiar with Stanley’s previous work knows that this is beside the point. In both Hardware and Dust Devil (a film I loved and could not begin to tell you what it’s supposed to be about), the dialog and characters are merely a jumping-off point for Stanley’s dreamlike, occasionally nightmarish atmosphere. And when Color Out of Space leaves the runway, the results are breathtaking.

While Lovecraft’s dialog about the color emanating from the crater being unknown to mankind doesn’t really work when we can see the color on screen (it’s called magenta, Nic), it’s difficult to care when presented with the level of visual invention on display. When the wheels come off and the shit starts to hit the fan, Color Out of Space is flat out gorgeous, with characters walking through fields of neon pink flora under a swirling, galactic sky. That the film has a lower budget than, say, Avatar I think works to its advantage; unlike that film, whose glossy CGI started to look garish and dated by the time it hit blu-ray, Color Out of Space has a personal, handmade feel that suits it well. (That its aesthetic recalls fellow Cage-starrer Mandy and last year’s Daniel Isn’t Real is no coincidence– all three originate from Elijah Wood’s SpectreVision imprint, which is quickly making a name for itself as a home for offbeat, psychedelic horror). Some horror films put you on the edge of your seat; this one will melt you to the back of it. 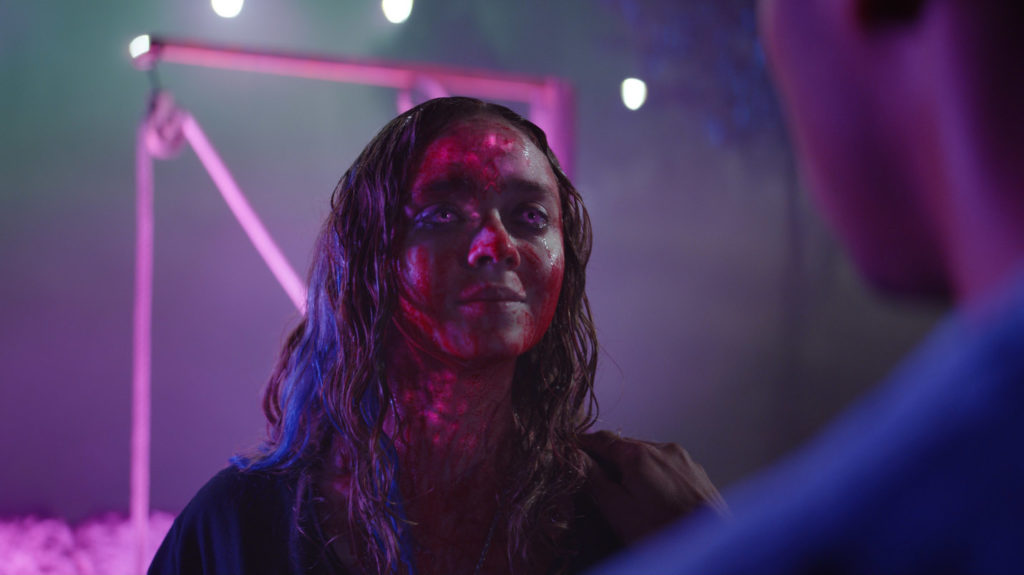 I dismissed somewhat the character-driven moments earlier, but I do want to call out the character of Lavinia. While it’s slightly misleading to refer to her as the film’s protagonist (it truly is an ensemble piece, and with the exception of Phillips everyone’s pretty much equally deep in the madness), the Gardners’ Wicca-dabbling daughter is probably the closest we see to a Stanley perspective character. Stanley is known for his penchant for the occult (as in the anecdote in which he attempted– seemingly successfully– to curse the production of Moreau), and his treatment of Lavinia is remarkably earnest. Her rituals are presented with a straight face (save, perhaps, for the amusingly meta touch of her mass-market paperback copy of the Simon Necronomicon) and feel more thought-out than most of the film’s human business. If you’re looking for an auteurial through-line, this might be your ticket.

Of course, this would require rational thought, which I imagine many watching Color Out of Space will voluntarily check at the door. This is a film to be approached less as a cohesive narrative than as an immersive prog-rock album cover. Its sights are so hallucinatory, and its horror imagery so inscrutably weird, that analysis is largely beside the point. I don’t indulge myself, but I feel comfortable in saying this is a good one to go in a little altered. I wish I could see it in a planetarium, laser show-style, and let it wash over me. Like a Lovecraftian horror, it’s difficult to describe without babbling– you’re best off seeing it on your own.