When I reviewed Luca Guadagnino’s remake of Suspiria late last year, I mused that it would likely take me some time to decide whether I liked it or not. I still haven’t quite made up my mind– I’ve warmed to some elements, and cooled to others– but I think I’ve finally gotten something of a bead on what’s been keeping me from fully loving it. In Guadagnino’s attempt to distance himself from his source material and justify his film’s existence, he creates a sense of being above the material. This isn’t just a horror film, he seems to say; this is a film about the Holocaust and the Berlin Wall and Baader-Meinhof and feminism and Christianity and the cleansing power of dance. The issue is not that these big, weighty issues don’t belong in a horror movie, it’s that the film doesn’t think they do, and tries to position itself as something other. This isn’t horror, it says. This is art.

I came to this revelation while watching Mandy, perhaps the most instantaneous cult classic of the past five years (which I’m somewhat embarrassed to admit that I missed on its first few theatrical engagements, but which I can attest is perfect streaming on a bleary New Year’s afternoon). Like Guadagnino’s Suspiria, Mandy draws inspiration from Dario Argento– in this case, his use of neon colors, pummeling music, and scripts that don’t always make perfect sense– and like Suspiria it is the sprawling, ambitious work of a rising visionary. But unlike Guadagnino, Mandy director Panos Cosmatos makes no distinction between trash and art. Mandy is lovingly assembled from a wide array of prurient obsessions– black metal and prog rock, pulp sci-fi paperbacks and ‘80s VHS splatter-comedies– all woven into a film both clearly personal and breathtakingly gorgeous. Oh, and also: it is fucking badass. 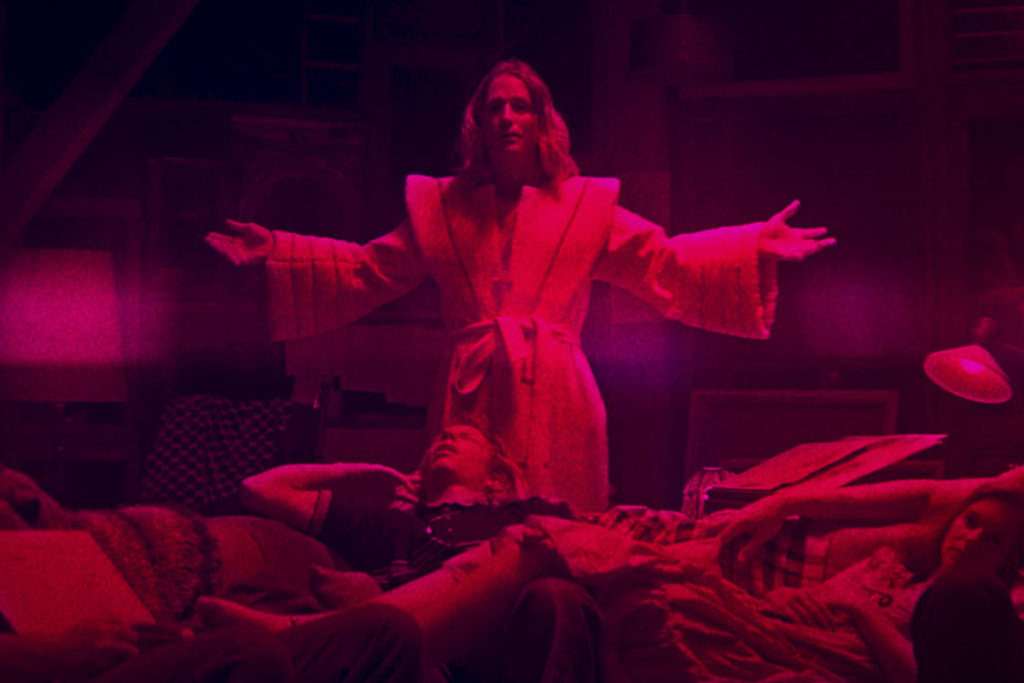 There’s not a whole lot of point in discussing the plot of Mandy, but if we must: Nicolas Cage plays Red Miller, a logger living somewhere in the Pacific northwest in the early ‘80s with his wife, Mandy (a curiously compelling Andrea Riseborough, unrecognizable from her turn in The Death of Stalin). Apparently by chance, Mandy catches the eye of a new age cult leader/folk singer named Jeremiah Sand (think Manson meets Heaven’s Gate via Lovecraft). One thing leads to another, and soon Red embarks on a Roaring Rampage of Revenge. But where in a plot synopsis do you include the forest-dwelling cannibalistic biker gang who may or may not be demons from hell (I’m not being coy here– you really can’t understand a thing they’re saying)? Or the periodic animated dream sequences? The all-knowing LSD manufacturer who lives under a radio tower with his pet tiger? The fact that Red, without explanation, has a massive cache of weapons stashed in Bill Duke’s trailer, and also possesses the tools and know-how to forge a ridiculously ornate battleaxe at a moment’s notice? How about Cheddar Goblin?

The “hook” of Mandy is, of course, Nicolas Cage, who, with this film, has officially entered the “Fat Elvis” stage of his career. That sounds like a snide put-down, but I really don’t mean it as such. By the time Elvis became the sweaty, jumpsuited star of TV specials and Vegas residencies, he had lost the dangerous sexuality that made a star, but he’d also spent the past couple of decades honing his stagecraft into something so ludicrously entertaining that, on a good night, it bordered on the sublime. Likewise, Cage’s days of legit Moonstruck stardom are likely behind him, but while he occasionally drifts into self-parody, he clearly knows exactly what he’s doing (and, I would argue, he always has). In Mandy, Cage is full-bore NICOLAS CAGE, screaming and covered in blood and cutting many, many heads off of their bodies. When Nicolas Cage is presented with material pitched at exactly the right threshold between high art and low camp, there is simply no one more fun to watch on screen.

But if Mandy were just The Nicolas Cage Show, it could have been just another Bangkok Dangerous. In fact, Cage spends most of the film’s first hour on the sidelines, a supporting character in his wife’s sad horror story. It is in these scenes that Mandy proves to be more than a simple Grindhouse clone, and positions itself as something strange and wonderful. Nearly every shot is suffused with swirling, CGI-enhanced colors, which, in combination with the lush, synth-heavy score (sadly, the last from the late, great Jóhann Jóhannsson), gives even the quiet moments a heady, dreamlike air. Nearly every frame could easily be airbrushed on the side of a van, and certain scenes (like the one our own Kyle Brunet cited in the Best Dialogue roundtable last week) are psychedelicized into something almost trance-like. Keep in mind, all of this happens in the portion of the film that’s essentially an intimate personal drama. THEN things get crazy.

It’s been said many times over that the 2010s have been something of a new golden age for horror movies. Indeed, in 2018 alone, there are several films that could reasonably be called “The Horror Event of the Year”: A Quiet Place, whose nifty high concept and soulful performances parlayed into astonishing box office success; Hereditary, whose devastatingly realized portrayal of grief and mental illness (in addition to shocking violence and terrifying demonic forces) continues to land it on critics’ year-end lists; Halloween, which provided a loving return to form for two of the genre’s most iconic characters; and even Suspiria, which, love it or hate it, is sure as hell something else. To that list I would add Mandy, a true-blue midnight movie of positively symphonic proportions. Sometimes you don’t need intellectual themes or layers of subtext to create a masterpiece. Sometimes you just need a chainsaw duel and a bitchin’ soundtrack.