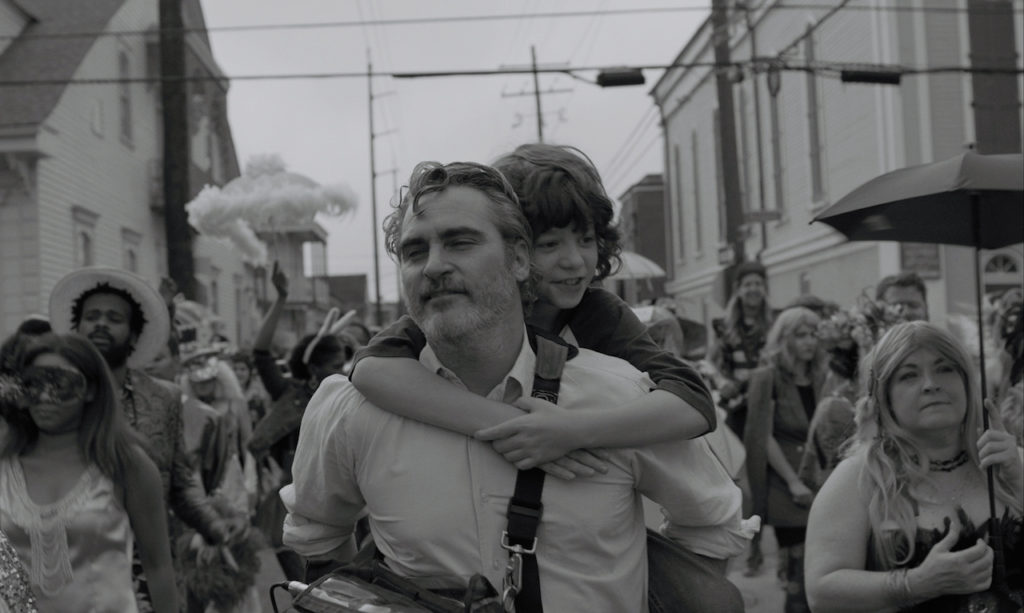 When one is asked to conjure the cinema of Generation X, a canon instantly begins to form: Singles and Slacker, Reality Bites and Sex, Lies, and Videotape. These films, directed by a legion of film school brats over the course of the ‘90s, present the Xers as a unified whole, disaffected and pop culturally addled, but still inherently youthful. The Xers still walk among us, of course, but now they’re middle-aged– creeping toward retirement, even– with kids and houses and square day jobs. X remains the lost generation they’ve always fancied themselves, drowned out between the online clamor of the Millennials and the Zoomers on one side and, on the other, the dying bellows of the Baby Boomers who refuse to relinquish an inch of their cultural dominance. But whatever became of the flannel-clad heroes of the Sundance classics of yore?* Where did their stories end up taking them?

C’Mon C’Mon, the excellent new film by director Mike Mills, is not a sequel to some long-lost Sundance classic, but it at times feels like it could be. Johnny (Joaquin Phoenix) might have once been that small-town slacker documenting his friends’ lives via camcorder; today he’s a radio journalist in the Ira Glass vein, traveling the country interviewing Real Life teenagers and editing the files in his stylish Manhattan bachelor pad. His sister, Viv (Gaby Hoffmann), is a former wild-child who’s managed to pull herself together enough to become a college English professor. The strain is still apparent, however, as Viv finds herself having to look after both her precocious nine-year-old son Jesse (Woody Norman) and her semi-estranged husband Paul (Scoot McNairy), a gifted orchestral conductor wracked with bipolar depression.

During an extended visit after a year of radio silence (the siblings, as is so often the case, found themselves at odds following their mother’s death), Johnny comes to visit Viv and Jesse at their home in Oakland, and sticks around to play babysitter when Viv is called away to San Francisco to help Paul through his current breakdown. Johnny has never cared for a child before, but he finds himself won over by Jesse’s eccentricities (the character could easily be read as being on the spectrum, but could also simply be diagnosed as “quirky as hell”). When Paul’s situation proves to be more complicated than anticipated, Johnny brings Jesse back to New York with him, where he serves as both a sort of production intern and a surrogate son. But as the days press on, the pair’s odd-couple relationship begins to wear on Johnny, and he begins to wonder whether he hasn’t bitten off more than he can chew. 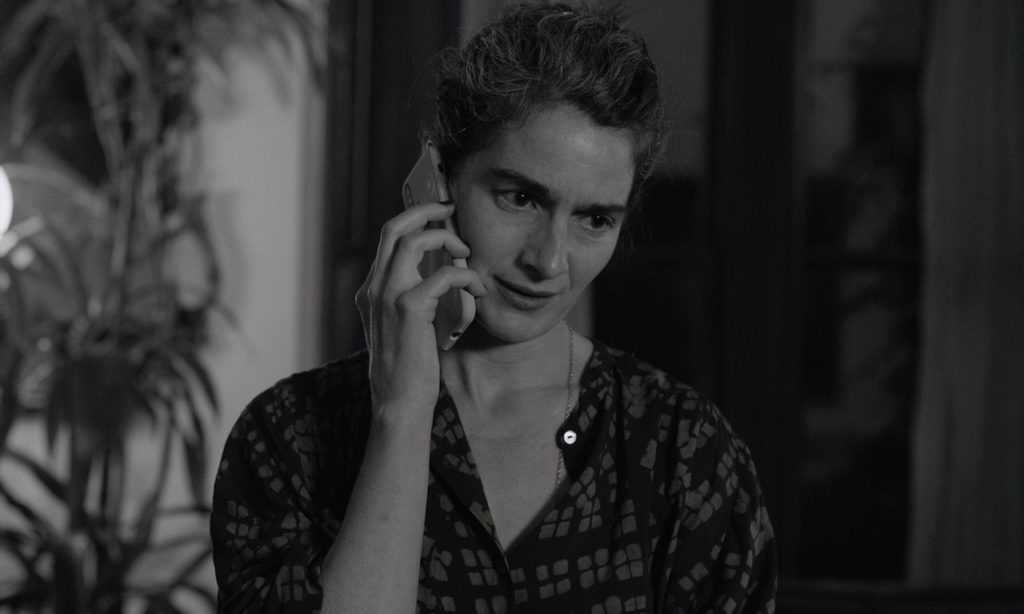 Gaby Hoffmann. Courtesy of A24

It’s fitting that Johnny’s radio show is implicitly designed as an NPR analogue, as C’Mon C’Mon often feels like a cinematic equivalent of such sonic-bath programs as This American Life or The Moth. Shot in gorgeous black & white and flooded with a lush soundscape by the National’s Aaron and Bryce Dessner, C’Mon C’Mon is a film which washes over you rather than propels you from plot point to plot point. Like a radio show, the story is largely portioned into episodes, with each location essentially functioning as its own discrete chapter, and while we never actually hear Johnny’s finished broadcasts, he serves as his own narrator by recording his own autobiographical monologues. The film is punctuated by Johnny’s interviews, which are apparently real interviews with actual children conducted by the cast (Johnny’s co-host, it should be noted, is played by real-life Radiolab personality Molly Webster). It even has the prerequisite tastefully-curated musical cues.** C’Mon C’Mon is masterfully rambling storytelling of the sort known in the radio biz as “driveway moments.”

This is the first time we’ve seen Phoenix on screen since 2019’s Joker, a role which can be seen as both a blessing and a curse for the actor. On the one hand, it earned him his first Oscar and will undoubtedly go down as his most widely remembered performance, but it also threatened to cheapen and commodify the method intensity which has made him one of the most compelling actors of the 21st century. C’Mon C’Mon feels like a conscious step back toward playing a normal human being, and it serves as a reminder of what makes Phoenix so great in the first place. Phoenix still imbues his character with an undeniably physicality and Brandoic mumble, but here he uses them in service of playing a genuinely kind, if wounded, man. Johnny’s life has been dotted with sadness, but, crucially, little of it plays as the sort of operatic melodrama that befalls movie characters. Instead, Johnny’s traumas fall within the experiences that have likely touched most of us at one point or another: a partner who left him, a mother gone of brain cancer, a strained– but still fundamentally loving– relationship with his sister. Phoenix is riveting, but manages to become so without the flashiness that’s become his stock in trade. Here, he’s just a guy you want to keep spending time with. 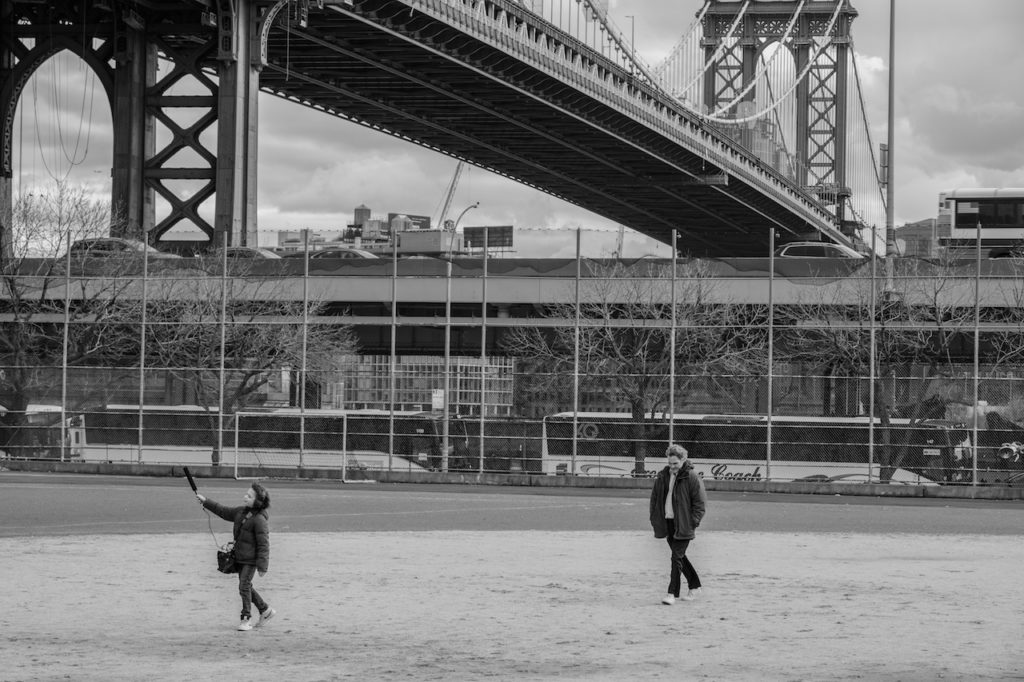 It’s also a testament to the rest of the cast that Phoenix is arguably the least memorable of the film’s leads. Hoffmann gets the least screen time of the three– sequestered in San Francisco, she remains a telephone presence for much of the film– but it’s remarkable how vividly she renders her character as a woman who deeply loves her family even as they each individually drive her crazy. Both Phoenix and Hoffman, however, cede the spotlight to Woody Norman, who delivers one of the realest child performances I’ve ever seen. It’s not that he’s unpolished, necessarily, in the sort of looking-in-the-camera-cute way one often sees from untrained child actors. Rather, Jesse feels like a real kid, with all the goofy humor and inexplicable weirdness that’s nearly impossible to capture in a professional film shoot. Jesse’s eccentricities in many ways feel like a match for Johnny’s (one of Johnny’s New York friends, played by Jaboukie Young-White, refers to him as “Johnny’s Mini-Me”), but he in no way feels like the overwritten miniature adults which often pass for “precocious” in Hollywood productions. In order to preserve a performance this natural, it must take a perfect storm of thoughtful writing, sensitive direction, and nurturing support from his co-stars (it feels significant to note that Phoenix and Hoffmann are both former child stars themselves), but it ultimately boils down to Norman, who might just be one of the most innately talented child actors of his generation.

All of this speaks to the magic of C’Mon C’Mon, which lies in its fundamental down-to-earthness. A conventional Hollywood film might flatten these characters into shorthand and archetypes: Johnny’s relationship with Viv would be more histrionic, Paul’s health problems would come to a more overtly tragic head, Jesse would utter from-the-mouths-of-babes platitudes straight out of a screenwriting textbook. Instead, these are people who you probably have in your own family, a little funny, a little sad, who love and hate each other in the same moment without contradiction. This is a film that will make you cry, not through histrionics, but by reminding you of the beauty and heartaches surrounding you already.

*  – Apart from the protagonists of Before Sunrise and Clerks, of course.

** – Including the Lou Reed-penned novelty single “Do the Ostrich,” improbably making its second soundtrack appearance of the year.