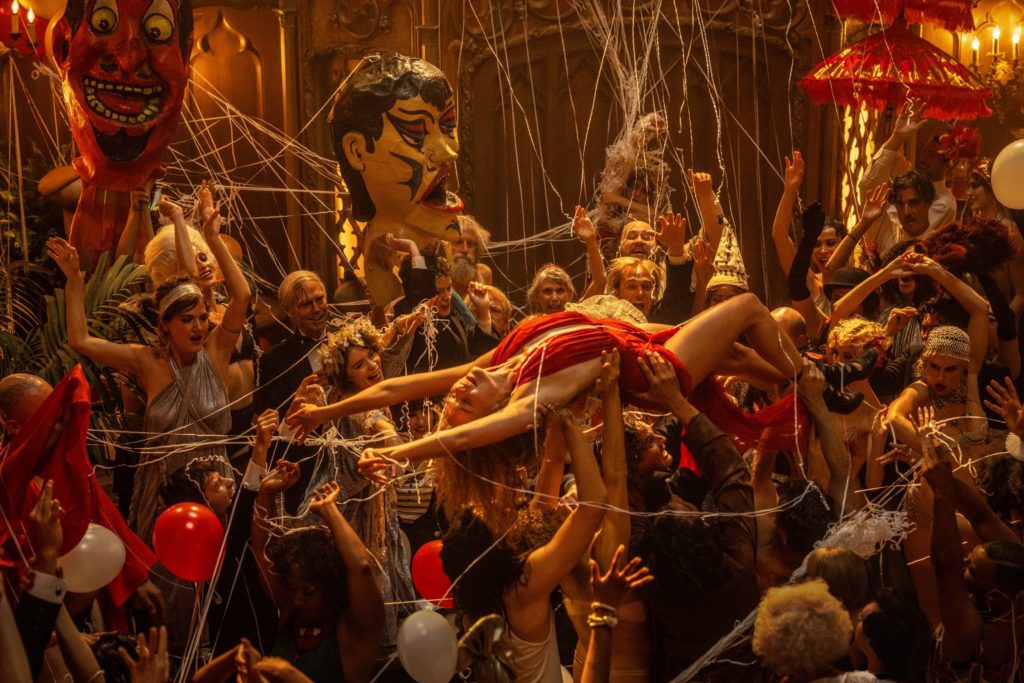 When I reviewed Baz Luhrmann’s Elvis earlier this year, I was faced with a conundrum: the biopic was so flamboyant, so excessive, and so tonally guileless that I found myself unsure whether to classify it as “good” or “bad.” In the case of Babylon, the latest paean to the City of Stars from La La Land director Damien Chazelle, I find myself in an even deeper critical hole, simultaneously cleaner cut and more paradoxical. I’m pretty sure Babylon is not a great movie; it’s overlong and wildly indulgent, filled with loose threads and store-bought cliches. And yet I must face the fact that I’m pretty sure I loved Babylon, and came within a hair of including it on my top ten list earlier this week.

Babylon focuses, as much as it does focus, on a trio of lost souls flitting around Hollywood at the tail end of the silent era: Nellie LaRoy (Margot Robbie), a dirt-poor Jersey girl who takes the cinema by storm as a sexpot comic maelstrom (Clara Bow, more or less); Jack Conrad (Brad Pitt), an ever-so-slightly long-in-the-tooth matinee idol who has comfortably ruled the silver screen for over a decade (Jack Gilbert, approximately); and Manny Torres (Diego Calva), a Mexican-American studio gofer who climbs the ladder to become a Thalbergian wunderkind producer. The Hollywood of the 1920s is portrayed as a bacchanalian free-for-all, with frenetic, outdoor shoots dovetailing into wild, all-night-and-then-some parties. But, of course, everything changed with the advent of sound: bulky recording equipment anchored the sets into stifling soundstages, and the new set of required skills upended the existing power structure in Tinseltown. Will any of our heroes survive the transition to talkies– spiritually, financially, or literally?

Taken at face value, I realize that the above might make Babylon sound like a movie you might take your grandmother to see on a Sunday afternoon at the Kendall. I, uh, wouldn’t recommend it. Put simply, Babylon is a lot. Within the first five minutes of this three-hour-plus movie, our hero is doused with elephant shit; there’s a golden shower within the first ten. From there, the movie proceeds at a breakneck pace, seemingly fueled by just as much cocaine as its party-addled characters, with enough wall-to-wall nudity and debauchery to make Ken Russell blush. Getting home (very late) from my evening screening, I found it almost impossible to fall asleep, my brain still pinging from Chazelle’s all-out sensory overload; the following morning I felt like I’d been run over by a Maps to the Stars tour bus. Babylon is essentially Singin’ in the Rain remade as The Wolf of Wall Street, and it is every bit as exhilarating and exhausting as that sounds. 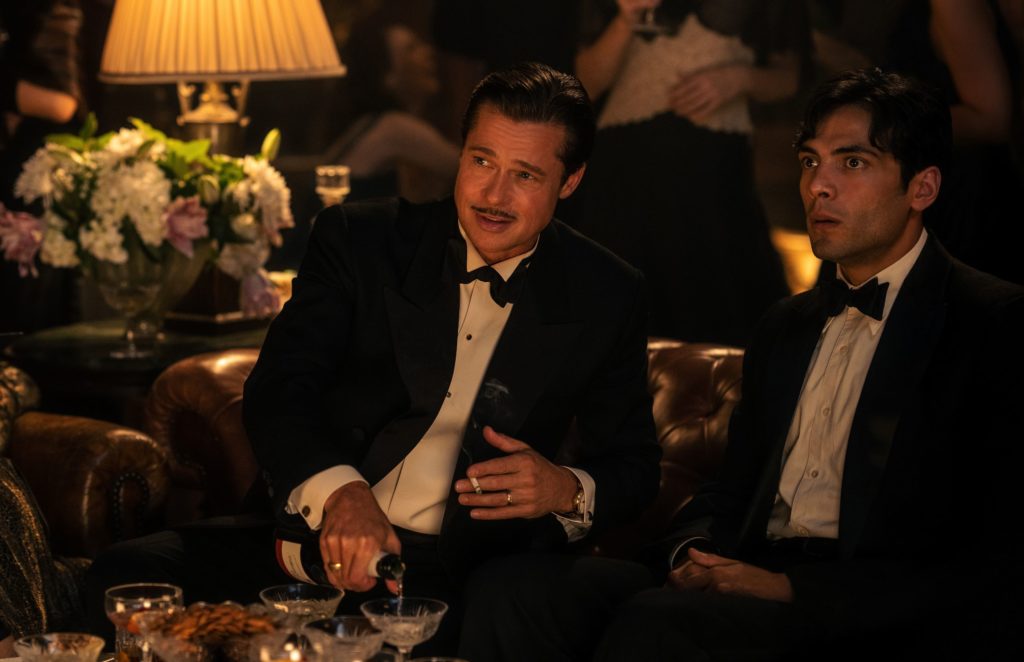 Babylon has thus far proven to be one of the most divisive films of the year so far, in the truest sense of the word; following my press screening, seemingly every critic in the room was either fully hyped for the movie or actively angry at it. And believe me, I get it. Babylon is every bit as loud and as garish as Elvis, without the sure-footedness of a veteran director like Luhrmann at the helm. Its rags-to-riches-and-back plot was the stuff of Hollywood cliche long before the era it portrays. It’s probably too sentimental for those looking for lurid thrills, and it’s definitely too vulgar for much of the TCM set who would appreciate its references. You’ll likely decide early on if you’re in or out, and if you’re out, you’re in for a long, grueling experience.

But if you’re in, Babylon is a fucking ride. Few contemporary Hollywood films propel themselves with this sort of manic energy, and fewer still are permitted to be this raunchy on such a hefty studio budget. You’ve seen most if not all of these plot beats before, but it’s rare to see them taken to such operatic extremes. There is, for example, the obligatory scene in which Nellie’s Harley-Quinn bray shorts out the mics during her first talkie scene (based, of course, on a probably apocryphal anecdote about Bow), but this is the first time I’ve seen the scene end with a supporting character literally dying. Likewise, the filming of a Biblical war epic helmed by a dictatorial filmmaker in the Von Stroheim vein (played by an uncredited Spike Jonze) seemingly claims the lives of at least a dozen extras. Nellie meets William Randolph Hearst and Marion Davies, and ends up projectile vomiting all over them. A late-film trip into Hollywood’s even-seedier underbelly (guided by an unexpected guest star whose identity I won’t spoil) descends into a truly perverse labyrinth of sideshow freaks and deviant sex, as if Tod Browning directed Eyes Wide Shut. Every year around Oscar season we inevitably receive a handful of love-letter-to-the-movies movies that often play like video wax museums; this is a rare one that feels truly alive.

Indeed, the excess of Babylon is so rare in contemporary depictions of Classic Hollywood that many viewers reacted to early trailers with incredulity – “Since when did actors in the 1920s do coke and go to orgies?!” The answer, of course, is since the 1920s. Early Hollywood was a hotbed of scandal, both real and cooked up by the conservative media in the opening salvos of a culture war that is still raging today. This image problem led to the creation of the Hays Code, the draconian board of self-censorship which set into stone the prim-and-proper image of early 20th century America which persists to this day. Babylon, meanwhile, takes clear inspiration from Hollywood Babylon, the trash-paperback classic in which underground filmmaker Kenneth Anger compiled the tawdriest gossip of the silent era. The stories in Anger’s book are often wildly exaggerated by generations of retelling through the grapevine, if they were even true in the first place*, but it remains a totemic text by presenting a radically different narrative from the one pushed by the Hollywood establishment. Babylon harnesses that power, blasting onto the screen with all the force of a train entering a railroad station. 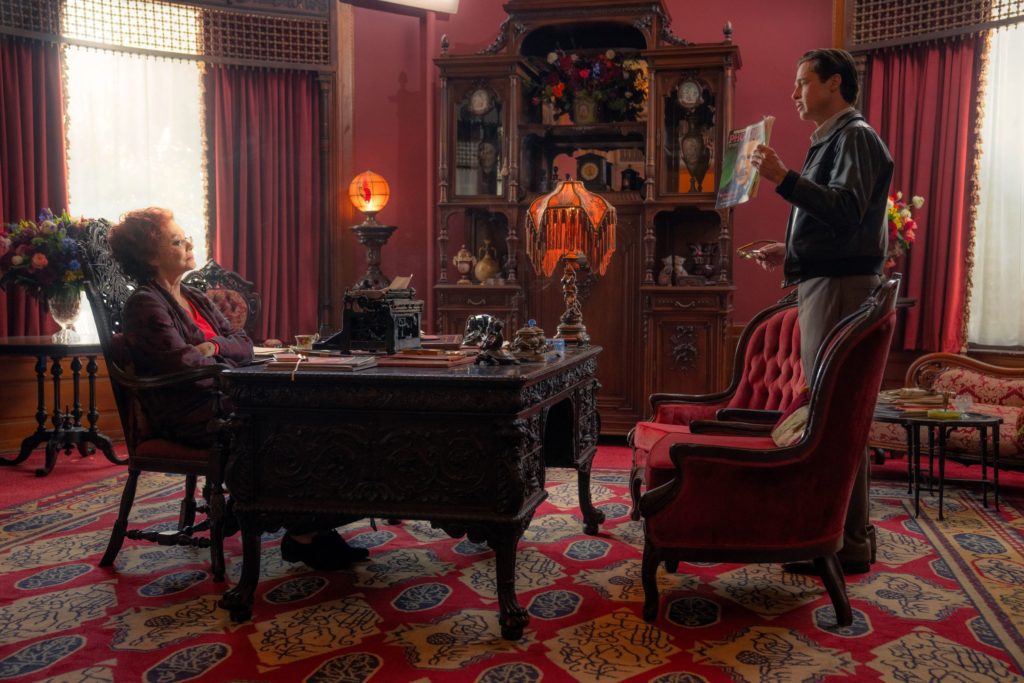 Is Babylon a great movie in the capital-G sense of the word? Good heavens, no. Like most three-hour-plus films not made by pantheon directors (sorry, Damien), there’s a lot of fat which could easily be cut. A few side characters, notably a Chinese-American actress/title-writer/chanteuse played by Li Jun Li and a Black jazz musician played by Jovan Adepo, feel like they’ve been given the short shrift, their storylines awkwardly ending well over an hour before the film’s end. And it’s never quite clear how many of the film’s anachronisms are intentional and how many are the result of sloppy research; Robbie’s crimped hair, for example, makes her look more like a Whitesnake video vixen than a Mack Sennett bathing beauty. Babylon will be of interest to students of classic film, but it will never be an essential text.

But, as a critic, my job is to relay my own experience with a film, and the fact of the matter is that I had a fucking blast with Babylon. It’s exactly the sort of swing-for-the-fences Hollywood filmmaking that we see less and less of these days, and sometimes you just need a big, sloppy, pizza of a movie to keep you happy. And it may serve an actual purpose, to boot: in an increasingly myopic and algorithmically blinkered culture, anything that might get younger people interested in an earlier era of cinema can only be a good thing. Is it historically accurate? Probably not, but somewhere, Kenneth Anger is probably smiling.

* – For more on this subject, I recommend Karina Longworth’s excellent “Fact-Checking Hollywood Babylon” series of her essential podcast You Must Remember This.