Before we proceed, I want to be up front to anyone reading this review to find out whether Elvis is good or bad: as I begin writing, I haven’t the foggiest.

Elvis, of course, refers to Elvis Presley, the late, much-mythologized King of Rock and Roll– but that title doesn’t quite do the film justice. Though it does indeed tell the singer’s entire life story from hard-scrabble childhood to Fat-Elvis decline, this is far from the by-the-book biopic implied by its mononymous title. To my eyes, this film should be properly referred to as Baz Luhrmann’s Elvis, reflecting the constantly visible hand of its creator, the Australian fabulist behind such mash-up musicals as Moulin Rouge! and 2013’s The Great Gatsby. Though Elvis is at center stage, this is Luhrmann’s show, a bombastic symphony of music video bravado and willful pop-art anachronism. The result is simultaneously exhilarating and exhausting, reverent and perversely flip. It contains one of the better music biopic performances in recent memory, and one of the very worst perhaps ever. It’s the damnedest thing I’ve seen in a theater in years, and I truly don’t know whether or not I mean that as a compliment.

Elvis opens on an ambulance speeding through the streets of Las Vegas– not to the home of the troubled singer, but to that of Colonel Tom Parker (an only vaguely recognizable Tom Hanks), the mysterious European ex-carny svengali who served as Presley’s manager, financial advisor, and wrangler for much of his career. Shuffling out of his hospital room and wandering through an empty casino, Parker regales us, the Elvis-loving public, with the tale of his famous charge’s rise and fall, from his dirt-poor Memphis upbringing to his reign as the hip-shaking godhead of America’s youth to his lengthy, fitfully rewarding residency at Vegas’ glitzy International Hotel. Through it all, we come to know the real Elvis (Austin Butler), a mush-mouthed kid who loved Black music and just wanted to buy a pink Cadillac for his momma, but who was blessed/cursed with the voice, face, and pelvis of a god. Elvis was barely out of his teens by the time he stopped being a human being, instead becoming a walking manifestation of the generation gap and a resource for unscrupulous business interests to exploit– despite Parker’s cooing, sneering narration constantly telling you otherwise.

One major function of the music biopic is to renew the mythological status of its subject, to reanimate and recontextualize them for a new generation; consider the X-ers who hung Jim Morrison posters in their dorms after seeing The Doors, or the Millennials who ripped At Folsom Prison onto their iPods after getting home from Walk the Line. With Elvis, Luhrmann seems to be updating the King’s story for today’s youth– Boomer mythos for Zoomer times. In keeping with today’s most popular mode of storytelling, Presley’s youth is told as a superhero origin story, and the results are more authentically comic-booky than anything coming out of the Marvel or DC assembly lines. Elvis’ inspirations are portrayed by contemporary pop stars (including Gary Clark, Jr. as Arthur “Big Boy” Crudup and Yola as Sister Rosetta Tharpe), and breathless headlines are subtly tweaked into today’s parlance (no, Steve Allen did not threaten to “cancel” Elvis in 1956). Elvis’ admiration for Black artists and culture is emphasized, perhaps to offset the (not entirely unjustified) perception that he built his career on cultural appropriation. The core of the story is the same, but it’s been resculpted to the times, like a new translation of Beowulf.

The premise of Elvis– or rather, of hiring Luhrmann to direct Elvis– seems to be that Elvis was as much a force of nature as a man or musician. Luhrmann, with his maximalist, everything-and-the-kitchen-sink approach, attempts to drive the viewers into the glossolalic euphoria that beset Elvis-crazed teens in the ‘50s– and, to that end, he succeeds. This is one of the most frankly experimental Hollywood blockbusters ever made; so much of the film consists of montage and pastiche that it’s practically non-narrative for long stretches (though, like the man himself, it slows down a bit once it reaches Vegas). The film at times plays like a two-hour trailer for itself– and, like a trailer, it leaves you both thrilled and shell-shocked.

Almost fighting his way through the cinematic frippery is Butler, who is quite good as the snake-hipped King. Butler is, of course, neither the first or last screen Elvis by a longshot; Elvis Impersonation is by now its own distinctly American artform, as codified as Kabuki. But Butler brings a clear-eyed innocence to a man who has long since been calcified somewhere between cartoon character and martyred saint, and makes you root for him to prevail against his sad, telegraphed fate. Butler’s Elvis is a good man who loves his family and is affected deeply by the Civil Rights movement, but he’s anguished by the fact that he knows he’s just too dumb to steer his own career. Butler brings pathos to Elvis even when he’s at his most outwardly laughable, and electrifies the screen when reenacting his career highs. It’s a nuanced performance, and very possibly a star-making one. 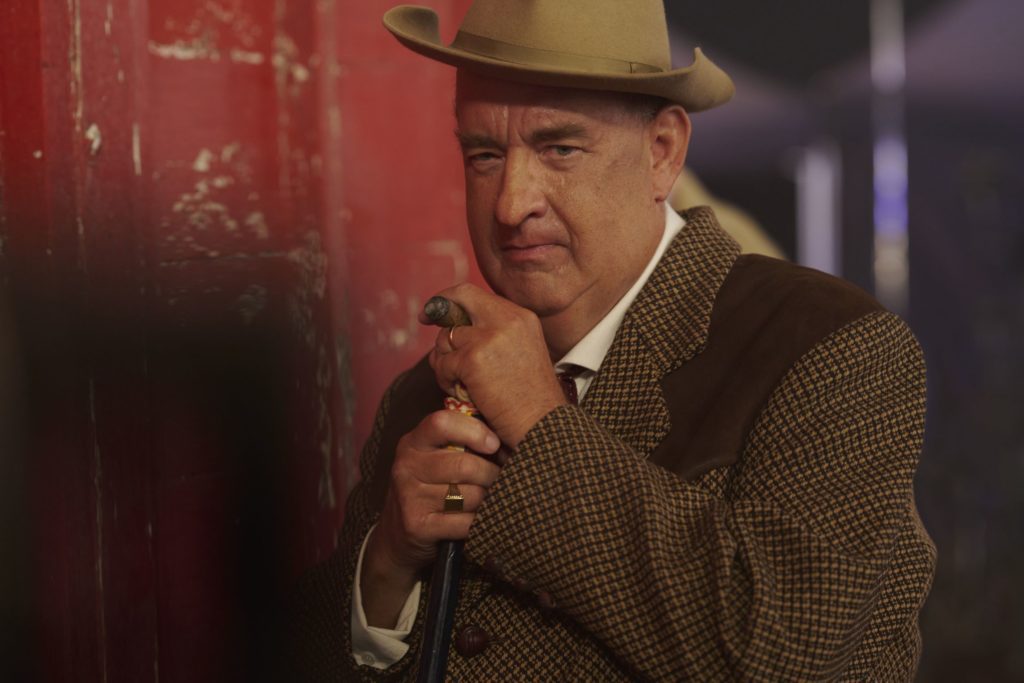 Which makes it all the more baffling that Butler’s performance is tethered to Hanks’, by far the most bizarre of the beloved actor’s career. Slathered in a Penguin-esque fat suit and putty nose and whispering his lines in a peculiar Teutonic croak, Hanks resembles nothing more than Mike Myers as Goldmember. He creeps in and out of scenes like a sweaty, music-biz Max Schreck. A startling amount of screen time is devoted to Parker waddling around backstage at the ‘68 Comeback Special repeating the phrase “Santa Claus Is Coming to Town!” His narration is off-putting and distancing, recalling at times Malcolm McLaren’s self-aggrandizing patter in the Sex Pistols quasi-doc The Great Rock ‘n’ Roll Swindle,* popping up in the middle of dramatic scenes to say things like “I did not keel Elvis! YOU keeled him! He vass keeled by your luff!” As a characterization, Hanks’ performance is deeply weird, and as a framing device it simply falls flat. If, by the end of this review, my thumb is pointing downwards, it will probably be the reason why.

This emphasis on Parker also raises some questions about the project which I’m not sure Luhrmann intended. Parker continued to manage the Elvis estate for the two decades between Presley’s death and his own, but held no rights to his actual musical catalog (due to one of many poor business decisions, that was owned entirely by RCA). To compensate, Parker beefed up Elvis as a brand for nostalgic kitsch merchandise, and as much as Elvis tries to humanize its subject, it can’t help but feel like an extension of that brand. Elvis does its best to reconcile Elvis the Man with Elvis the Musician, but it can’t quite escape the shadow of Elvis the Registered Trademark– Elvis the Tourist Attraction, Elvis the Swivel-Hip Wall Clock, Elvis the Two-Show-An-Afternoon Revue at the Casino Buffet. Luhrmann works his trademark mash-up magic on Elvis’ music, which is rarely heard unadulterated; we hear it covered and remixed, sampled and rapped-over, slowed down to trailer-speed and bolstered with strings, but only occasionally in the form in which it changed the world. This, again, is likely aimed at translating his appeal to younger viewers, and for the most part it works cinematically, but I worry about the long-term effects of treating art as malleable and porous in this age of context-free, algorithmic streaming– particularly in a major motion picture with a definitive-sounding title like Elvis. There’s no George Lucas figure locking the real Elvis’ music away in a vault, but when so many people receive their art and culture through increasingly narrow, corporate-controlled channels, does that even matter?

So is Elvis any good? My brain says no; it’s tacky, it’s overlong, it’s glibly ahistorical, and some of its choices are head-scratchers at best. But man, it’s a hell of a thing, and try as I may I can’t quite shake it nearly 48 hours later. Studio pictures this formally and aesthetically out-there are rare– think the Wachowskis’ Speed Racer or, less charitably, Cats– and, for its many faults, I wouldn’t dream of dissuading someone from gawking at this thing on a gigantic screen. And underneath it all, there is a dark truth I can barely bring myself to acknowledge: the damn movie works, on a base, primal level not unlike Elvis’ records themselves. Not every movie has to be structurally sound or intellectually defensible; sometimes it’s enough to be pinged from one candy-colored sensory assault to the next.

Elvis is probably not a good movie. I’m probably going to see it again very soon.

* – This similarity may not be wholly unintentional; Craig Pearce, who co-wrote this and several of Luhrmann’s other films, also penned this year’s Pistol miniseries for FX.