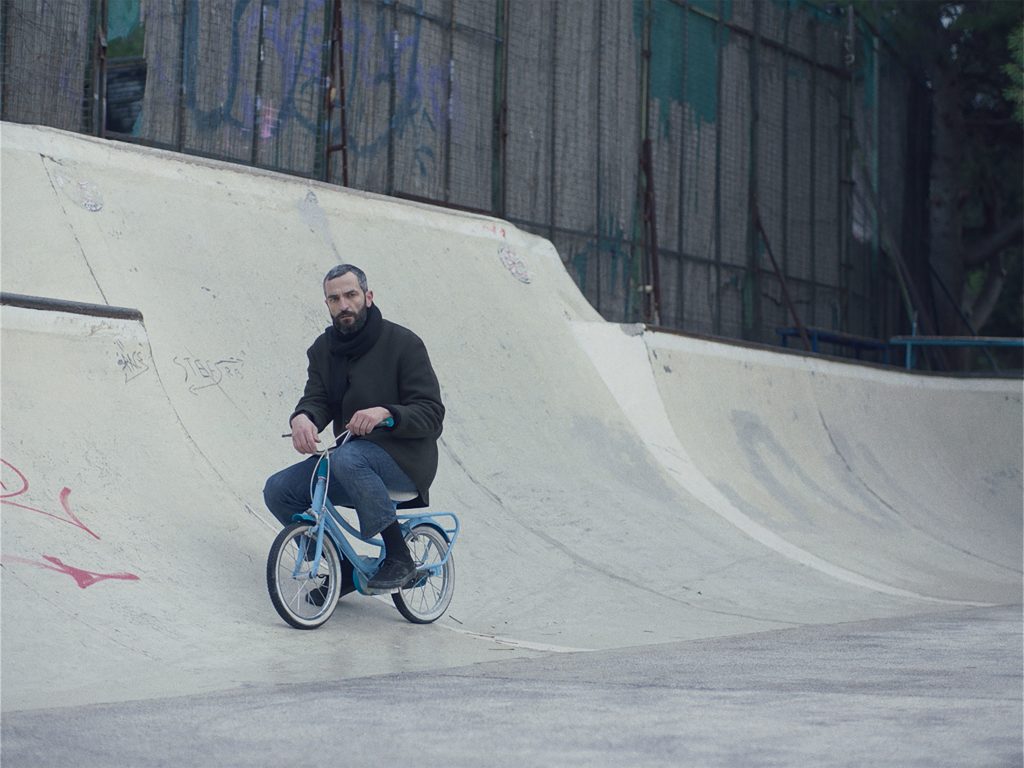 Disciples of the Greek Weird Wave may have instilled a set level of concern for on-screen characters in peculiar situations. In preparing for Yorgos Lanthimos’ new film Poor Things, I plan on performing a psychological factory reset so that moral normalcy doesn’t feel as jilted. Director Christos Nikou, who had worked with Lanthimos on The Lobster, sets sail to the weird island of Apples, where amnesia is a contagion. Those who show signs of forgetfulness or memory loss are taken to the Disturbed Memory Department. There, a team of white coats tries to help establish new identities for the “unclaimed,” or people who don’t have a family or friend system to confirm who they were before.

We are introduced to this new world order through Aris (Aris Servetalis), who is sent to the Department when he can’t answer the bus driver on where he was heading. After failing memory assessments and association games, Aris begins a recovery treatment created by the Department. He is placed in a nondescript apartment and is prescribed tasks— ride a bike, watch a movie, go to a strip club — with instructions to take a photo once they are accomplished. Aris navigates his therapy with a quiet diligence, allowing the motion of routine and “experiences” to forge some purposeful memories. As his tasks attempt to rebuild a foundation, the question of identity becomes more emboldened. Who is he when he does these things, and who would he have been if he wasn’t at the program?

Even if it’s a by-the-books classification, science fiction isn’t an apt genre to describe the specific flavor these movies hold. Philosophy fiction might raise some eyebrows, but in watching this, questions that you come up with will spit back at you. There is a timeless texture that stretches this sort of viral-based dystopia across past, present, and future: the Polaroid cameras, interior lighting as warm as candles, and the absence of technology. Still, the concept of social media’s impact shows up without the need to mention Instagram. How much value does photographic evidence hold for an experience that seems more business than pleasure?

While more easily digestible than The Lobster, some of the familiar humor further carries this film to the era of strange days (as the COVID saying goes: “It’s a weird time”). In one instance, Aris is driving with Anna (Sofia Georgovasili), another person from the program, to perform a task. She describes the time she cried to a movie where a woman, trapped in a marriage proposal with a rich man, falls in love with another man before natural disaster strikes. Unable to recognize Titanic, Aris’s awkward “Tragedy story” is almost too solemn to be a punchline.

With the reluctant exception of Anna, Aris doesn’t attempt to connect with others. As he comes across others who are carrying the same instant camera and doing the same things that he had once done or in the midst of doing, he silently observes the action before walking by. Though it might seem like the program de-individualizes identity and seems brainwash-y, remember that the CDC was once throwing malaria treatment at COVID infections. Good intentions may abound, but in this land of cinematic communication where characters act behind not-so-clear rationale, Apples is a type of brain food that luckily doesn’t sour at the end. As Aris starts to make decisions for himself and reveals some reflexive interests (such as the compelling nature to twist and jive to a familiar song), there is a sense of relief — or perhaps despair in others — that the core of the human being does not easily bend.