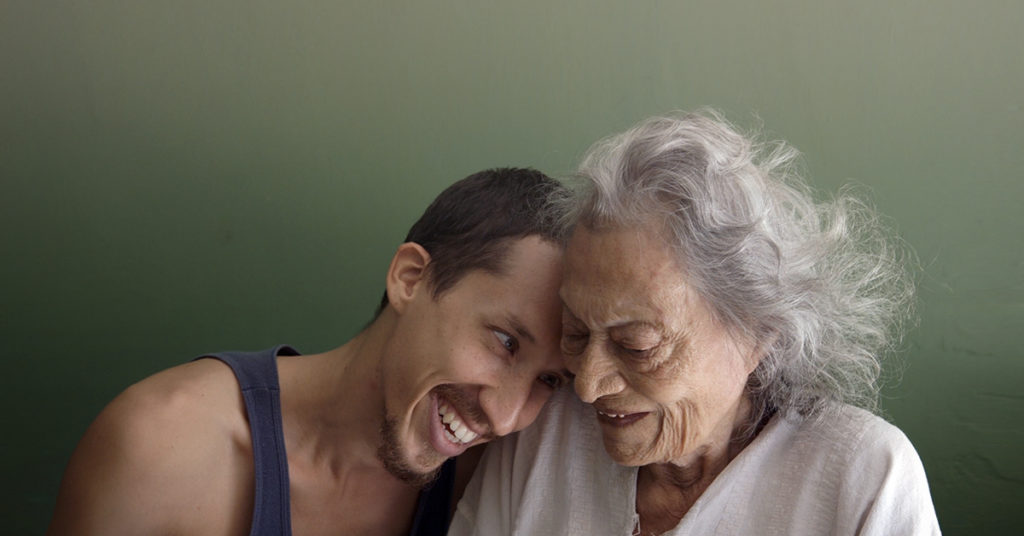 Diego and his grandmother, América

When directors/cinematographers Erick Stoll and Chase Whiteside met Diego Serrano, a street performer in Puerto Vallarta, their original plans of creating a piece about Mexican beach tourism began to morph. Following his 93-year-old grandmother’s fall, Diego returns to Colima with his brothers Rodrigo and Bruno to take care of her while attempting to extricate his father, who was incarcerated for alleged elderly negligence. Not knowing exactly where or how it’ll end, Stoll and Whiteside followed Diego to his hometown. A faint lightbulb of an idea miraculously culminated in América, a three-year project that carries the tenderness of a homemade video tape of Polaroid-instant nostalgia, all within the same balancing hands that hold an unbiased camera.

Stories about aging are commonly multifaceted, turned over and dipped in generational reflections and family responsibilities. Add in cultural variation, and viewers have to do more than recognize themselves in the scenarios. In Lulu Wang’s The Farewell, Billi represented a Westernized perspective that voiced the well-intended audience member’s thoughts: wouldn’t it be much easier if they tell the grandmother she’s sick? Later on, it becomes apparent that right-vs-wrong isn’t stemmed solely as an individualized conflict. Even if it doesn’t make sense, there’s no necessary motion to rationalize and pull apart a community belief to comfort our understanding or even more importantly, appreciate the ingenuity of an organic piece. Sometimes, it just is.

Even though the movie is named after the grandmother, we can’t help but perceive the transnational differentials in geriatric care and obligations beyond a singular being. There are small sacrifices and uncomfortable confrontations that are either strengthened or worsened by the lack of context between the shifts in time. In the same breath (and this seeming campaign of visiting your grandmothers at this immediate moment), América‘s family affair is a quiet energy that doesn’t escape beyond the intimacy of the Serranos.

But whether you choose to think about it hard or not, América is so much more endearing than it sounds. The Serrano sons are characteristically competitive and caring in the way that siblings are (and if you don’t think there’s enough room in this movie for a brotherly ass-whooping, you’ll be glad to know that you’re mistaken), but the biggest piece of heart is from América herself. In a memorable take, Diego and América both break the fourth wall when he mentions that they’re being recorded, and América’s affectionate laugh when she’s called a “startled star” is, honestly, too much for words. Her vulnerability and reactive laughter is the center of warmth for the camera lens as well as for the brothers who, without a doubt, have been raised by someone who has loved largely throughout her life.

The directors’ previous collaborative works consist of political-minded short videos (three years ago, Stoll had presented Good White People at DocYard), so it seems to make sense that each scene feels deliberately stated and perfectly placed for the next plot/character progression. And while América presents as a simple story, the offhand laughs and the family ties remind us that all of this is very true. The complexity then kneads in itself when we realize that there are a lot more questions underneath the surface (What does América remember? How often have the brothers seen each other prior to the fall?) that the documentary intentionally leaves behind. What for? An ending that, at the very least, feels rewarded, even if the prospect of moving on looks painful.

Screening at the Brattle Theatre on Monday, February 10 @7pm
Presented by The Docyard
Directors Erick Stoll and Chase Whiteside will attend a post-screening Q&A with the DocYard’s Guest Curator, Abby Sun!