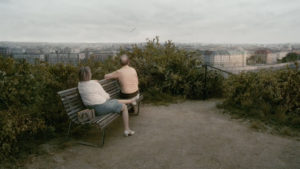 How to classify the films of Swedish septuagenarian Roy Andersson? Are they depressants or palliatives, aphrodisiacs or abortifacients? Among their strikingly varied, erratic, and difficult to predict side effects have been reported giddiness, stoicism, euphoria, suicidal ideation; some subjects have even complained of boredom.

Given the degree of volatility involved, perhaps a pause on the distribution of these films should be considered. Can small cinema be allowed to escape the rigorous scrutiny to which we regularly subject big pharma?

In any event, here comes another Andersson production. It’s called About Endlessness, but it’s not very long. Marginally more miserable than the films that precede it, it’s almost as fantastic, and while it borrows a few elements from the likes of Bergman, Python, Kaurismäki, and Benny Hill, it’s unlikely to be mistaken for anything but an Andersson.

A canonical kick in the gut delivered in an earlier Andersson bemusement park may help set the mood. It occurs near the end of Songs from the Second Floor (2000), the inaugural installment in the so-called “Living” trilogy of singular sketch-tragedies to which this new one, About Endlessness, serves as a kind of coda:

It takes a minute for the scene’s brutal conceit to congeal and connect, as a heap of rubbish in a bleak, otherwise flat landscape rises steadily higher under the castoff, unsellable merch tossed upon it by a bitterly disillusioned crucifix-salesman, one dead Christ at a time, over and over and over. Between heaves, the man curses himself as a failure and the world as a racket; resurrection, if and when it comes, assumes the form of a column of smoke.

There we are, then. And here we are, too, twenty years and three films later, and Andersson’s still telling us about such men (and the occasional woman or child): broken buffoons, and God bless them. A novelty: in About Endlessness, a woman’s voiceover delivers suggestive descriptions–captions, really–for most (not all) of the characters and situations we meet, a la “I saw a man who had lost his way,” or “I saw a man with his mind elsewhere.” We’re on a pilgrimage in a familiar world, remade by a master estranger. 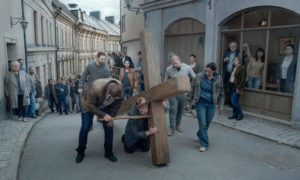 What predominates among Andersson’s conflicting attitudes towards characters like these? Pathetic, pitiable, suffering from real albeit often ridiculous and/or self-inflicted plights, they are withal grotesques of selfishness, their sympathetic qualities regularly undermined by eruptions of pettiness at best, and irrepressible awfulness at worst.

One emblematically jaw-dropping scene centers on a bedridden, demented old Swedish general who, while surrounded by soldiers and sycophants celebrating his 100th birthday, suddenly interrupts the official proceedings to give the Hitler salute and bark out his “regards to Goering.” After a few beats of awkward silence, the little party goes on as before, the outburst unremarked upon, unredeemed.

Perhaps something similar can be said about both endlessness and About Endlessness? Eternity makes a mockery of history, Andersson seems to be saying. Of cinema, too. Individual lives can hardly be seen against it at all. In a memorably awkward blip of a scene, set in the collapsing Führerbunker during the last days of the war (start looking for them and less obvious nods to Nazism start turning up all over the “trilogy”), Andersson casts the net of human sympathy–or of withering pity, at least–to breaking point when he depicts Hitler as just another sad little slob like us. “I saw a man who wanted to conquer the world and realized he would fail,” intones the voiceover as the devil shivers and sobs. 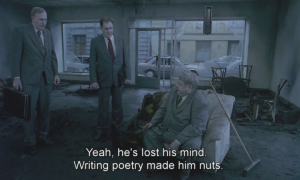 Samuel Beckett famously observed–perhaps not literally, but who knows, I wasn’t there–that we give birth astride of a grave. For Andersson, this image, while promising, is too neat, its circuit too short. Birth and death, along with the whole smörgåsbord of living in between, are always taking place and trading places in his films. You might as well say that we give death–whether our own or anyone else’s–astride of a garden, which doubles as a graveyard. Like any other garden, it grows corpses. Skål!

The notion is grim, even ghoulish, but it’s also playful, and a bit dizzying—something to laugh and bond over with a grue-friendly companion. One of About Endlessness’ winningest scenes shares a similar spirit. A pair of students sit on opposite beds in a small room, hitting the books beside a window full of stars. One reads the other a passage describing the first law of thermodynamics: energy can be neither created nor destroyed, but only transformed, maaan.

This spurs the two to metaphysical speculations of a weedbrained kind: in the future, mightn’t we (or our energy) become, oh, I don’t know, potatoes, perhaps? or tomatoes? Which will we prefer, and will we get to be them together? Looks silly now that I’ve written it, but on screen it’s as good as a rest, I promise.

Perhaps these same students, should they retain their human forms, will one day find themselves floating over ruined cities in a tremulous embrace, like the Chagall-by-way-of-Gilliam couple that pops up with apparent randomness (nobody said energy was purposive) as Endlessness doesn’t end. Whether these choir-garlanded interludes–these airy graces?–are intended to slake or mock our thirst for immortal transcendence is, of course, in the eye of the beholder. I lean toward the latter reading, with the proviso that this is mockery at its least cruel and most humane.

Compositionally, Andersson is a painter, and not an action painter, either: he picks a perspective, often a loooong one, positions his characters within it just so, then records them doing very little, rather briefly, before moving on to the next tableau. His preferred backdrops tend to be variations on themes: bars and restaurants, boardrooms, transportation hubs, apartment interiors (generally bedrooms and kitchens), park benches, traffic jams. As scene after scene rings minor changes on themes of frustration, humiliation, aggravation, emasculation, disenchantment, and so on, Andersson somehow imbues his procession of petty grudges with a wistful, funny quality that just about compensates for the absence of a blanket redemption. 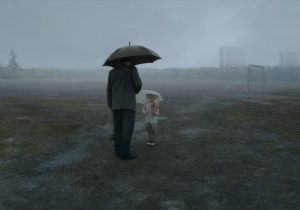 This isn’t the kind of “slow cinema” that some art-house audiences have trained themselves to conflate with seriousness and profundity of vision; for one thing, the vignettes don’t last long enough for that. For the same reason, and a few others besides, the resemblance noted by many between Andersson’s wry taciturnity and that of Finnish auteur Aki Kaurismäki doesn’t run particularly deep either. While both create highly mannered, quirky films rife with Scandinavian reticence, only the Finn tells sustained stories; the Swede is up to something else. He demands a little less patience from his audience, and a higher tolerance for shtick.

About Endlessness revisits many of Andersson’s favorite old haunts, and even a few specific sketches from films gone by. Once again we meet a man who reports having run into a former friend he’d somehow wronged many years before–only to be tormented when the man snubs him. Might he have been a figment? A phantom? Maybe so, but would either be a consolation?

The question of consolation–whether it exists at all, and what it might consist of–consumes other recurring characters here as well. A man on an unmoving bus gets on his fellow passengers’ nerves with his bawling complaint: “I don’t know what I want!” A pastor slides into alcoholic despair after consulting a therapist about his loss of faith. What is left for me, or for humanity, he asks, if there is no God? Jojo, yawns the therapist, there is the contentment you can find in life, of course! Oh, right, of course, that contentment. Thanks, doc. Got any booze?

Bathos is Andersson’s home key. He directs our gaze deep into the unbridgeable gap between the sublime above and/or beyond us and the querulous quotidiana in which we’re mired down here in the underworld. “Everything is fantastic!” one little man insists to his unimpressed fellow drinkers as a dazzle of silver snow falls outside a corner café-bar’s windows. “At least I think so,” he repeats several times, to no response, shrinking a little further into silence with each echo. Whether pigeons on branches or people on benches, Andersson’s Earth-stuck seekers look up and out in dumb wonder, then down and in in self-sick sourness. 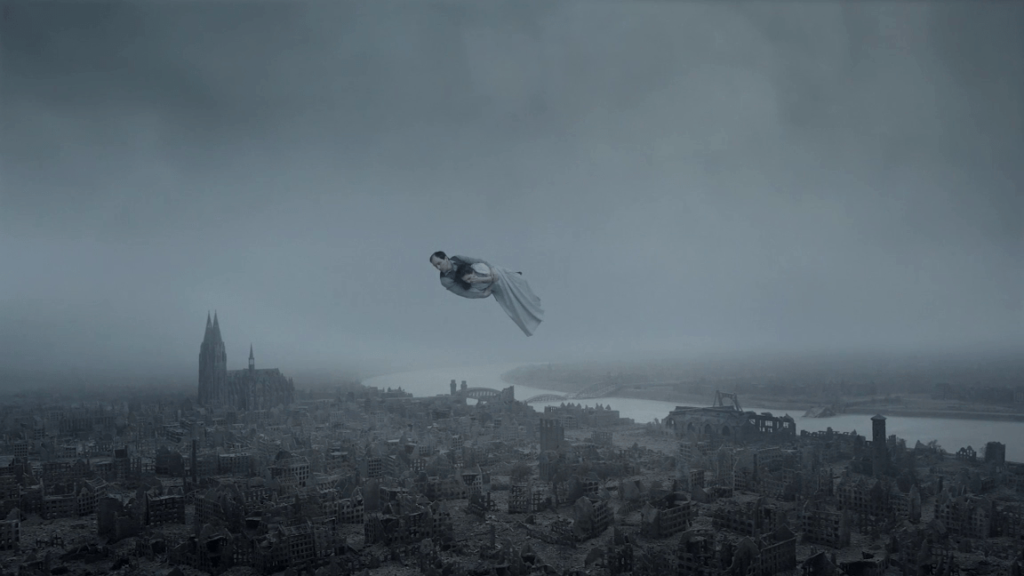 So what, if anything, is there in this weirdly, gently brutal mopescape for you, the living viewer? A good time? Well, sure, why not? About Endlessness packs fewer grace notes than A Pigeon Sat on a Branch Reflecting on Existence (2014), and lacks its valedictory charm. Probably because it represented a conclusion (a false one, it turns out), that film had a palpable air of shaking things off with a good natured shrug. This one, which represents no conclusions, wears itself more heavily; it’s less funny, even more taciturn, and, despite its brevity (fewer than 80 minutes of forever), could easily drop a few segments without losing much. (The ostensibly uplifting dance of the young women scene, for instance, failed to launch for this cranky malcontent.)

But still. And yet. Jojo.

Might Andersson’s sequence of 21st century films, sui generis in so many respects, amount in the end to little more than the spectacle of a sad Swede crying in, and sometimes laughing at, the whole world’s beer? Sure, could be, if you persist in believing in endings. But if you’ve been a fan up till now, I feel 100% confident (which is my limit) that you’ll gladly revisit the magically disenchanted, discomfitingly uncanny realm of the Living trilogy every last chance you get. As for newcomers, transformers, and other future tomatoes: you could do worse than to throw yourself at the screen. Side effects may vary.