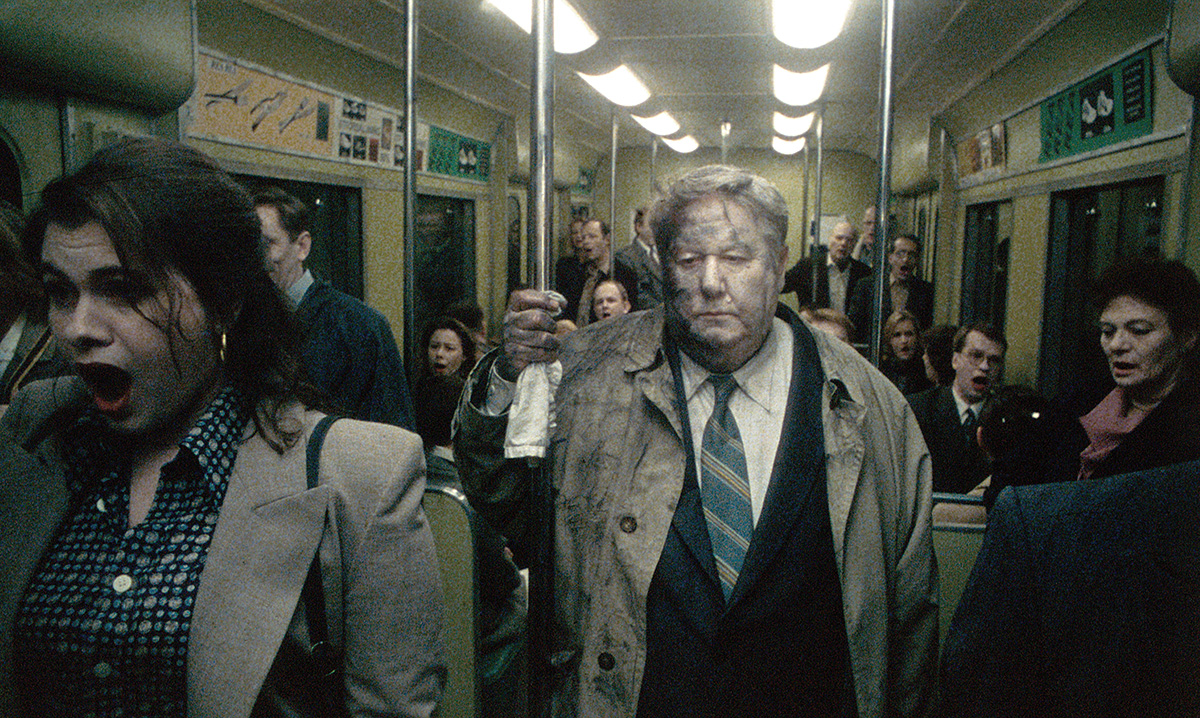 “Blessed be the one who sits down!”

Masses of humanity tow towers of luggage at a snail’s pace across a vast airport lobby, ever yet somehow never closer to an array of attendants forever waiting to check them in. A plump and prosperous family gathers around a nursing-home crib to celebrate the 100th birthday of their patriarch, only to retreat in embarrassment when the frail relic waxes dreamily nostalgic about Adolf Hitler. A smoke- and ash-smeared, middle-aged businessman, wandering around town tearily informing everyone who will listen that his furniture store has burned to the ground, precipitates an operatic outbreak of song on a hitherto silent, commuter-choked subway train.

Songs from the Second Floor (2000) is the first installment in Roy Andersson’s so-called “Living” trilogy, with which the Swedish director recommenced his feature filmmaking career after a 25-year hiatus spent producing (according to Ingmar Bergman) the most beautiful TV ads in the world. It’s hard to imagine a sharper rebuke to the commercial sector he long served than the collection of lavishly weird, mordantly zany vignettes that compose these angry, daffy, dryly deranged films. (Begging your pardon for the adjectival overkill.)

Often described as surreal or inscrutable, Andersson’s bathetic images of corporate and domestic life are actually, more often than not, all-too-scrutable. For all their wince-inducing hilarity, their absurdism has more in common with the pointedly polemical satire of Ionescu than they do with the randomness of Dada, say, or with Michel Gondry’s tireless (tiresome?) whimsy. Here and often there you’ll also find the gloomy but essentially benevolent humanism of Aki Kaurismaki. Blankly frank humor, in other words, in the rich Scandinavian tradition.