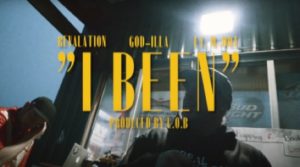 There aren’t many acts keeping old school hip-hop alive quite like Boston collective EMS (Experimental Mind State). Their catalog speaks for itself, historically crafting production influenced by a nostalgic, gritty boom bap style, a seemingly lost art in hip-hop. EMS has achieved the complex balance of sticking to their sonic roots while maintaining relevance, which is arguably the most impressive trait about the group. EMS member and New Bedford, MA native, Revalation, continues their illustrious longevity releasing their new album, RevILLutionAries, with frequent collaborator GoD iLLa. While the full project certainly deserves its flowers, third single “I Been” and its accompanying visuals with legendary Boston emcee M-Dot, is the epitome of why EMS has proved to be a hip-hop powerhouse.

Following the success of their previous two singles “Wu Wednesday” and “Dreamchaser”, Rev and GoD iLLa raise the level of creativity with “I Been.” Lead producer L.O.B. and engineer Sensus construct an intimidating instrumental. The stark piano chords layered with low-pitched vocal samples produce a menacing aesthetic, but it’s the thunderous drums that really hold the track together. All three emcees deliver their rhymes with conviction and bravado, as each cohesively conveys themes of being underestimated, while staking their claim as a longtime unstoppable force. Rev’s hook is braggadocious and whimsical, as he flows, “I been a roll lately, chasing this dream / but I got ends to meet, you know what that means / so don’t get in my way tryna stop my green / because I been on a roll lately, I been on a roll lately.” His delivery is raw and aggressive, but also surprisingly relatable.

M-Dot starts his verse off with a vengeance, ferociously rhyming metaphors that depict the vitality and deep influence he’s demonstrated in the rap game. Dot’s recognizable voice commands respect as he lets his pen game do the talking, claiming that he’s been dope since “well before the pilgrims ever held hands with Taunto / before the Mayflower took the ocean”, while adding he “was prophesied, scribed in the books of the Omen”.

The clever historical references throughout his verse add a deeper meaning to his overall message of self-awareness. GoD iLLa follows M-Dot on the second verse, providing a smoother, more laid-back flow, but it is no less witty than his predecessor: “a fixation for domination / I been spittin’ crack since the Reagan administration / you’ll never find someone as fresh / I been lit since it was ill, but ill since it was def”. In addition to the hook, Rev comes through with the final verse, ending the track with charismatic assertiveness, as he rhymes: “I been nice, since Mike dunked with air Nikes / rappers tryna outbar me? Sh*t yeah right”.

The music video, however, may be the hidden gem of this entire tack, as they team up with director Lil Rayy for visuals inspired by “The Big Lebowski” meets “Kingpin”. With the video set at Bowling Acres Bar & Grill in Peterborough, NH, Rev, GoD iLLa, and M-Dot compete on a bowling team against various other EMS members and affiliates, and are clearly the instigators. They play the game with a sense of confidence and competitive edge, but it’s the comedic undertones that are the most memorable moments. Notably, M-Dot secretly ties an opponent’s shoelaces together, while the guys subsequently pour glue on the bowling balls. It’s around the two-minute mark that acts almost as an interlude, when the guys feverishly cackle at the expense of their victim, as he nonchalantly sips his drink with the ball stuck to his hand. The video is fresh, authentic, and incredibly balanced with a witty storyline and energized rap performances. 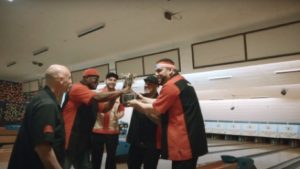 Experimental Mind State is more than a hip-hop group; they are a collective consciously pushing boundaries and finding new innovative ways to entertain. Take four minutes out of your day to laugh, smile, and hear an absolute banger of a hip-hop track. Big shoutout to Revalation, GoD iLLa, M-Dot and the entire EMS team. Be sure to stream the new album RevILLutionAries, available on all streaming platforms.

Stream “I Been” on all platforms:

“I Been” by Revalation, GoD iLLa, & M-Dot on Spotify

“I Been” by Revalation, GoD iLLa, & M-Dot on Apple Music

Liked it? Take a second to support Mike Scarfo on Patreon!