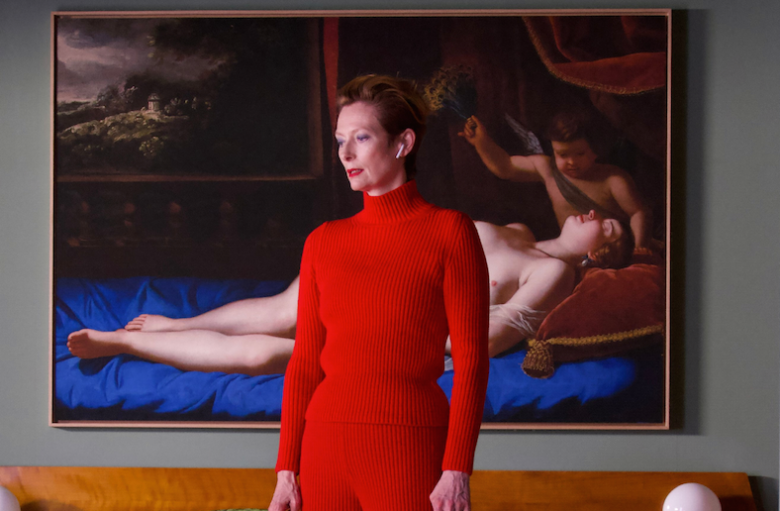 Tilda Swinton joins the legion of Almodóvar women with his latest short film, The Human Voice, filmed almost the second COVID-19 lockdown lifted in Madrid. Based on the Jean Cocteau monologue of the same name, The Human Voice gives us Swinton decked out in remarkable outfits (the red turtleneck was my favorite), spitting venom at an unseen ex-lover through her AirPods in her home (which is on a soundstage somewhere in Madrid). The short film is a small burst of joy, most notable for being the first thing I’ve watched that was filmed mid-pandemic.

In many ways, The Human Voice is the near future of cinematic expression. Until safety is guaranteed through a vaccine or simply a great ebb in COVID infections, large scale film productions are just a bad idea. They’ll probably still happen, of course, but *I* think it’s a bad idea. Here, Almodóvar starts small, but gives the short film his usual sense of cinematic grandeur. Few actors are as watchable as Swinton, and it’s clear with her delivery that she relishes the chance to work with a master director. She can command a scene all on her own, no scene partner needed, as she is obviously asked to do here with the monologue. There’s a great dog too! The Human Voice stands as an artistic gesture by Pedro Almodóvar, a reassurance that art can continue to be made under the most dire of circumstances. As long as you’re being careful.

Screened virtually via the New York Film Festival – click here to follow our continuing coverage!
Available… soon? Probably before the Oscars at least?