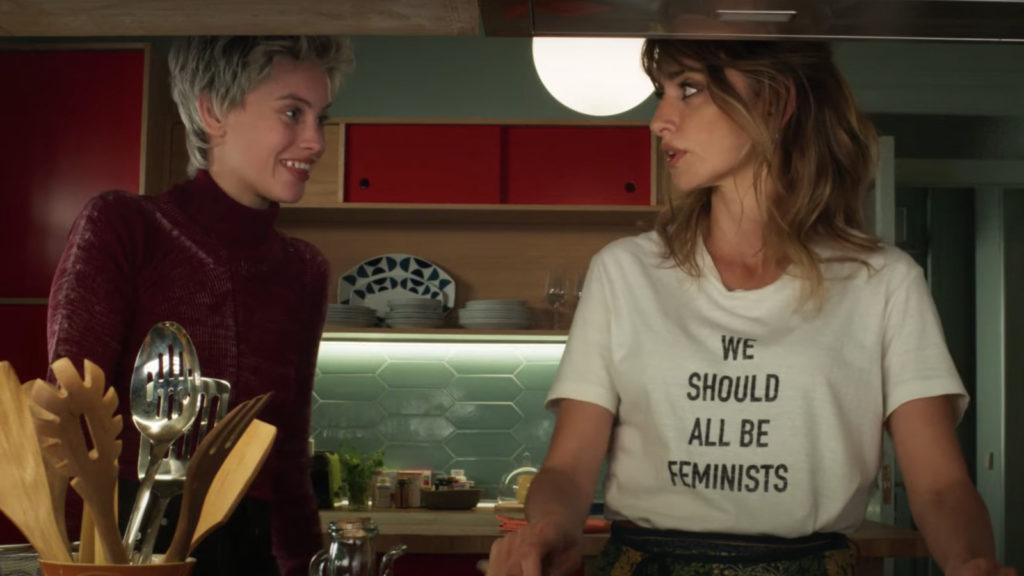 Parallel Mothers is arguably Almodóvar’s most overtly political movie. It captures so many of the director’s preoccupations—city versus country, past and future, mothers everywhere, secrets, affairs—and then sets them against the backdrop of Spain’s fascist history and the missing people from a revolution mere generations removed from the present.

The movie follows Janis (played by Penélope Cruz), a photographer who begins a relationship with an archaeologist. Although it evolves into a romantic relationship, Janis initially seeks to work with the archaeologist to find and uncover the mass grave in her hometown, in which her great grandfather was murdered and buried– a common occurrence under Francisco Franco. Parallel to this journey into the past, Janis, after becoming pregnant, forms a bond with a pregnant young woman named Ana (played by Milena Smit). The two women’s stories intersect in unexpected ways, as Almodóvar uses familiar melodramatic genre conventions to craft a complex story centered around something so deceivingly simple as truth.

This ideal of truth is manifested in many ways throughout the movie, but Parallel Mothers seems most concerned with image itself. Janis is a photographer, and so we often revisit her working with both living models and physical objects, her work an attempt to capture something honest via her camera. Likewise, photos of the living and the dead, computer screens, and baby monitors all take up the screen at certain points, with so much of the story hinging around these things and what they might show or reveal. Images become more than simple representation of a thing, however, and are instead posited as memory, artifact, and history—powerful representations of something concrete or a symbol to reveal something abstract.

Penélope Cruz is the movie’s core, and her performance is a powerful and masterful work, bringing to full-blooded life one of the most potent Almodóvar characters to date. Janis, a complex characterization in ways both new and familiar to the Almodóvar oeuvre, confronts unspeakable truths in both her familial history and her new relationships. Certain boundaries become blurred, and Cruz traverses the internal struggle that Janis faces, capturing the distinct and difficult mental hurdles of a character careening from dizzying heights of satisfaction to soul-crushing crisis. Whereas other actors may have fumbled, turning Janis and her more unsavory decisions into an unsympathetic representation, Cruz maintains a perfect harmony throughout. For Almodóvar, Parallel Mothers is a stunning follow-up to his previous masterpiece, Pain and Glory. There’s something so delicious and satisfying watching him set out in new directions with his familiar set of actors and incredible new additions—Milena Smit is an exciting find, feeling like an old compatriot within the deep relationship that Almodóvar and Cruz have forged over decades.

Ultimately, with Parallel Mothers, Almodóvar dips into familiar territory but positions his standard beats of melodrama against surprisingly incisive political commentary. The movie connects the historical to the interpersonal, thus making its characterizations and its story more powerful and complex. The movie seeks to right wrongs, reveal truths, and most importantly, bring people together in new ways, removed from fascistic regimentation. In uncovering the truth, one can move forward, perhaps not necessarily finding closure but maybe finding the next step, maybe making a connection.