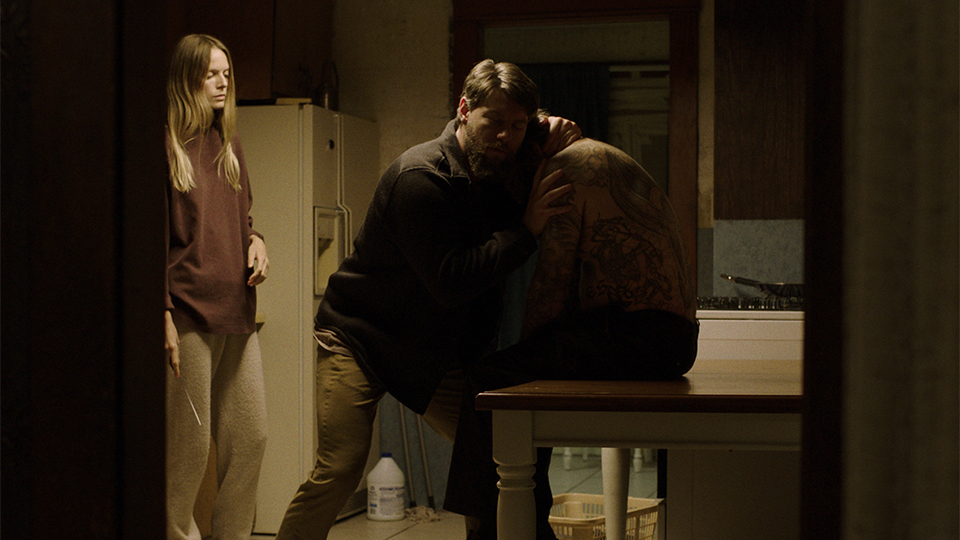 Vampirism has long been a hallmark of the film world. From Nosferatu to Twilight, to smaller films like A Girl Walks Home Alone At Night and Let Me In, the bloodsucking undead have always enjoyed the spotlight even though they can’t go into the sun themselves. This year is no different, thanks to Nightstream. Director Jonathan Cuartas delivers a chilling tale of family, desperation, and blood in his first feature, My Heart Can’t Beat Unless You Tell It To. With a standout performance by Patrick Fugit (Almost Famous, Gone Girl) and sublime cinematography, Heart Can’t Beat is a fantastic addition to vampiric filmmaking. I wanted to watch it again as soon as it had ended just to spend more time in Cuartas’ cold world, but I’ll settle for seeing it in a theater sometime next year and forcing all my friends to come with me.

Dwight (Patrick Fugit) and Jessie (Ingrid Sophie Schram) are siblings who live seemingly nocturnal lives as they care for their chronically ill younger brother Thomas (Owen Campbell, looking like a lost Culkin brother). Thomas is a sweet kid, except for a couple glaring issues. He is ultra light-sensitive and has terrible seizures and fits unless supplied with a constant stream of human blood. Vampirism in this world is a sickness, a destructive disease that threatens to take the entire family down with it. Dwight is usually tasked with kidnapping homeless people and slitting their throats, a routine that is eroding his soul. Jessie does not share Dwight’s moral concerns – she just wants Thomas to be comfortable by any means necessary. We join this dynamic right at its breaking point and watch the collapse for 90 minutes. My favorite kind of film!

Fugit has always been a reliably great supporting actor in films like Gone Girl and Queen of Earth, so it’s satisfying to watch him knock a leading role out of the park. He plays Dwight with an incredible sadness – half his scenes involve him sitting bare chested on a bed looking painfully vulnerable or mopping up blood with tears in his eyes. I was unfamiliar with Schram before this film but she makes a great first impression, as does Campbell. So much goes unspoken and is only conveyed through meaningful looks between the siblings or karaoke sequences set to “I Am Controlled By Your Love”, which gives the film its lengthy title. The word vampire is never uttered, and it can be easy to read Heart Can’t Beat as a grim tale of being trapped by familial bonds far beyond the point of redemption. How much is too much to help someone you love? What are you willing to lose?

It can be frustrating reviewing festival titles without knowing when the general public can see them. Sometimes they can drop out of my head before a release date is set, but I know that will not happen with Heart Can’t Beat. Hopefully my review can be an early signal to others that what seems like just another vampire story will be worth their time.

My Heart Can’t Beat Unless You Tell It To
2020
Dir. Jonathan Cuartas
90 min

Viewed as part of Nightstream, a virtual festival that I hope becomes a new tradition in meatspace as well!

Tags: Jonathan Cuartas, My Heart Can't Beat Unless You Tell It To, Nightstream