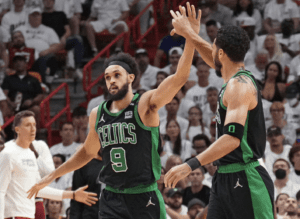 The ‘21-22 Boston Celtics mentioned many times at Sunday’s championship trophy ceremony of “getting over the hump” by conquering Miami to get to their first NBA Finals since 2010. The viral clip of Jayson Tatum and Jaylen Brown embracing, Tatum repeatedly saying “they said we couldn’t play together” represents a bumpy stretch of the regular season we all can remember well. Mid January. A loss at home to the 19-26 Portland Trail Blazers. Back to back losses, at that. It will be highlighted a lot this week about how record wise that became the turning point, where the energy began to shift.

And here there are. At the NBA Finals playing against a veteran laden Warriors team starving for redemption. Here’s three keys to the series to look out for:

Who’s gonna guard who? Will it work? What adjustments will be made?

Possibly the two most versatile teams in basketball, both placed top five in defensive rating and possess dynamic offensive personnel. Boston and Golden State will deploy multiple looks and strategies to stymie the other. Coaching will be an important factor, however it will come down to who can hold their own on offense against great defensive game planning and personnel. Look for Marcus Smart to take the primary assignment on Stephen Curry. Klay Thompson vs Jaylen Brown should be a good matchup whenever they stick each other. Even the post players and bench mobs feel evenly matched. Draymond Green and Al Horford are two of the best non traditional bigs in the league. Robert Williams III will play a huge part also, as his elite rim protection has been a weak point to past iterations of Golden State. Be ready for a lot of switching from Boston, as it has had success against the Warriors historically. Who will win the minutes when the stars sit? Will Boston go small to match the Warriors death lineup? Is Jordan Poole or Daniel Theis playable in this series? We shall soon find out.

The road to 16 wins many times includes facing four teams en route to hoisting the Larry OBrien trophy. Both Boston and Golden State have done so, along the way catching a small case of the injury bug. Marcus Smart’s gruesome ankle injury suffered in game three of the East Finals won’t keep him out and is listed as questionable, while Williams III claims his knee soreness is manageable. For GSW, Gary Payton II is day-to-day still while rehabbing a broken elbow he experienced in game 2 of the West Semis against Memphis. Payton II, along with Andre Iguadola (neck, leg) and Otto Porter Jr. (foot) practiced on Wednesday and are listed as questionable, also. Why is this important? For a series this evenly matched, role players will make a difference, especially when making adjustments and shifting personnel groups to gain an edge. For both teams, being at full strength only makes their level of play increase and allows Ime Udoka and Steve Kerr to make changes on the fly that could decide the championship.

These are two of the best teams in the sport and deserve to be playing for the NBA championship. The road to get here is not easy, and for teams like Boston “getting over the hump” oftentimes feels like the title has already been won. That the hard part is finished. Kinda like when you beat the Elite four in Pokémon but forget you have to face the champion. Well, over the past decade the Warriors have been Cynthia from Pokémon Diamond/Pearl or Lance from Pokémon Gold/Silver/Crystal. Players on Golden State have played in a combined 123 NBA Finals games. Players on Boston have played none. The last time this took place in Finals history was when in 2015, a young Golden State Warriors team got over the hump to win their first title in 40 years. Boston has shown a tendency to stumble in tight moments during these playoffs, giving up leads in the fourth quarter or coming out flat from halftime. Neither can happen against this team. Golden State does turn the ball over (14.8 per game, 12th in NBA) however the type of shots taken when executed correctly more than make up for it. Mental lapses and unforced errors will be an area of focus for Boston. With two of the greatest shooters ever out there, small windows of space look like large bodies of water to shoot into. The race to four wins and basketball supremacy begins tonight. Time to get your popcorn ready.