Recently I told an acquaintance I was going to a drag show, and they replied “They have that in Boston?”

I’ve been going to drag shows since I was old enough to go out; for many queer people, they’re a staple in our nightlife experience, something we can count on as a never-ending source of amazement. And in Boston, drag is everywhere right now, not just in gay clubs – you can find brunches, bingo nights, cruises, gallery openings, markets, and even storytimes at local libraries. More than ever, there is so much public acceptance and appreciation of drag artists. In the moment, that acquaintance’s comment really caught me off guard, a surprising reminder that so many Bostonians don’t know about our thriving drag scene.

That is why there’s such a need for a publication like Playthings: The Drag-A-Zine, created by local drag artist Nadya Plaything, which features photographs, illustrations, essays, and interviews with some of Boston’s freshest performers. Playthings: The Drag-A-Zine helps bring the work of local drag artists into the public eye, not just the queer community, but also “anyone with even the slightest of a passing interest in drag, gender, art, and performance.”

On August 31st at 8pm at Trident Booksellers, Nadya will be releasing the very first issue of the Drag-A-Zine! Not only can you get your hans on a copy of the zine, there will be 8 performances by artists featured in Issue 1 – so bring bills! The Hassle had the pleasure of speaking to Nadya before the event about her relationship to drag, venues in Boston, and what we can expect from Playthings: The Drag-A-Zine (spoiler: it’s gonna give you life)! 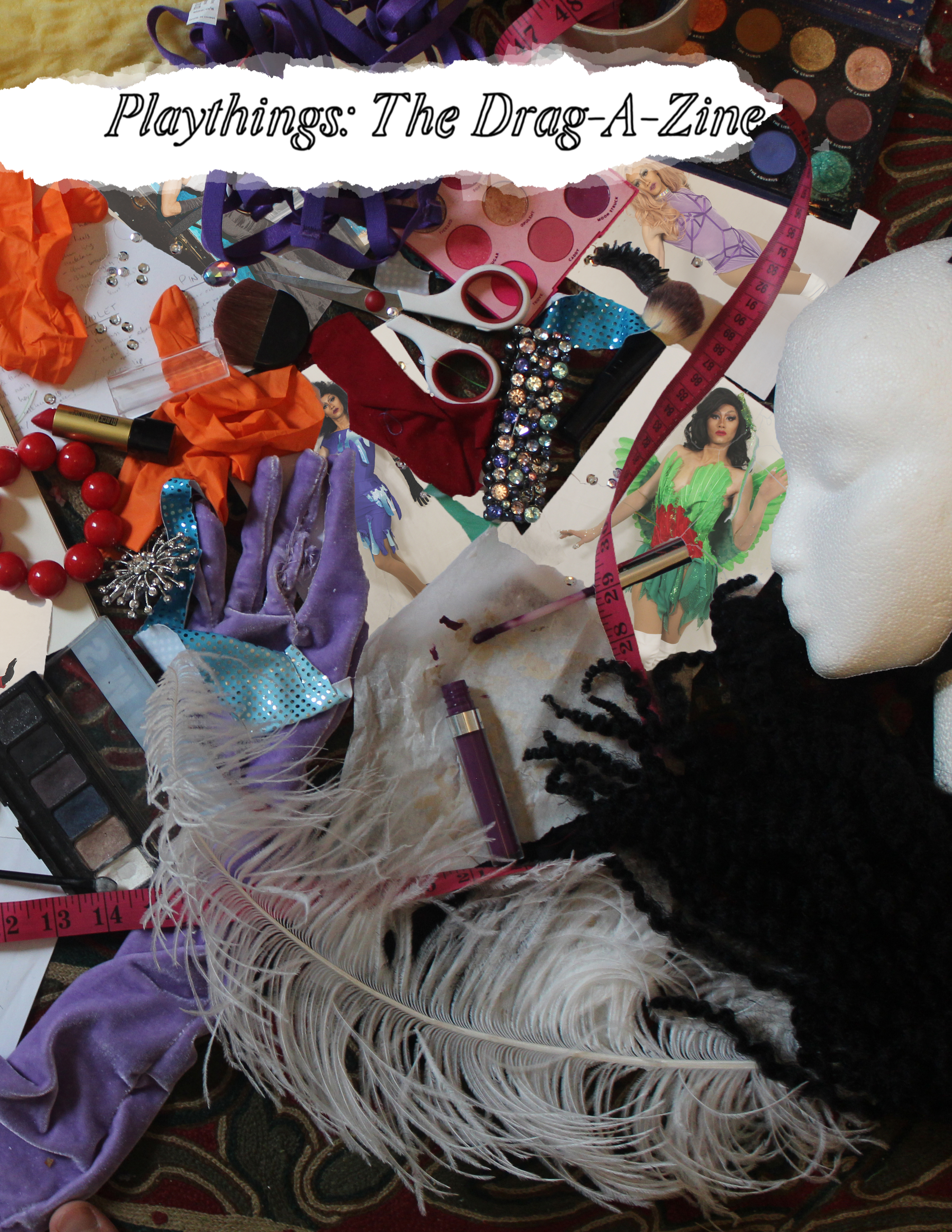 Tell us a little bit about yourself!

Hi! I’m Nadya Plaything, though most of the time I’m Patric. I’m a Boston-based writer, storyteller, and theatrical artist. I was born and raised in Los Angeles, CA, but I moved to Boston about five years ago for school. Nadya Plaything was born at a college drag night, where I lipsynced to Beyonce’s “Sorry” in a LBD and felt FIERCE! After graduating and performing at a few parties hosted by DJ Saskia, Civilization (another local queen) encouraged me to get more involved in Boston’s drag scene, and the rest is history!

What motivated you to create the Drag-A-Zine?

I’m naturally an introvert and I’ve always been a book-lover. Part of my motivation for creating this zine came out of looking for different spaces outside of the typical bar, nightclub, or party atmosphere to express and celebrate drag. I believe that drag is an artform that can be exhibited through a variety of media; performance is a big one, and this zine is another I wanted to explore. I was also inspired by Sasha Velour’s Velour Magazine.

Why are you interested in covering Boston’s drag scene? Why do you feel it’s important this type of coverage exists?

Before I began performing in drag, I was a huge fan of drag. As someone who’s interested in theater and performance, I looked to drag shows as places where incredibly radical and innovative performances are being tested. I think that so few people in Boston outside of the community see the unprecedented work that drag artists do, and that’s a shame! More generally, I don’t think drag artists and performers are seen with the same respectability as other artists. I think it’s important to elevate queer artists that are working on their own terms, celebrating ourselves and our passion! 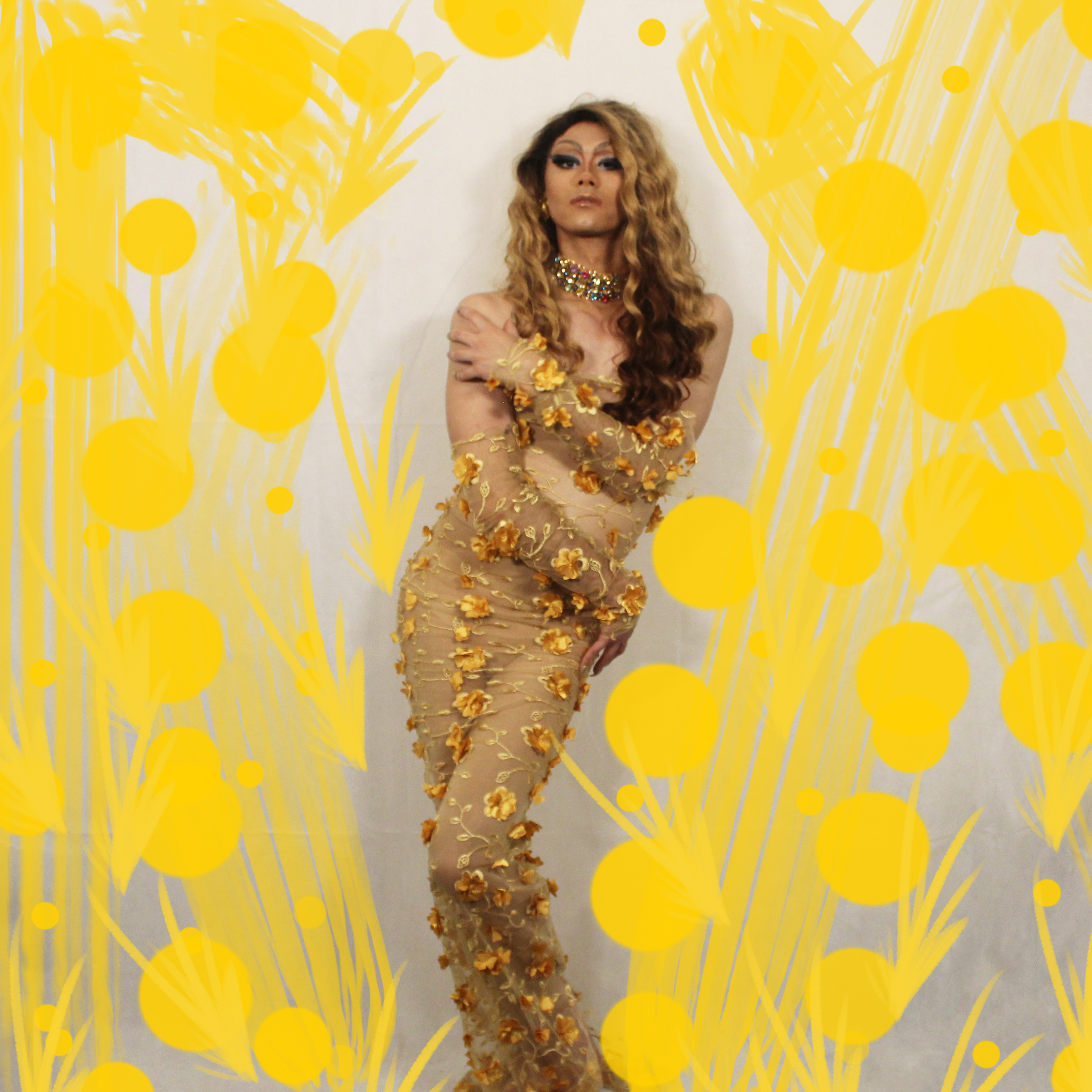 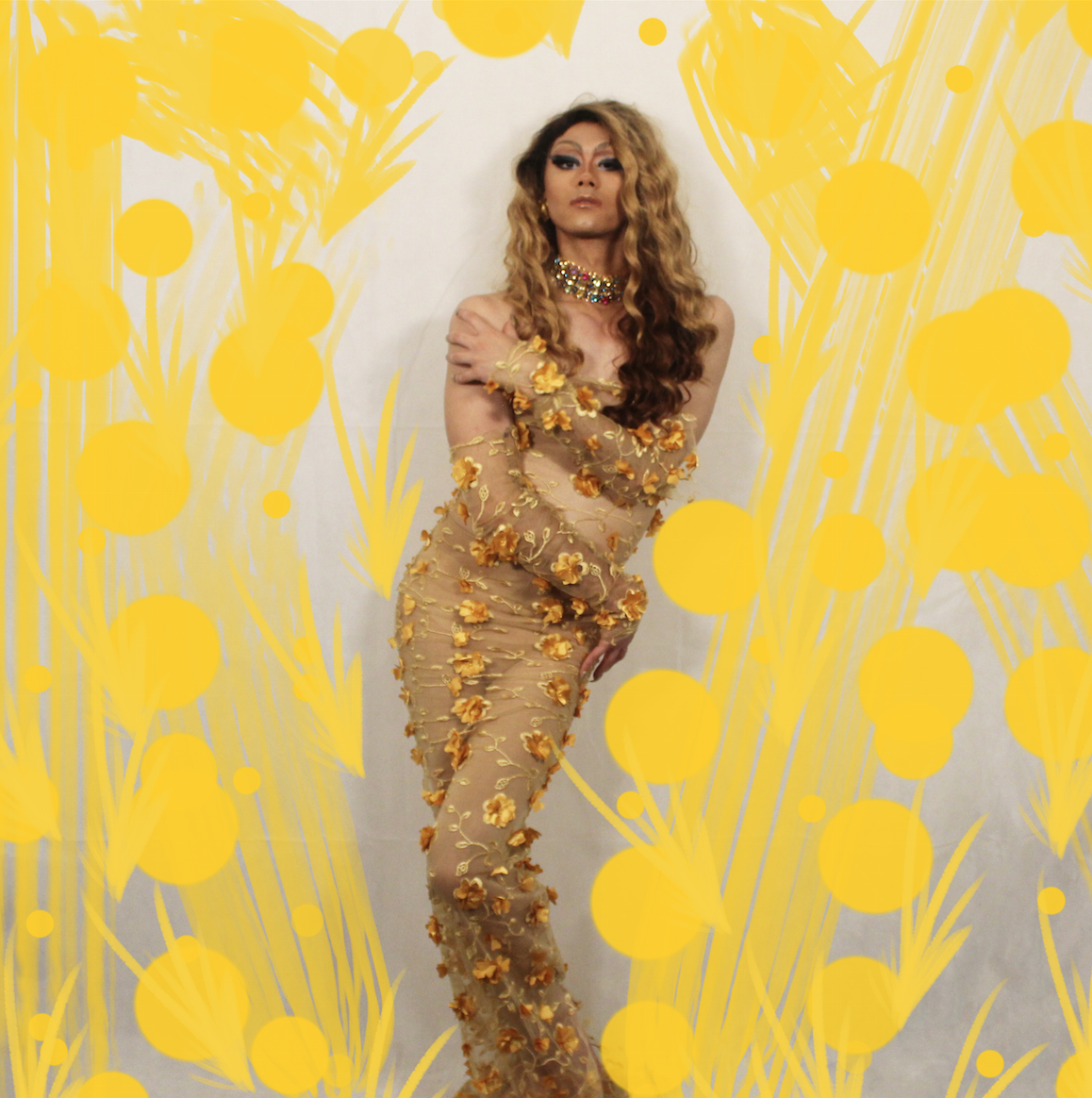 What do you think of Boston’s drag scene? Where do you like to go to see performances?

I’ve been to drag shows in different cities across the world, and I truly believe that Boston’s is one of the most exciting and eclectic drag communities. I am going to be competing in the third cycle of Boston Drag Gauntlet at Jacques’ Cabaret, a Drag Race-esque elimination-style bi-weekly competition. This cycle is going to be bigger and better than over, so come root for #TeamNadya! If you’re free on a Monday night, All Star Mondays at Machine Nightclub is where a lot of new performers get started. The early show is open to anyone, and it’s a place where even established performers are able to experiment and try new things. Gay Bash’d and Houseboi are also incredible regular events that showcase local drag artists.

Who will we see in Issue 1?

I’m not exaggerating when I say that you’re going to see some of Boston’s most unique and exciting drag artists. I made a conscious decision to include a diversity of drag artists, styles, and identities in this issue. As soon as you open the cover, my hope it that you’ll see how varied Boston’s drag scene really is. Issue 1 also includes pieces by illustrator Yank from yank_n_bird,  photojournalist Olivia Falcigno, writer Jordan Villegas, and artist James Paolicelli about drag.

What will be in the Drag-A-Zine?

How frequently will issues be published?

This really depends on the reaction to Issue 1. The zine is a labor of love, and it’s self-published by yours truly. I would definitely love more issues to be published in the near future. So, if you’d like to see more, please donate to the zine and let us know how much you love it! I’m already brainstorming some sickening themes for Issue 2… 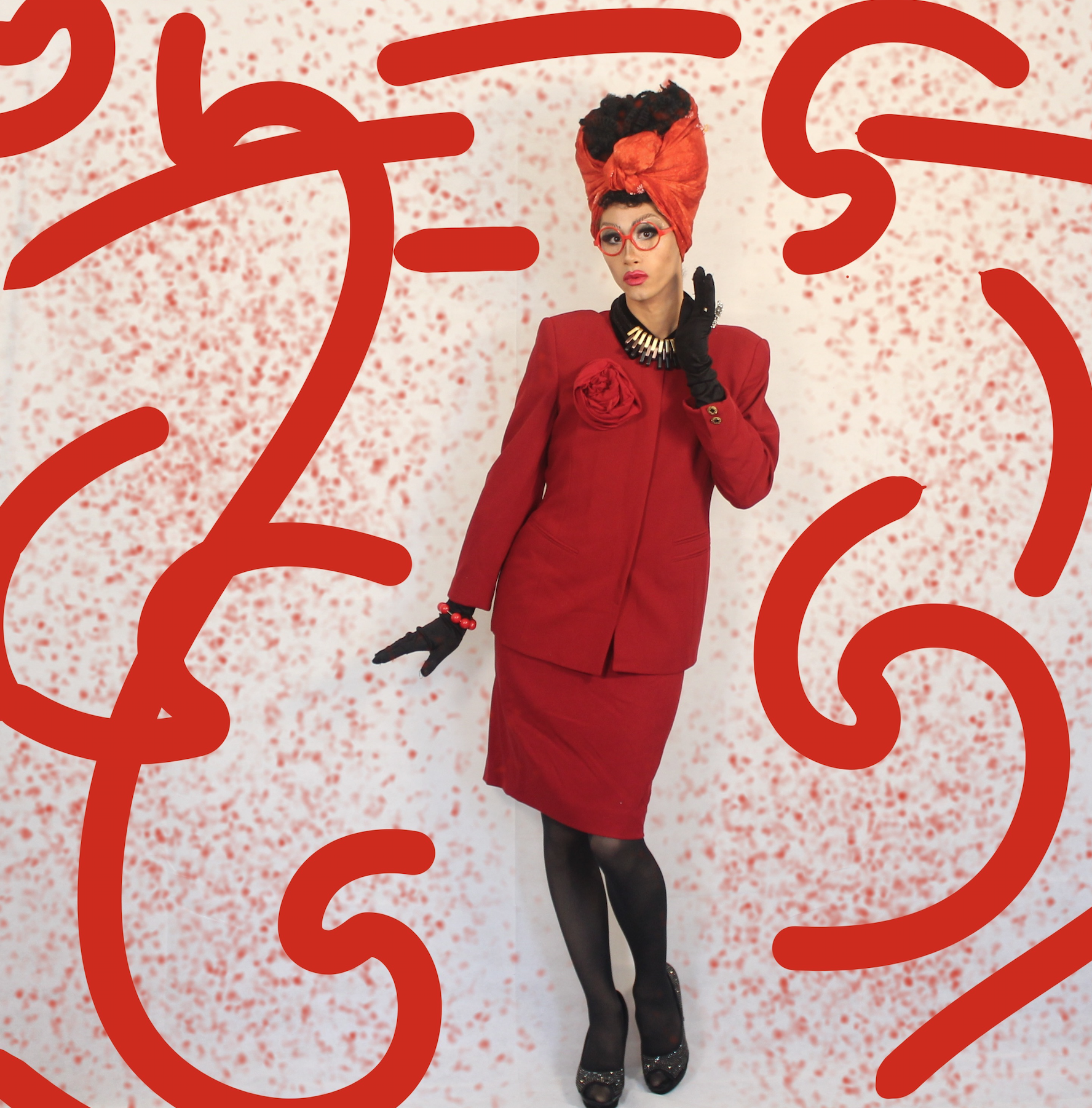 Where can we find Playthings: The Drag-A-Zine?

If you’re in Boston, the Drag-A-Zine will be traveling to different drag shows and venues, so follow us to make sure you stay up-to-date on our whereabouts. It will also be available at Trident Booksellers and other zine libraries and bookstores across Massachusetts and New England. If you can’t find us somewhere you think we should be, please let us know! It’ll also be available for purchase online at playthingsthedragazine.com.

Who is the Drag-A-Zine for?

This Drag-A-Zine is for anyone with even the slightest of a passing interest in drag, gender, art, and performance. If you’re a hard-core drag fan, this is for you. If you’re not really sure what drag even is, this is certainly for you. If you like looking at gorgeous photographs, reading thought-provoking historical reports, and/or peeking behind the sequined curtain into the life of a drag artist, this is for you!

What should we expect to see at your launch event (8pm on August 31st at Trident Booksellers)?

You can expect a DAMN GOOD SHOW. I’ll be kicking everything off with a little speech about the zine and what it means to me. Eight of the Drag-A-Zine’s contributors will be performing so, if you’ve never seen a drag show with your local Boston drag performers, I especially encourage you to come! It’s going to be something really special.

I can’t stress enough for people to reach out to us if they’re interested in the zine! I’m incredibly proud of the work that my fellow collaborators and I have put into it.