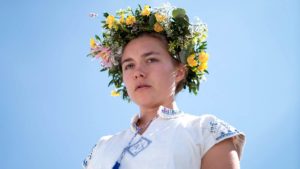 A24’s pumped out some enthralling films in the past few years: Hereditary, Mid90s, High Life, It Comes At Night, The Witch, Lady Bird, A Ghost Story. I do have the ability to ramble on for ages about these films and the progressive studio that is A24, but I’ll hold off for now.

Nevertheless, an A24 film that shook me to the bone as of late is none other than the surrealistic horror, Midsommar. Directed by Ari Aster (the same brilliantly insane mind behind Hereditary), the film unfurls the Disney-gone-dark tale of Dani Ardor (Florence Pugh) as she enters the isolated and twisted world of the Hårga, a protective and secretive commune deep in Hälsingland, Sweden. Flanking her are her emotionally vacant and unlikable boyfriend, Christian (Jack Reynor), and his equally unlikable friends, Mark (Will Poulter) and Josh (William Jackson Harper). They are brought there by mild-mannered and soft-spoken Swedish student Pelle (Vilhelm Blomgren), a recent addition to the friend group. It’s where Pelle grew up, and he is taking them there under the pretense that they will experience a once-in-a-lifetime festival that only occurs every 90 years. As they are all are anthropology students (except for Dani), they see it as a brilliant opportunity for their theses. Dani is still reeling from the staggering and sudden loss of her mother, sister and father (a real gut-punch to start off the film—the score and Pugh’s bereaved sobbing and moaning alone will haunt you long after the film’s stopped rolling). Despite her loss—and upon the subtle urging from Pelle—Dani travels to Sweden with the guys (and to half-heartedly salvage the crumbling mess that is her and Christian’s relationship). As the trip unravels to be a disturbing spring break from hell, Dani finds the new home she’s been desperately trying to rediscover—even in the darkest of places.

Aster wrote Midsommar as a break-up movie, veiled as a folk horror film with splashes of The Wicker Man (no, not Nic Cage’s) and Modern Romance. The Museum of Fine Arts will be screening the director’s cut of Midsommar at a runtime of 146 minutes, including 23 minutes of new footage and extended scenes. The director’s cut, I believe, is the way it should be seen– the way Ari Aster wrote and imagined it. In the director’s cut, we see more of the “break up movie,” something that I think the theatrical cut would have benefitted from in order to build tension and reasoning behind the fates of some of our characters as the film comes to a close. 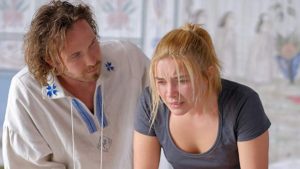 There are a multitude of things that were cut from the theatrical run of Midsommar, but the most notable would be Christian’s gaslighting of Dani and the emotional abuse he consistently subjects her to. As she grieves at her loss, Christian is constantly belittling her, making it seem like she’s crazy or clingy for wanting to talk things through (in a very civil manner, mind you). No, Christian, she’s just a young woman, miles away from her home, that has just lost her entire family. She’s not clingy, she’s not crazy, she’s devastated. When I watched Midsommar for the first time (I luckily saw the director’s cut the first time round), I was baffled at how Christian treated her: not telling her about the trip to Sweden, constantly acting annoyed, and pretending everything is Dani’s fault.

Three scenes stand out. The first is the apartment scene after Dani and Christian return from the party in which Pelle reveals that they’re all going to Sweden. After trying to calmly tell Christian that she is bothered that he didn’t tell her about the massive European vacation he’s taking, Dani is in tears when he keeps threatening to leave. “Stay, stay, please don’t leave. Please don’t leave,” she begs (Pugh’s acting again is phenomenal, she had me near tears). After many eye rolls and heavy sighs, Christian coldly has the audacity to lie to Dani and say that she “ruined the surprise” and that he was “going to invite her to Sweden all along.” In the end, despite him being in the wrong, Dani is apologizing profusely. Christian has gaslighted the life out of the poor girl, and the key to that is when he says “you ruined the surprise.” This was cut from the theatrical version, which I personally think is a shame. It shows how slimy and cruel Christian is and how he is further worsening Dani’s fragile mental state.

The second scene is after a particularly unnerving ritual that the Hårgans perform. Dani and Christian, again, begin to fight in the darkening woods. She asks Christian if he still loves her and in response (because he knows he doesn’t), Christian maliciously spins the argument against Dani, gaslighting her again, saying that she is manipulative and cruel and horrible because she does nice things for him (she had given him a small bouquet of flowers earlier). He additionally barks at her that because of her kindness, he feels in debt to her, and he says it’s something she’s purposefully doing. It’s just his way of getting out of saying “I love you.” That’s Christian’s out for everything: lie, lie, lie some more, and gaslight the hell out of the girl who needs him most.

The last scene is a split second: when Christian forgets Dani’s birthday, but Pelle remembers and reminds him, taking him aside and telling him with a slight sternness in his voice, it makes a difference. In the theatrical version, you almost can’t make out what Pelle has said; you only piece it together because of the following scene in which Christian tells Dani “happy birthday.” In that split second that was cut, Pelle acts concerned and slightly irritated at his friend, creating a strong foil to Christian. That’s another thing, as well: Aster paints an incredible portrait of differences between Christian’s absent, uncaring nature and Pelle’s soft-spoken, nurturing warmth to Dani. Christian walks away and refuses to talk to Dani when she’s upset; Pelle sits and begs for her to stay and talk.

These three scenes made me completely unsympathetic to Christian; to be honest, it kind of made me feel as good as Dani did by the end of the film. Without these small but key scenes, I feel as though the tension and reasoning is not as strong. In the theatrical cut, Christian’s fate is less deserving because we don’t see the detailed abuse he inflicts upon the fragile Dani.

There are so many things in the director’s cut of Midsommar that I could write and ramble on about, but I believe that the emotional abusive/break-up scenes that were cut between Dani and Christian were some of the most important. It makes you understand (as much as you can) Dani’s choice at the end and her eerie smile. These scenes give context to their relationship; you understand Christian and Dani better, both as individuals and as a couple.

Midsommar is a film that demands to be watched again and again, because there’s always more to notice and write about it. It’s a film that ensnares your mind and you will always become aware of something you hadn’t seen before with every viewing.

Go see Midsommar: The Director’s Cut. It’s a haunting piece of cinema that explores the darkest desires and aspects of the human relationship.

Screens at the MFA on 10/31 at 8pm – double feature with David Lynch’s Eraserhead!