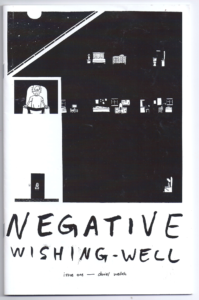 It is difficult to find Daniel Welxh online and only a Patreon with little content is cited on the zine which makes me think Welxh is just getting started and why I am so happy to have picked up their first issue of Negative Wishing-well at the Black Market in February. Where else could I have found it?

Negative Wishing-well was released last year along with a few mini zines, like Waiting, that have a similar downer vibe and symbolic cast of characters. In Negative Wishing-well, you are taken through eight vignettes staged under the heading “a comic album about intimacy.”

The first scene, “Negative wishing-well #1 (11:48pm),” is the longest with a reoccurring character illustration overlaid on photographs of street views and interiors. When we see the character again in “Negative wishing-well #0,” the will break the fourth wall during an intimate act. The scenes are detached and the reader will shift from voyeur to sympathizer throughout the zine. 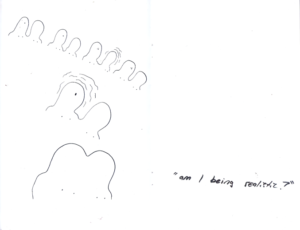 Like with the reoccurring “am I being realistic?” line drawings, you can picture these two almost separate beings in a public space melding together with each smooch. You’ve seen them. You’ve been them. Or, maybe it is a metaphor for relationships in general? Nonetheless this twenty-eight page, folio style, black and white printed zine covers a lot of different illustration styles and narratives that are familiar, personal, and relatable.

I look forward to the future of Negative Wishing-well… wherever you are, Welxh.

The Dorchester Art Project Zine Library has grown this year to 280 zines. 280 zines tucked away in the wall of Dorchester…

Thanks to generous donations, the Dorchester Art Project Zine Library has a varied collection of over 200 zines. Recent donations include local…