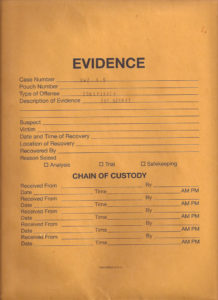 Psssst. You’re now in the secret loop of information distribution revealing all the deep dark secrets of our political system starting with an interview with Trev, vocalist of AXEGRINDER, and Dan Birdman Burton. Which means if you’re expecting the same old same old JFK, MLK to 911, then Death Wound Zine (DWZ) 3.5 Conspiracy Issue is not for your eyes. 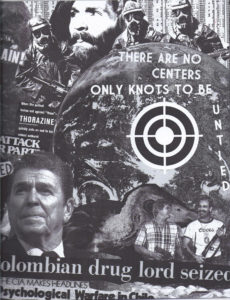 DWZ is for the doomsayers hungover from raging all winter long. It’s for the serious, the attentive, and those who seek beyond the echo chamber. The zine’s conspiring tone begins with the packaging marked with symbolism and a manila envelope labeled “EVIDENCE” like that of a curated experience from a subscription service (e.g. Hunt a Killer). The large printing, A4, black and white photostat, negative, and collage aesthetic is a lot to look at as well as the full color cover and added poster by Joe Keinberger.

Keinberger’s cover painting It waits at the center of the earth, quietly spooling the loose red thread of the world until it is collected and all undone was the inspiration for Wm. C.’s article, “Threads: A dossier on conspiracies past and present in three parts.” Don’t let the title fool you. It isn’t a lecture. Wm. C.’s writing is a dialogue which will leave the reader unscathed and with much to ponder as long as they acknowledge that there may be no answers.

Are we the beast pulling the thread?

The last article, “The arrogance of fools” by Dr. Sleaze Hound, is a kick in your butt on the way out. A real “humpf” moment that you can hold on to for the rest of the week (or longer if you don’t convince yourself otherwise).

If this all sounds like your vibe, check out more releases from Death Wound including the recently reviewed Missionary Work Seven Sermons LP, style, or just tweets and instas.

The Dorchester Art Project Zine Library has grown this year to 280 zines. 280 zines tucked away in the wall of Dorchester…

Thanks to generous donations, the Dorchester Art Project Zine Library has a varied collection of over 200 zines. Recent donations include local…