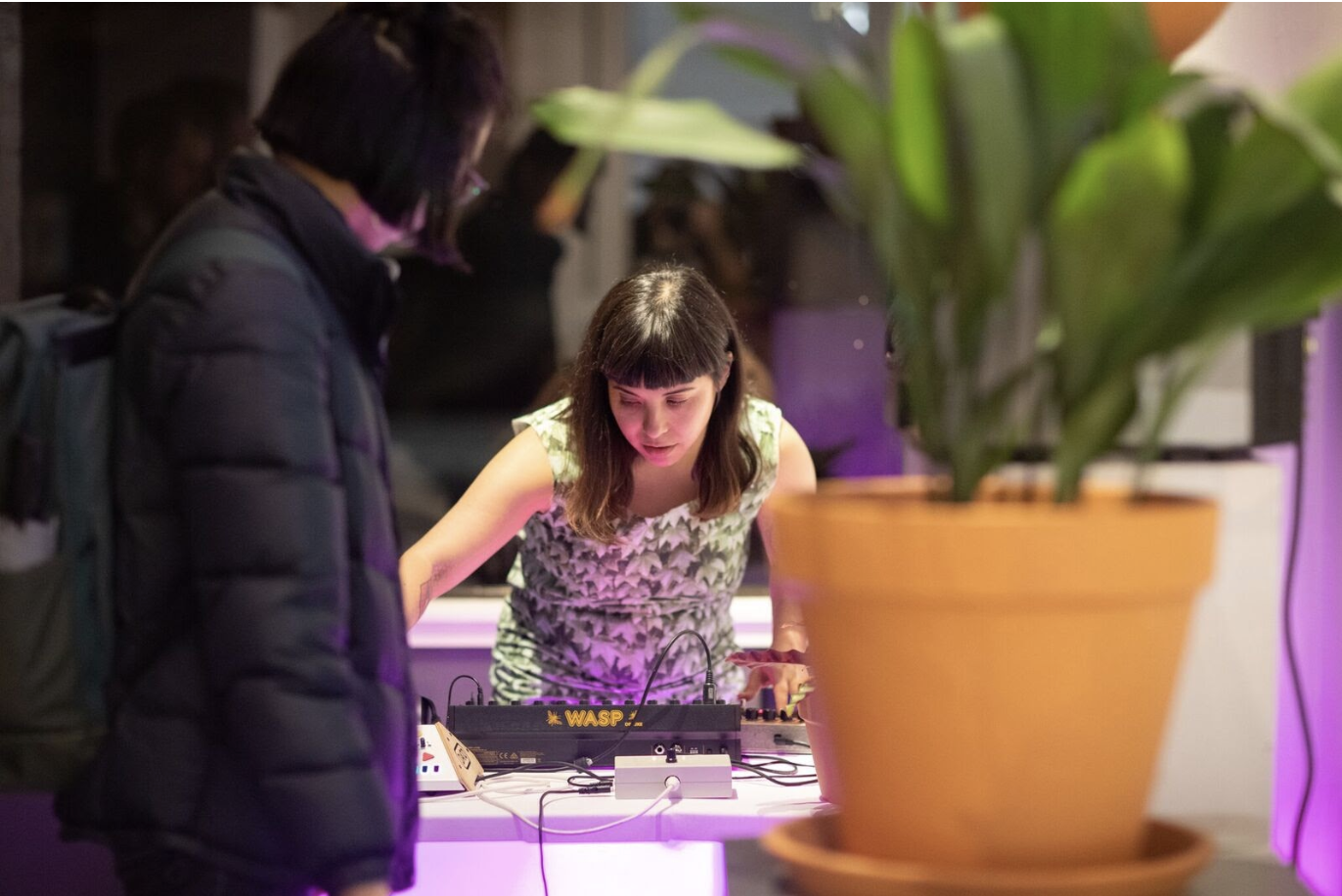 From February to early March, the quaint Brookline Arts Center’s glass-windowed gallery will be filled with sound. Lani Asuncion’s HUMAN GARDEN | Biosounds exhibition is a radical invitation to reconnect with the land by appealing to the senses. The performance is activated by Asuncion and visitors, which, as Asuncion explains: “will enable visitors to listen to the sounds made from the plants in the gallery and create a collaborative rhythm by touching and interacting with them.” The show’s collaborative nature makes it well-suited for the Brookline Arts Center, which strives to bring the Brookline community together through art classes, workshops, and accessible exhibitions like HUMAN GARDEN.

I first had the pleasure of encountering Asuncion’s work at Boston Cyberarts’ Body Mass show this past summer. Asuncion’s BLOODLESS Series, a multimedia exploration of the 1893 annexation of Hawai’i, evokes a similar disconnect to land on a larger, historical scale. Despite the differences between the two installations, the theme of connection to place and the tensions between human passivity and activity with respect to the environment ground both pieces. With HUMAN GARDEN, as with BLOODLESS, Asuncion plays with the fluidity of time and space, allowing the past to confront the present and hopefully influence the future. I caught up with Asuncion after the opening reception and performance because I was curious to hear her thoughts on the core function of HUMAN GARDEN, and what bringing us together can reveal about our understanding of community in its most tactile sense. 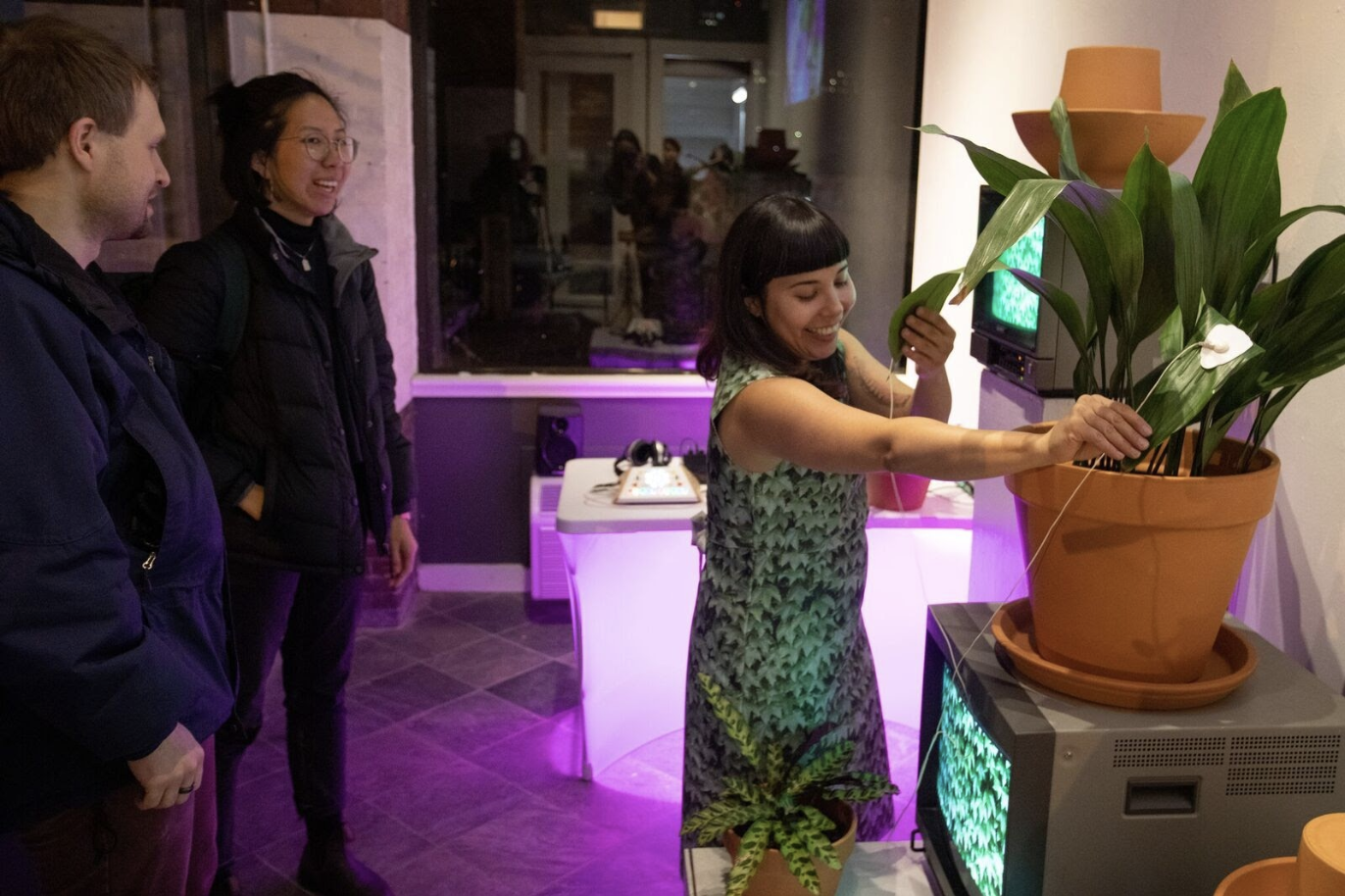 Boston Hassle: Could you expand on your exploration of intra-human alienation (and gentrification) and how you hope to elevate that discourse through confronting alienation from the natural world?

Lani Asuncion: On the most basic terms, the alienation I mention is due to urban development and how environmental spaces are structured to allow or embed access. But, I also see it on a micro-level, self-inflicted by busy people who are encouraged to have material centric lives. When objects become more important than the plants and people around us I think something is lost, a sense of place and self. Today I performed for the MIT Press office and it was amazing how excited people were to hear the plants they work around every day come to life through sound and stimulation by touching them.

BH: What do you think is it about sound that invites a deeper connection to the natural world?

LA: I think sound is closely linked to language and speech, audible stimulation connects back to humanness. I think when people hear and see the plants responding to the stimulation they feel like they are talking and trying to communicate something. When I do workshops and perform I explain technically how things work and many times I get questions about ‘how do the plants feel?’ or if they are conscious of what is happening and my response is I don’t know but scientifically and technically something is happening and that I do the work so we can have these kinds of conversations. 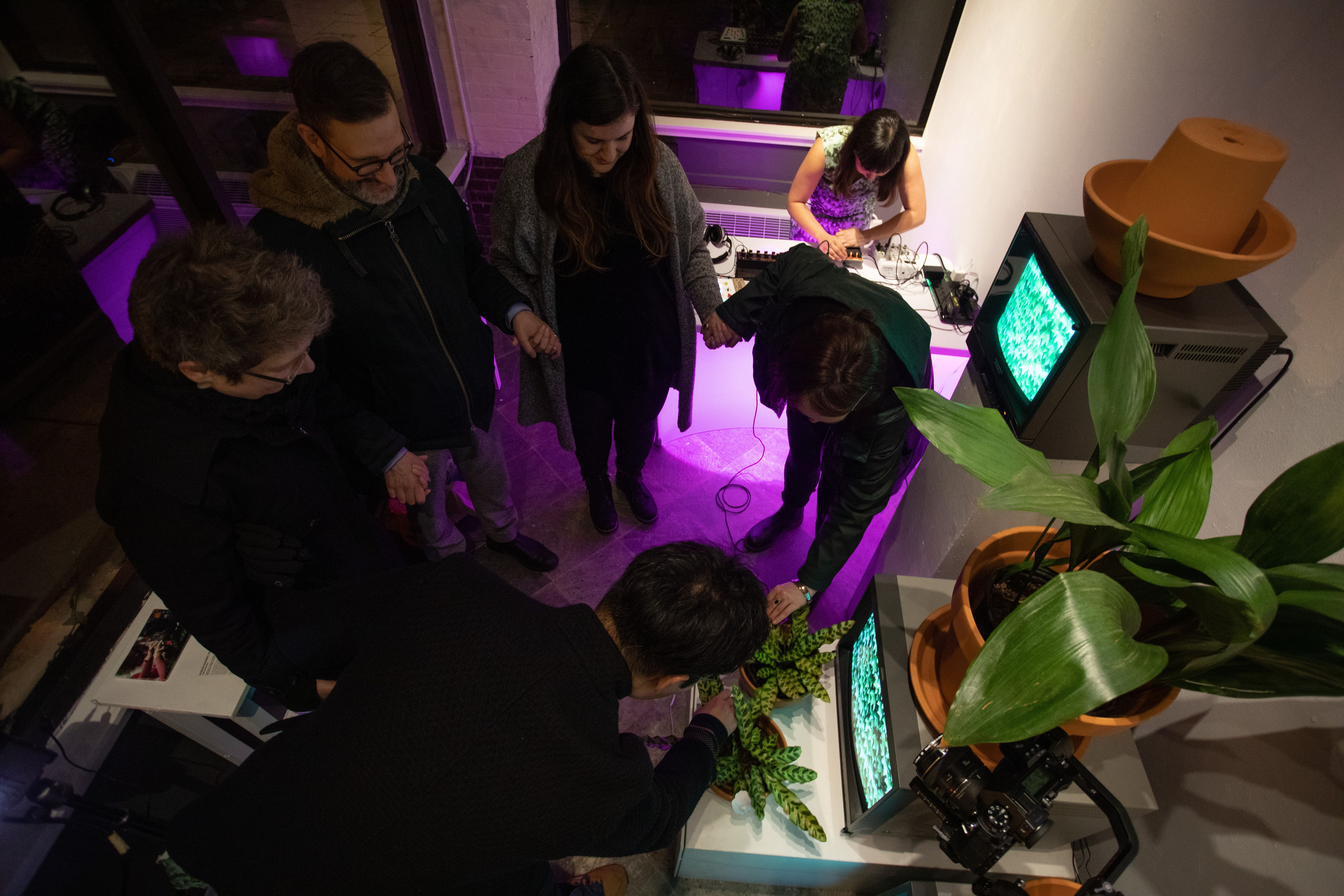 BH: When you initially source biodata, do you do so alone? What is the experience like interacting with plants in this way, and what do you hope visitors draw from this experience?

LA: Sometimes, but these days I have been opening my performances to public participation. I hope that by offering a chance for people to connect and make music with plants they will not only have a different experience but view their natural environment in a deeper way. It is so nice to offer people a chance to play and be curious, to explore the possibilities of something like plants that can become a decoration in an office or something busily passed by in a park on the way to the train.

BH: How does your relationship to life/land manifest itself differently across different media (audio, visual, other)?

LA: The form of my work shifts but is consistent in how I view it, I see it as different ways to look at something as if standing at opposite ends in a large room while shifting position. I’m always concerned about continually defining and forming visual language around my identity work and the live performances focusing on land and the environment connects to this work but in a more basic way. Some of the work I do around the experience of growing up in Hawai’i is intense and painful, in contrast to the light and playful nature of the participatory plant music-making but they both focus on how land, the natural environment, is viewed and interacted with on a basic level and the other more complex social-political view. I’m working on a few new projects that I hope will bring these concepts together in a way that can offer interaction and continue to question current social and political structures tied to plantation land ownership. 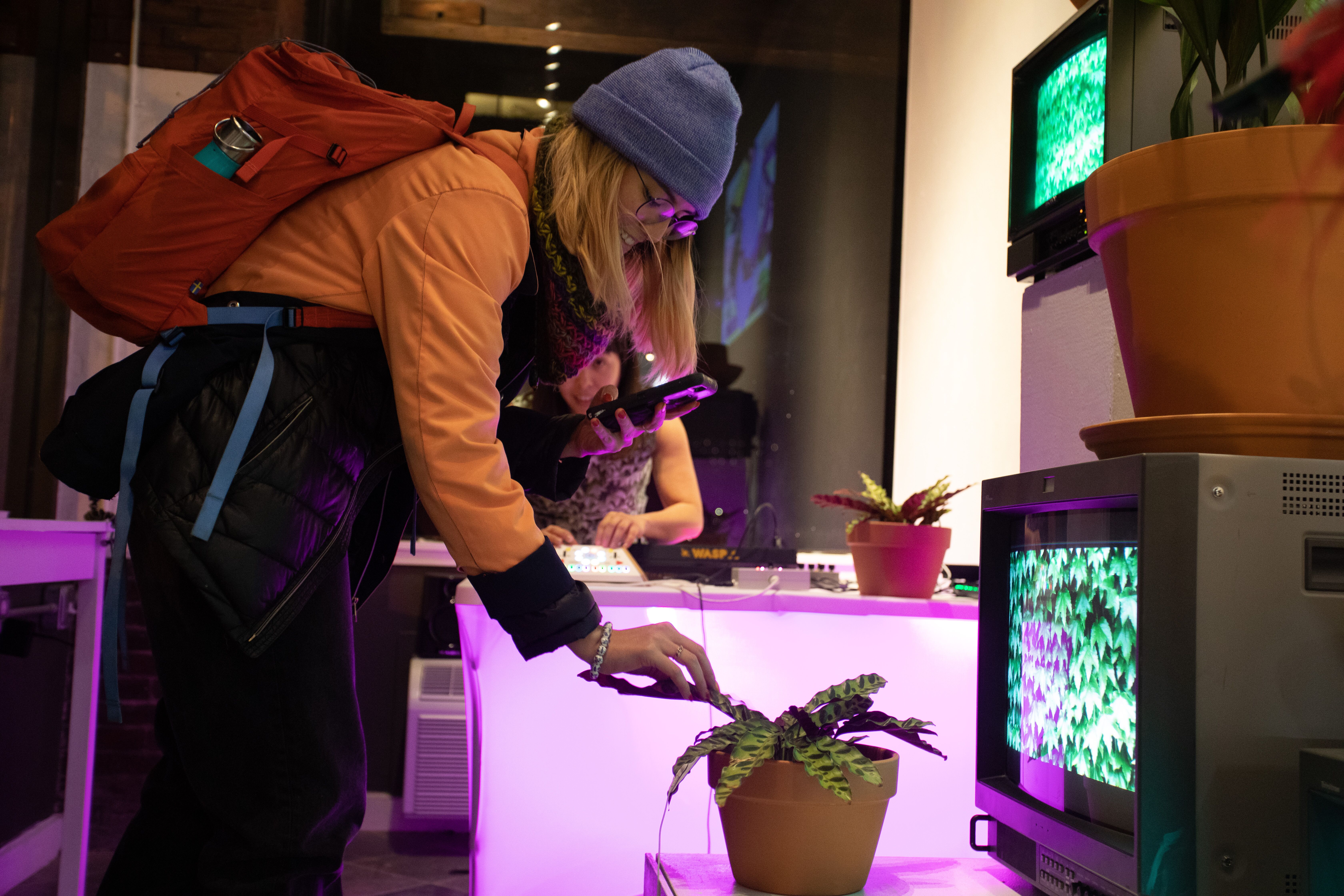 A visitor greets a plant. Image credit to Piotr Sapieżyński. 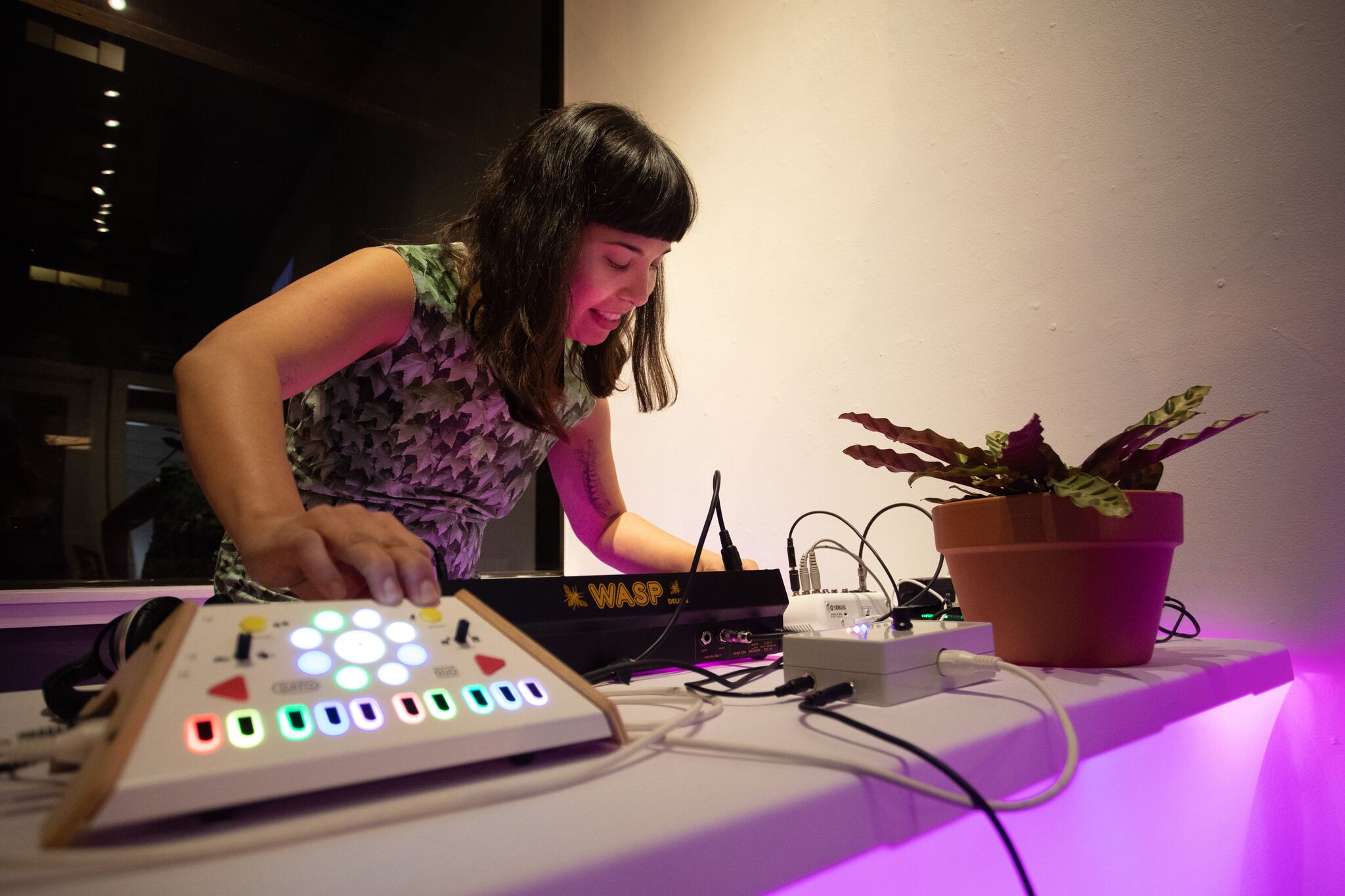 HUMAN GARDEN | Biosounds is on view through March 6th, 2020 at the Brookline Arts Center. More information on the exhibition can be found at https://brooklineartscenter.com/2020-exhibition-calendar/human-garden-biosounds/