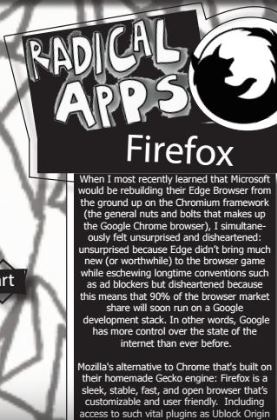 When I most recently learned that Microsoft would be rebuilding their Edge Browser from the ground up on the Chromium framework (the general nuts and bolts that makes up the Google Chrome browser), I simultaneously felt unsurprised and disheartened: unsurprised because Edge didn’t bring much new (or worthwhile) to the browser game while eschewing longtime conventions such as ad blockers but disheartened because this means that 90% of the browser market share will soon run on a Google development stack. In other words, Google has more control over the state of the internet than ever before.

Mozilla’s alternative to Chrome that’s built on their homemade Gecko engine: Firefox is a sleek, stable, fast, and open browser that’s customizable and user friendly.  Including access to such vital plugins as Ublock Origin and Privacy Badger (and NoScript if you’re really serious about tracking), Firefox offers plenty of control to the user. For those that are interested, there’s also a built-in content saving plugin called pocket that saves webpages for later even if offline!, add to that a simple syncing process between phones and PC’s and you’ve got a solid and well-rounded browser. If you want something even simpler: Mozilla recently created Firefox Focus, a streamlined privacy-oriented version of Firefox that automatically clears history and blocks ads and trackers. If you haven’t given Firefox a try, it’s faster than ever and a perfect replacement for Chrome (and won’t send what you do back to Google!).

Firefox is available on Linux, Windows, OSX, Android, and IOS.