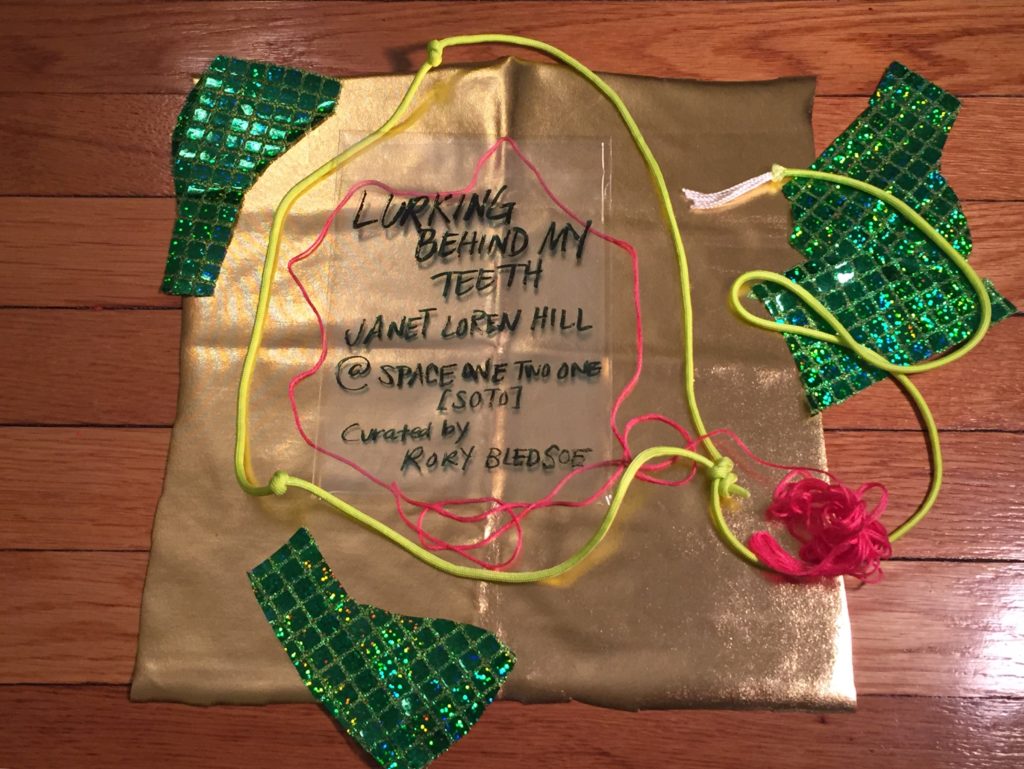 Navigation to Space One Two One [SOTO] takes an email or a FB message to a friend of a friend who might know the location of the gallery or in my case a direct message to the artist. The space is run by artist and curator Rory Bledsoe who invited Janet Loren Hill to fill her home, gallery space, with work that speaks to Rory’s desire to create a space that spotlights feminist, queer, and underrepresented local artists. 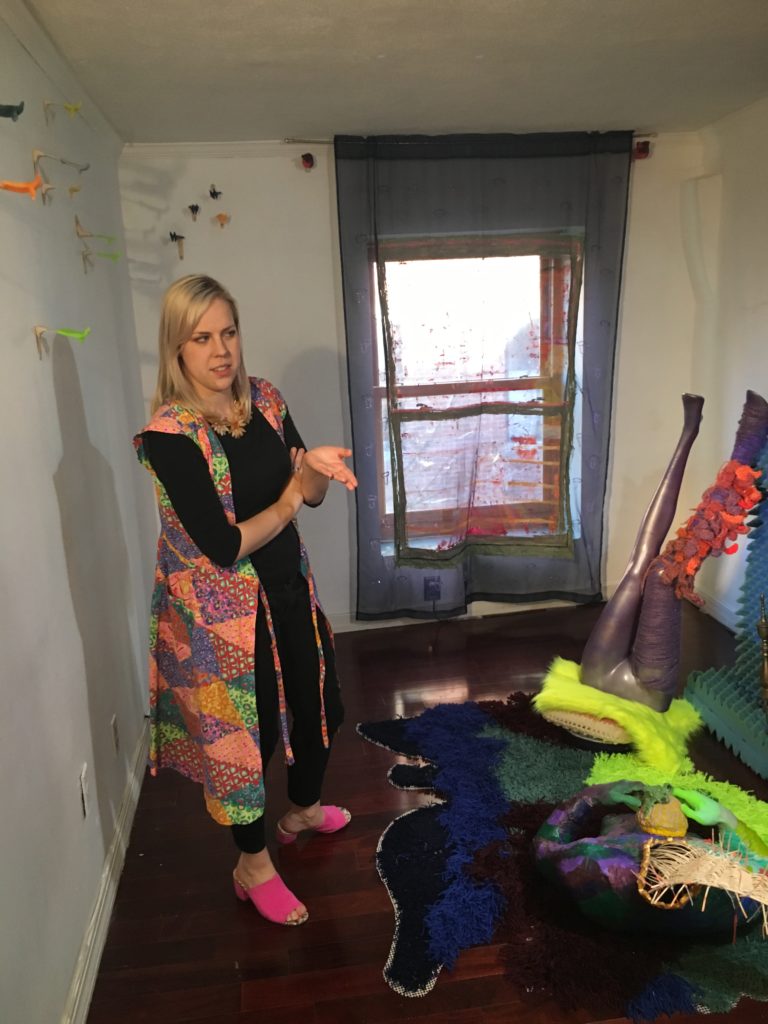 In my conversation with Janet she spoke to the connection and collaboration that developed between her and Rory and how this informed the development of her new body of work Lurking Behind My Teeth at SOTO, ‘we shared core feminist connections…and during my initial walk through of the gallery I was able to visualize how my work could have dialogues within specific areas throughout Rory’s home.’ 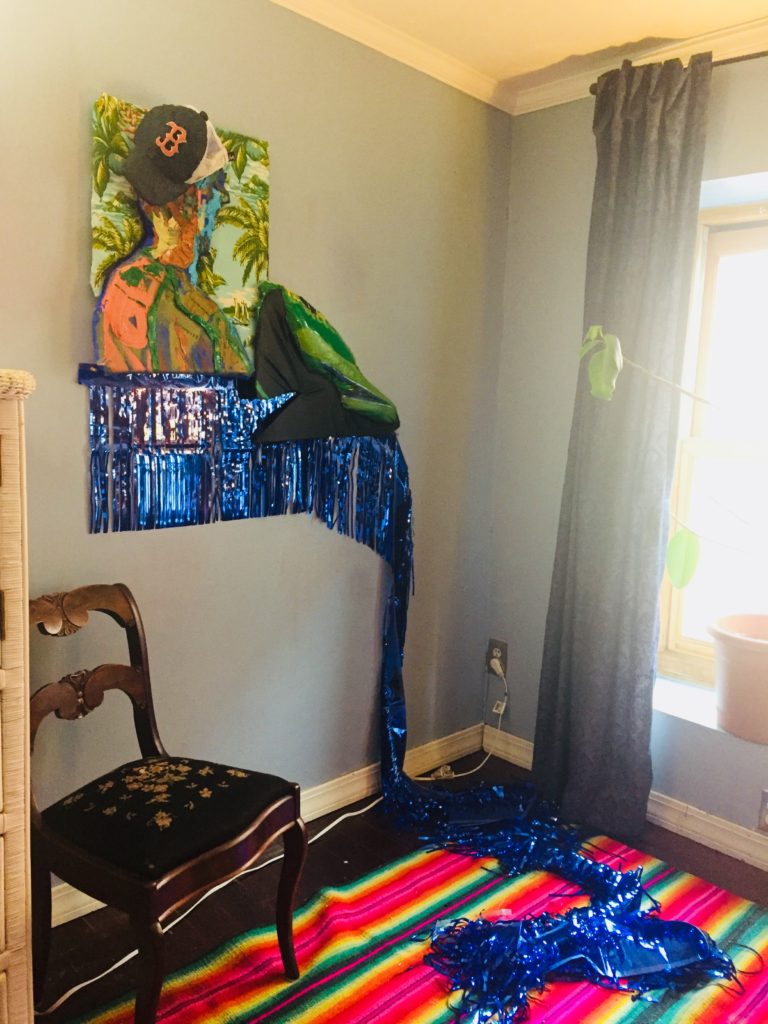 ‘He came at me with his jet ski, penetrating, but I wanted to see what was on that island on the horizon.’

There was a certain amount of trust and vulnerability the two shared in the process of conceptualizing the show, throughout the home Janet’s work occupied the living room, kitchen, bedroom, and bathroom creating a space for visitors to navigate and explore; making the private public in an intimate setting, the entire home was intentionally curated. 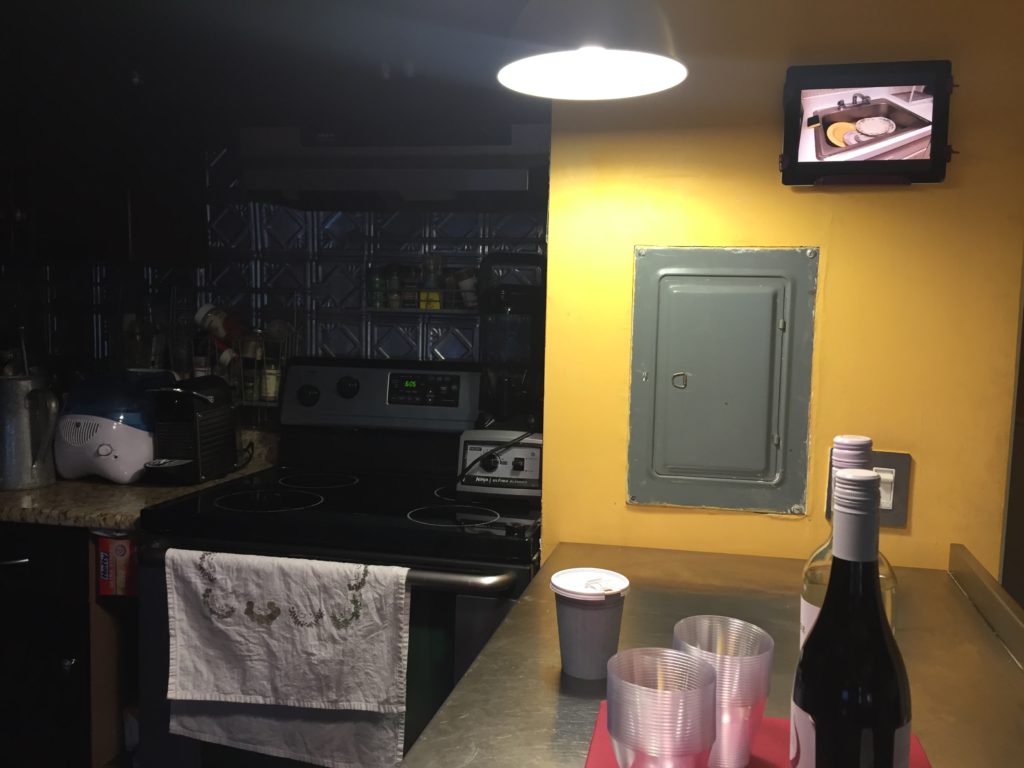 Rory had shared how she was concerned with the ‘feminist act of women taking up space,’ and how she felt Janet’s work does that. 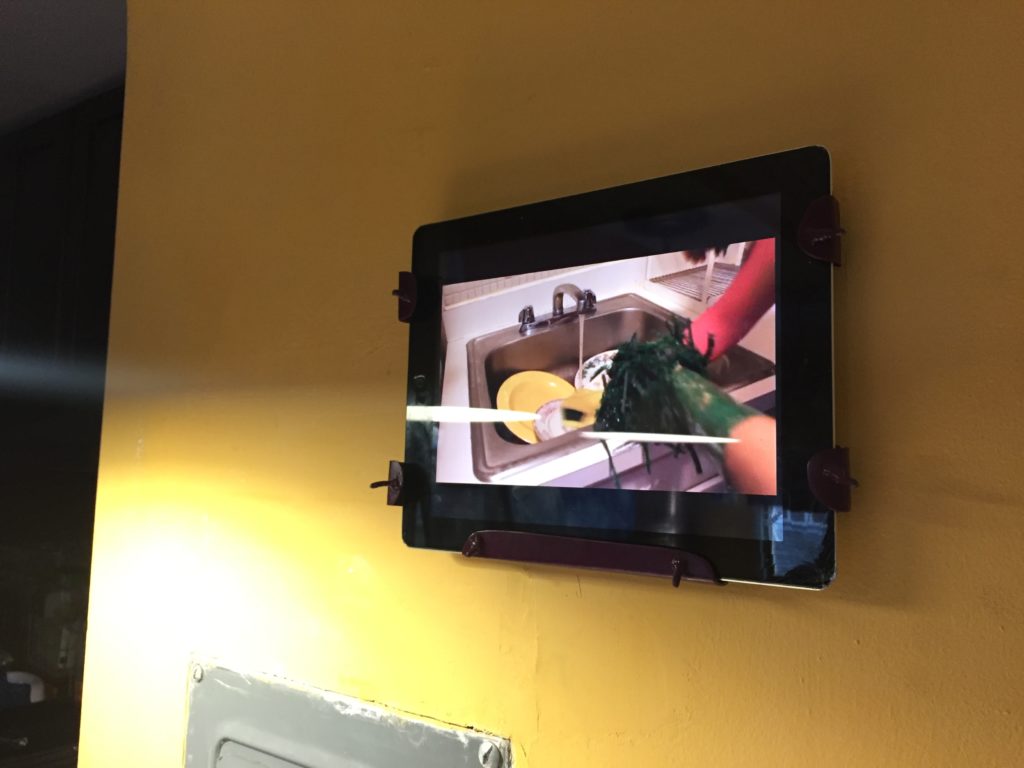 Janet’s work with bright painterly, shiny, and bold colors taking form in knitted textiles, cased forms, and kinetic sculptures draws the viewer into a world that is constructed from a history of both violence and domesticity by referencing Scold’s Bridle masks used in the 16 th – 17 th century as weapons to silence wives and women. In the living room is mask piece ‘Common Scold: Don’t confuse my admiration for an invitation’ and in the bathroom the grotesque piece ‘Common Scold: I think about him every time I pee’ references Trump and his administration and the daily horror every woman faces with him as president. 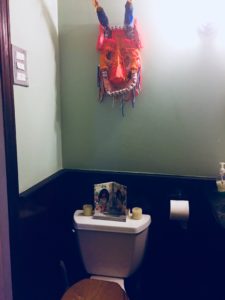 ‘Common Scold: I think about him every time I pee’ 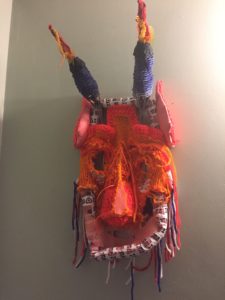 There is also the installation ‘When the night turns, meet me at the fireplace, lick the flame, burn your tongue, at least we stuck it out.’ In which Hill fills the main gallery space with a colorful array of male and female body halved body parts, the male with a large tongue, and the female with many; she explained how she hopes there is a dialogue between the two showing the balance of domestic life and how she is interested in confusing and queering the balance of the sexes. 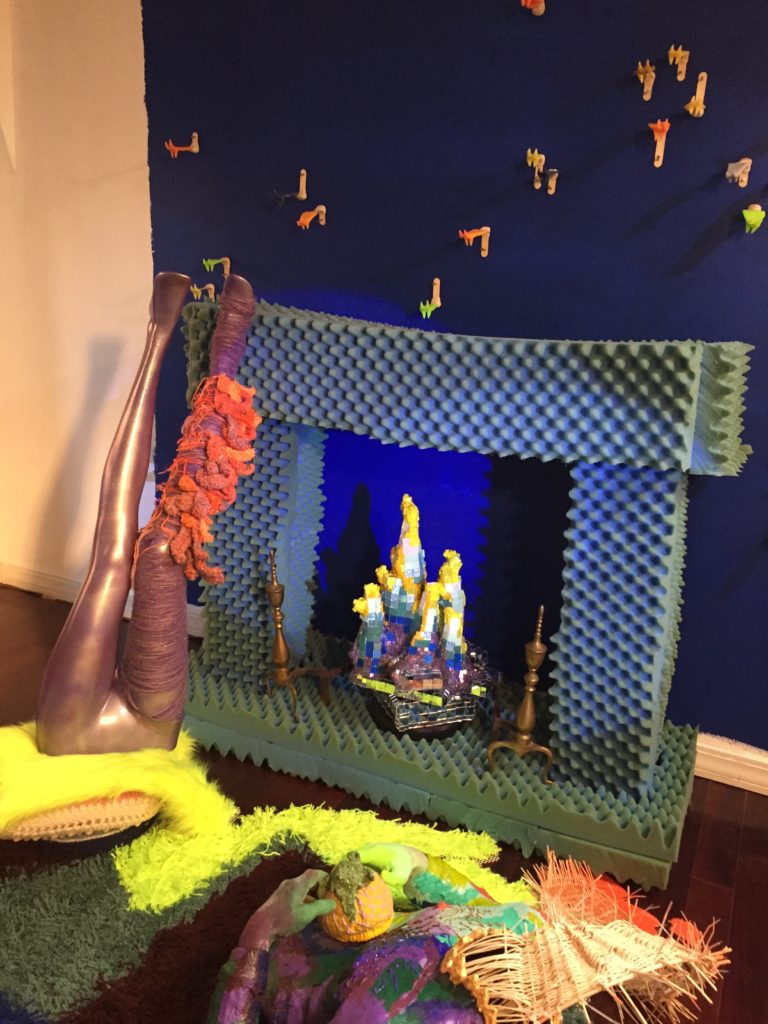 The tongue forms come from along the wall are cast from that reference the inner pieces of the Scold’s Bridle masks, lining the space with these aggressive silencers turning them into soft sculptures you want to touch but cannot; mimicking something like sensual toys. 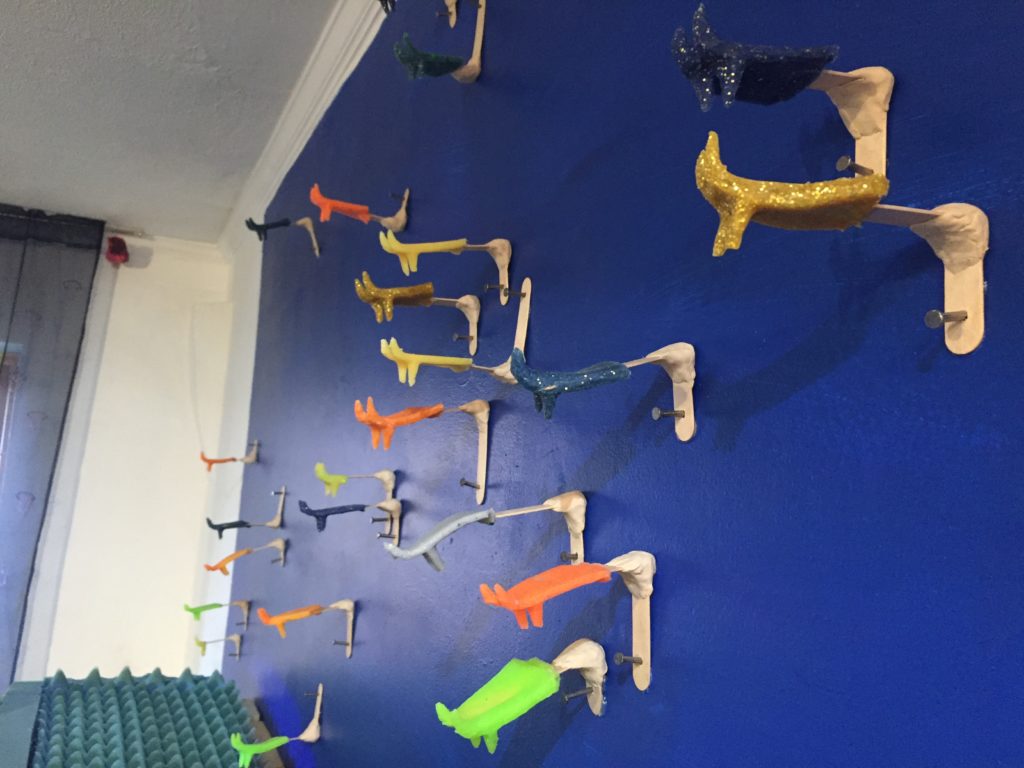 The room is tied together by the fireplace that centerpieces a rotating mosaic multi-colored disco ball like form that cascades speckles of lights that extends beyond the and behind the form that surrounds it and the boundaries of the blue square on the wall, much like how Janet’s work questions notions of gender, sexuality, and dominance of monogamous domesticity.