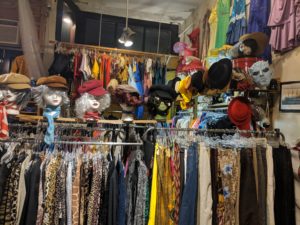 I’m not sure if you’ve encountered any of the turkeys that have been roaming around Boston this year, but they are quite enchanting. Much larger than you might imagine. There is one turkey in particular that hangs around Central Square in Cambridge. This turkey specifically hangs at the cross section of Auburn St. and River St. outside this funky corner store that has clothes just hanging off of it. There’s a funny little marquee that hangs over the stoop; it’s the bow of a steam ship that reads “Great Eastern Trading Co.” Inside this store you’ll meet a man, dressed to a T on any given day, named Nephtaliem McCrary, or Neph. You’ll probably meet a pretty cool intern too- for now let’s just call her Gabi. You’ll immediately be gripped by this warm fuzz and slammed with a sparkle in your eye. Greeted by Neph and Gabi, you’ve just entered some hip, funkadelic sacred pocket where the atmosphere feels in-tune. They call this fuzz pocket The Great Eastern Trading Co.

The place is filled with some of the most honest vintage clothing I have ever seen. An impressive, sophisticated collection of hats dazzle the shelves above racks that pack the store. Known for their intense collection of Hawaiian shirts and Western garb, The Great Eastern Trading Co. is loaded with gold shirts, vests, fur and faux fur coats, ’80s prom dresses, masks, and pretty much every style of clothing under the sun. I sat down with Neph to find out a bit more about the store and more about him.  The dude has DEPTH.

First thing you gotta know about Neph is this: Nephtaliem McCrary is a performer, specifically a singer. I saw him open up for Parliament/Funkadelic last winter at the House of Blues. When I saw him, he was groovin’ across the stage wearing these enormous white feathered wings. Honestly, if it weren’t for his outfit, I wouldn’t have remembered. But that’s the kind of fella Neph is: You remember him. He has a unique style in every breath he takes.

He began his story explaining that he was an avid customer who would shop here all the time and would drop $400-500 in a visit. He loved this place and spent enough time around it to build a kind relationship with the owner, Marlene. She had somewhat inherited the once Army/Navy surplus store in 1973 with 5 other friends. Eventually, one by one they would split off and move on to the next chapter of their lives. It wasn’t until the early 198os when Marlene Clauss became the sole owner of The Great Eastern.

The original owner had a passion for Naval fixin’s and named the place after an enormous iron steamship called the SS Great Eastern. After a brief history lesson with Neph and some scrolling through Britannica.org, I learned that The Great Eastern was a British ship once considered to be the prototype of the modern ocean liner. Designed by Isambard Kingdom Brunel (who is a dead-ass doppelgänger of Alec Baldwin and John Scott Russell), the ship was built to carry cargo and passengers between England and India. It was the largest ship in the world at the time of its launch in 1858. 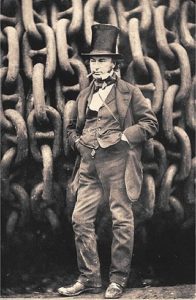 One day, Neph was shopping around when he overheard Marlene talking with someone about how she was getting ready to sell the business. All the folks interested in buying just didn’t have the right vibe, and Marlene didn’t want to sell this place to someone who would change it from what it was. The second you walk into the Great Eastern Trading Co. you feel something. You immediately feel the soul, the spirit, the energy of life that was weaved in between these threads. So after Neph overheard Marlene, he asked her a bit more about what was going on and how she was looking to sell to the right fit. Neph was getting ready to head out the door. With a weighted conscious (yet still as cool as Brando), he turned around and asked, “Hey Marlene, How much does this place go for anyway?”

Neph left the store that night with a boiling percolator in his head. He was thinking, “Damn, another one bites the dust. All these stores are expiring and evaporating, developers are coming in everywhere and are building these super condominiums that have Starbucks and gyms and grocery stores in them. These places are packed with all your amenities in one building, and soon nobody will ever have a reason to go outside.” When Neph was describing all this to me all I could think about was “Don’t Worry About the Government” By The Talking Heads. This building has every convenience/It’s going to make life easy for me.

In the end, Neph had some money saved up from all of his previous gigs and it only took him one night to think it over. In his words, he was pulled to the helm of the ship.

I asked Neph more about his role and a bit about his favorite pieces. He said growing up he followed the trends of the times, had his jamz in the 80s, and then went towards the silky R&B style of the 90s until he turned to the raver scene. It wasn’t until the Millennium when he dove into Jimi Hendrix, Sly and The Family Stone, and Parliament/Funkadelic and started to feel a deep connection to that culture and style.

“Hendrix and those cats were always pushing boundaries on color, fabrics, and patterns.  It didn’t matter if the clothes were made for them or not.” Neph began shopping in the women’s aisle of consignment shops and other vintage clothing stores, experimenting with different combinations that worked for him. “That’s the thing about these clothes.  These clothes were made new at one point and were bought new and worn new at one point in time, and gained all these experiences and literally became the shell for someone at a certain point.” He continued to explain that these clothes eventually got put in storage somewhere, lying dormant for such a long time. For him, being able to liberate the time capsules inside them, so that someone else could patch their own experiences in these threads, is just a part of the human experience.  It’s how we all, as humans, can connect with one another. It’s more than just a shirt, a pair of pants or a coat.  It has a spirit, a soul, a life! 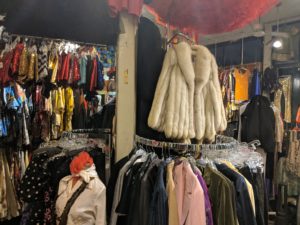 Along with the funky inspiration from Hendrix and the Family Stone, Neph takes great inspiration from his hero, Bobby Garnett. “Bobby Garnett, this is the cat that started it all. He is a legend in the vintage industry.  He was one of the first ones to actually travel overseas and pick up all this hip garb and bring it back. He originally had a store somewhere in South Boston called Bobby from Boston.” Throughout 1969-1980 Bobby opened up vintage stores all over Boston and even in Provincetown, Cape Cod. Sure there were Goodwills and consignment shops, but Bobby was one of the first to cultivate a culture in vintage. Bobby From Boston is currently located at a warehouse space in Lynn.

Neph is always changing style, as does his store. They have more ugly Christmas sweaters than you could ever possibly imagine. They have more ugly Christmas sweaters than Snapchat has filters.  THEY GOT YA UGLY SWEATAHS. He was telling me that, historically, The Great Eastern Trading Co. is a Halloween hub. For the whole month of October, this joint puts a mask on, lights up, and twists 180 degrees.

Neph has become a specialist in creative costuming. He gave me an example: “So say two customers walk in and are thinking of doing a hero/villain theme. Someone walks in dressed in jeans and a white tank top-going for a Die Hard route. So we have John McClain, well I need to dress this other cat like the infamous Hans Gruber. So I go digging around for that slick European Style suit. And so I work with them seeing what works best, try out a few combinations, and not only do people walk out of here with the costume they came in looking for, but they walk out of here with a real, honest piece of vintage clothing.  And they walk out of here in style.” 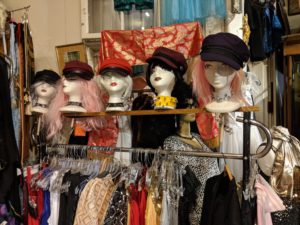 Neph’s mission is when a customer walks in is to help them reinvent themselves and adopt their own style.  To him, we are all unique, and we are what we wear.  When we dress well we feel good and, if you find a style that feels like you, it will lift your spirit. It will make your day better. According to Neph, “[Personal style] inspires creativity and expressiveness.” When you walk into The Great Eastern Trading Company, you feel the life and the warmth of thousands of spirits, and the soul of culture from all around the world. Neph travels as far as Cuba and Italy to bring back clothes for the store for us. The Great Eastern Trading Co. will 100% make your day better. If you’re ever feeling down, or are trying to somehow evade the winter blues, check it out. It’s a magical experience.  You don’t forget a store like this once you’ve been inside. Make it a point to go check this place out in support of Neph and his local business, because it’s the one of the coolest, brightest lights in this weird, dark world.

The Great Eastern Trading Co. is located at 49 River St. Cambridge, MA 02138 just around the block from the Central Square Red Line Stop.  You can shop online shop online on their Etsy page, follow them on their two Instagram pages, like them on Facebook, and DEFINITELY check out their website: www.greateasternvintage.com.

“I more or less just signed up for a Yelp account just to say how awesome The Great Eastern Trading Co. is.”-Anonymous Yelp Reviewer