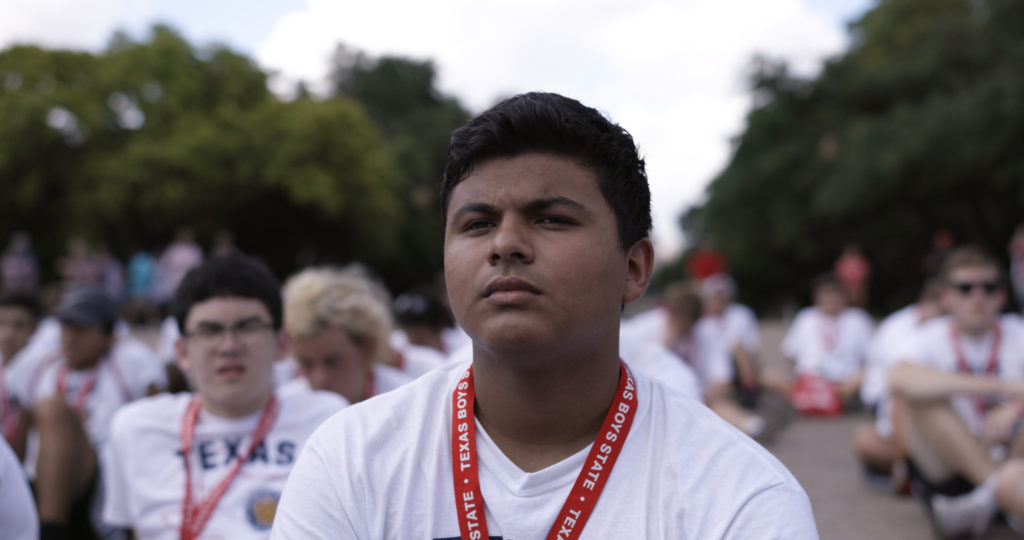 If I may put forth a contender for Understatement of the Year, American politics are in a strange place right now. Between the hyper-accelerated outrage cycle facilitated by social media, the chaos emanating from the current occupant of the Oval Office, and, you, know, the fact that civilization is literally collapsing around us, it can be difficult for any sane adult to get their bearings– much less young people, who have never known any other climate. But with Baby Boomers proving themselves unwilling to provide for anyone but themselves, Generation X living up to their reputation for sullen indifference, and Millennials in the midst of a generation-wide nervous breakdown, it has become apparent that, if salvation is ever going to come, it will come from the as-yet-unnamed Z generation, who are just now starting to reach voting age. So, are we doomed?

This is the question, more or less, posed by Boys State, the new documentary from filmmakers Jesse Moss and Amanda McBaine, which won the Grand Jury Prize at Sundance and will premiere this Friday on AppleTV+. In the summer of 2018, Moss and McBaine embedded themselves in the Texas chapter of Boys State, a yearly government simulation organized by the American Legion in which hundreds of high school boys in every state campaign for a variety of elected positions, following a handful of young men from across the political spectrum as they navigate their first political cycle. In advance of the film’s streaming debut, we spoke to Moss and McBaine about the state of American politics, the surprises of getting to know young people trying to make a difference, and how the youth of today might just be able to save all of our asses.

BOSTON HASSLE: How did this project come about?

JESSE MOSS: It was 2017, and we were really trying to make sense of the political situation in our country. The Trump election and just the rancor and paralysis in Washington were issues that we, like most Americans, were wrestling with. As filmmakers really not sure how to engage this question, but we read an article in the Washington Post about Texas Boys State voting to secede from the union that year. That was something of a mini-scandal, and I think an embarrassment to the American Legion. But at the same time, the vote was a real reflection of that rancor, that division. And as we read about the program, which we had only kind of vaguely known about, the realization that here was a space, in Texas, in which boys of different politics were actually getting together to talk to each other face to face. We were interested to see what that would be like, if we were to go down there and, through their experiences in this government simulation, kind of take the temperature of American democracy. And we were curious about the boys in 2018– would they heal those divisions, or would they split apart? And I think these were questions we were asking ourselves about our country as a whole. That was the opportunity– a sort of microcosmic look at the health of American democracy.

BH: Was there anything in particular you observed as to how today’s political climate might be affecting young people going into politics today?

AMANDA McBAINE: I think that there was a lot we expected going in, and then of course there’s a lot that we didn’t know to expect, and I think all of that is on display in the film. There’s dirty tricks, but there’s also politics with principle. There’s leaders who believe that you should serve others, not yourself. There’s impasse on certain issues, and then there’s compromise on certain issues. I think we knew it was going to be a fraught space– you know, putting together very right and very left folks at the same table. We knew that would be uncomfortable, but I think I hadn’t totally prepared for how much civil discourse was possible for seventeen-year-olds, let alone adults. And I think that was the real surprise for me: seeing, particularly, two of our characters not only navigating a predominantly conservative space as not conservative politicians, but also that they really came to power, and inspired a lot of kids to be their better selves.

BH: What were some challenges you found shooting? In a program of 1200 kids, how did you know who to follow and where to be at any given time?

JM: Well, the conception of the film was that we would find a handful of young men to follow. I think there was no other way for us as filmmakers to make sense of it. I think maybe Fred Wiseman would have done a different approach, that was more institutional and less character-based. But we were curious to see how a handful of young men would be tested and tried by this experience, and to what extent would it change them– if their politics were fixed or flexible. We had to find them, and we were dealing with a potential cast of a thousand, so that took a number of months of just criss-crossing the state of Texas, from dusty cow towns to big cities– looking for what, we weren’t sure. It became clear to us that we responded to young men who were politically sophisticated, who were ambitious, who were smart, complicated. We had to meet a lot of them to meet Ben and Steven and Robert. We met those three young men before the event started. And René we were fortunate to meet at Boys State when he gave that barn-burning speech that captured the Nationalist Party chairmanship. These guys were really our ways in. And they’re all different– Steven is of Mexican descent, René is African American, the other two are white. They come from different socio-economic backgrounds. They’re really different, and that was important to us. Boys State is predominantly white and conservative, and I think for us as a country now– this is not a new story, unfortunately, but people of color coming up against a political structure that has denied them a voice is the narrative to some extent that we saw at Boys State. I think that’s important. And how Steven and René navigate that space– as Amanda said, they come to power– and how difficult and how easy is that process. That’s a real strong mirror to our national politics, watching them as young men navigating those choices. And watching Robert and Ben make their own choices about how to conduct themselves as candidates and party chairmen in this electoral contest became a striking reflection on our national politics.

BH: Have you kept in touch with any of the kids since shooting?

AM: Oh, yeah. We kind of disappeared for a second there, because it took a year to edit the film. So you have this intense shooting experience, and then you disappear, and they became seniors in high school, and there’s a lot that goes on in their lives senior year. And then we come back a year later with a rough cut and share that with them, and that begins sort of the next chapter in our relationship with them that’s continued since last summer. They’re all now 19, going on 20, and they’ve evolved, they’ve grown up a bit, and they’re in college. They came to Sundance, where we premiered this film, and that was an extraordinary time with all of them, because they could see each other again. Steven brought his mom, and Ben brought his mom. And since then we’ve sort of been touring– not in real life, but on Zooms with them, doing Q&As for various showings of the film. It’s really one of the great privileges of this kind of work, that you get to continue a relationship with the people that you make your films with. I love watching them grow up. They’re really articulate, and always fun to listen to in these Q&As. They surprise me even still. Particularly Ben– he’s really had a long chapter of reflection since the film’s come out, not only because he’s older, but because politics have become more extreme, and I think he sees the downside now of win-at-all-costs style politics.

BH: As one last question, here at Boston Hassle a lot of our readers are younger and politically minded. Do you have any messages that you might have picked up while shooting that you’d want to give to young people thinking of going into politics?

JM: I think one of the ideas is a reminder to us, if we need reminding– I’m not sure the younger generation does– that democracy is not something that we should take for granted. That it’s health depends on our willingness to throw ourselves into the process, whether that is in the form of activism or politics. And I think we need both. I think that young people are leading political movements around the world, beyond simulations, and they’re proving themselves capable– and also necessary. I think there’s been a lot of abdication of adult political leadership, in Washington and beyond, and they’re not going to wait for us to solve their problems. They can’t. I think they need to work intergenerationally, but I think that they’re showing themselves to be remarkably capable in ways that we weren’t at that age. So that’s inspiring. I think, again, that activism isn’t enough, that we need to take control of the levers and pulleys of the political process, and understand how it works. I think the value of Boys State as a program, and Girls State too, is that it really kind of throws young people into that process and forces them to make moral decisions, to come to know themselves, and to help to find their voice. For someone like Steven I think that’s really helpful. It may be hard to find your voice in a protest movement on the streets, but maybe through a program like Boys State you can get boys to run for office, which people are doing now in their early twenties. It’s really inspiring.

Premieres Friday, 8/14 on AppleTV+ (watch this space for the Hassle review!)