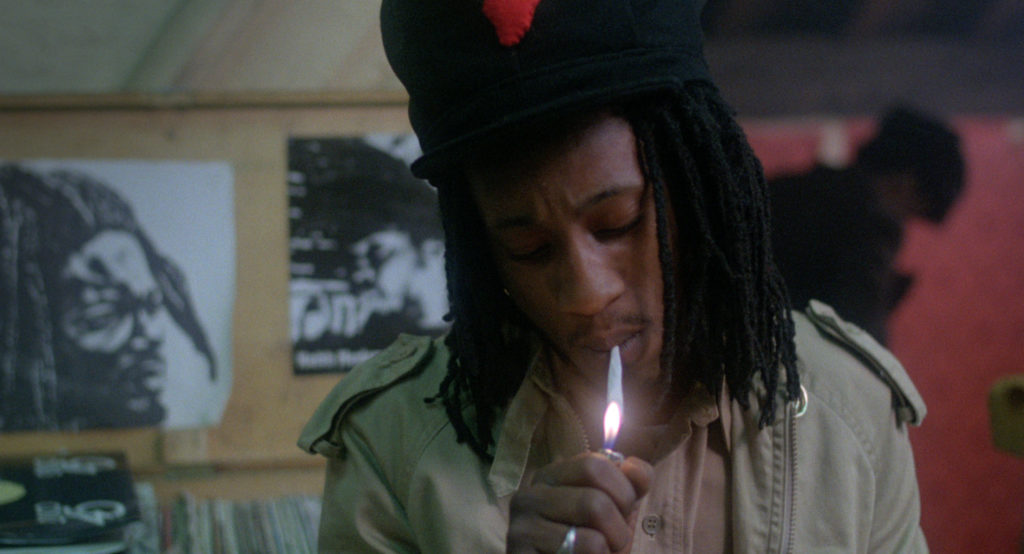 In a just world, anyone reading this would already be familiar with Babylon, Franco Rosso’s underseen 1980 cult film about London’s legendary late-’70s reggae sound system subculture. With its moving story, electric soundtrack, and depressingly-still-relevant commentary on racial relations, Babylon would be as widely revered as The Harder They Come, and would claim a rightful spot on any Hassle reader’s DVD shelf. Instead, the film somehow failed to find a contemporaneous distributor, dooming it stateside to the realm of urban myth and bootleg VHS tapes. Until now, that is; Kino Lorber and Seventy-Seven have released the film in a gorgeous digital restoration, which screens at the Museum of Fine Arts through the end of the month.

In casting its lead, Babylon could scarcely have done better. Best known as co-founder, lead singer, and guitarist for the legendary UK reggae group Aswad (who also provide several crucial tracks to the soundtrack), Brinsley Forde turns in a soulful performance as Blue, a young DJ trying to make it in postindustrial London. In anticipation of the film’s rerelease, we spoke to Forde about Babylon, his musical and acting careers, and the bridging of racial divides.

BOSTON HASSLE: You had a good deal of acting experience prior to Babylon, is that correct?

BRINSLEY FORDE: Yes, I had a fair amount of experience as a child actor. In England we had the Children’s Film Foundation. On Saturday mornings, kids went to the local cinema and watched films that were acted by children. They were made for children, with children playing the major roles. One of them was called Magnificent Six and 1/2, which was I think a twelve or thirteen part series, and was actually the forerunner to Double Deckers. Double Deckers was shown in America around the ‘70s. It was a joint production with 20th Century Fox, so we had things like Keds, and all this American gear. Basically, the story was seven kids that had a super hideout, and they got into trouble, like getting lost in a film studio, or making a pianola or a hovercraft, or having a go-kart take off. Other things I did were the TV adaptation of To Sir, with Love, and also Please Sir!, which was another series which was quite popular in England– I did the film of that. I did a John Boorman film, Leo the Last, that starred Marcello Mastroianni and Billie Whitelaw and Calvin Lockhart. I had a small part in Diamonds are Forever, the James Bond movie. There were other little things that I had done, but to remember them all right now…

BH: Were you already active as a musician as your acting career began, or did one sort of lead from the other?

BF: No, no. I mean, I started when I was sort of about eleven or twelve– I was acting quite young. I always loved music. Obviously, the music that I was really drawn to was early reggae music. Then it was either ska, or bluebeat, or rocksteady. I went on to start playing with Junior English in a band, so I started recording, and I kept on acting. I think what happened, it came to a point where I had to decide what I was going to do. Between that time, I met up with Bob Marley and the Wailers. They came to England to support Johnny Nash and the Sons of Jungle, but they had a problem with their work permits, so they stayed maybe 200 yards from where I was living, and I took my equipment over there. So I had a lot of experience playing with Jamaican musicians that were first class–Family Man, and then Carlton Barrett. So yeah, music came probably after– well, it’s wrong to say that, because the woman who actually got me the auditions did several shows with young children for cancer research and things like that. So I had sung in quite a few of her shows. So yeah, music and acting have always just been the things that I was drawn to.

BH: How did you come to be involved with Babylon?

BF: By that time, the band that I had started, Aswad, was a well known band,  and they would have known of my acting experience. And at that time, I mean, there were very few known black actors in the UK. I have kind of said at times, I was probably the first young black person, or black face on British TV. So, they would have known– Double Deckers was shown in the ‘70s. So I got a phone call saying that they would like to speak to me, and the rest is history.

BH: One of the things I was struck by watching the film was how naturalistic it felt. Were any of the characters’ stories sort of shaped by the actors’ experiences at all? Was there any improvisation?

BF: I think there was a lot of what you just said. This was the first opportunity that young black actors probably had the opportunity to be able to create the characters. They knew the life. They lived the life. Or they had seen characters that they could make an improvisation of. So, yes, this was one of the joys of doing Babylon. It was an actor’s dream. And I have to say that the director was very open, and allowed us the respect of knowing how these things were. For instance, Karl Howman, who played my good friend Ronnie in the movie, while reading through–there’s a scene which would have been filmed at the end of the film, where the police come in with dogs, and he was absolutely– he just said, “No! That would never happen! The police would never come into a place with dogs!” Obviously we found documentaries and footage that showed that it did happen. But it was just to say that, unless you were of that ethnic community, and of that time, you wouldn’t know what was happening. And I think that’s what’s happened now in America, forty years on, that people can identify with the movie, that they couldn’t identify with in the ‘80s. 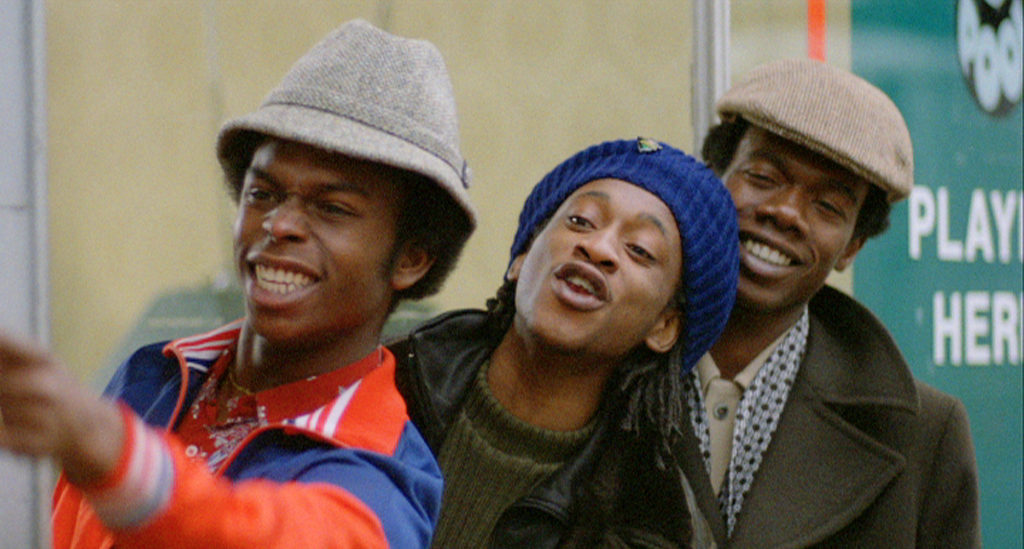 BH: Sort of building from that, how accurate do you think the film is as sort of a snapshot of that whole scene at that time?

BF: I think it rings true to a lot of people. A lot of people who see it say it does feel like someone’s just taken a snapshot of that time. I think basically the story– there’s some part of the story that people can identify with, whatever color they are. You know what I mean? A guy breaks up with his girlfriend, things are getting different, problems at home. I think that the film, most people watching it can identify with a part of it.

BH: Despite all of its acclaim, it seems strange to me that it never got released over here in America until just this year. Was there any particular reason for that?

BF: Well, it was funny. At the premiere at BAM in Brooklyn, I was approached by a middle-aged white lady, and she said to me, “It was the stabbing.” And I said, “But why?” I mean, you have death depicted in movies, and murder depicted in movies, and whatever, in so many different films– war films, you name it. And she said, “No, it’s the underdog .” And I never even thought about that until she said that to me. And I think that was the situation, that basically it was a movie that showed the underdog fighting back, and it was deemed that it wasn’t good for the American public. And that’s the only thing that I can think of.

BF: It makes you think, doesn’t it?

BH: As one last question, is there anything that you hope modern audiences take away from it, given the chance to see it for the first time?

BF: What strikes me, obviously in America, seeing it again, and speaking we did at the Q&A, is that nothing really has changed. You know? I mean, in the early ‘80s, many of the ethnic minority– I know two friends that were in Aswad– you could be in the middle of the West End, and a policeman could pick you up because he suspected that you were about to do something. Your girlfriend could be shopping, and the guys standing on the street laughing and joking, and they could be picked up and taken to prison, because the police officers suspected them of doing something. So, I believe that, if you have a situation where you have an officer of the law who has a stereotypical image of a group of people– you know, in America you have Black Lives Matter, OK? It’s the same thing. We have the whole situation of the racism in England, they’re going through this whole situation where the leader’s probably going to have to go, because when they were given the vote, they probably didn’t vote on the problems facing them, they voted on immigration. And this time it wasn’t necessarily black and white, it was probably the Eastern Europeans that are coming in and taking the jobs and stuff in England, that they were really fighting against. So, things may have changed in the identities, but these things are still going on. So I think that America can identify with it, because, you know, you look– you don’t even have to look hard enough, it’s there on the surface. These problems still persist, and still remain. So one thing I love is the fact that it’s opening conversation. It’s making people talk about these things.