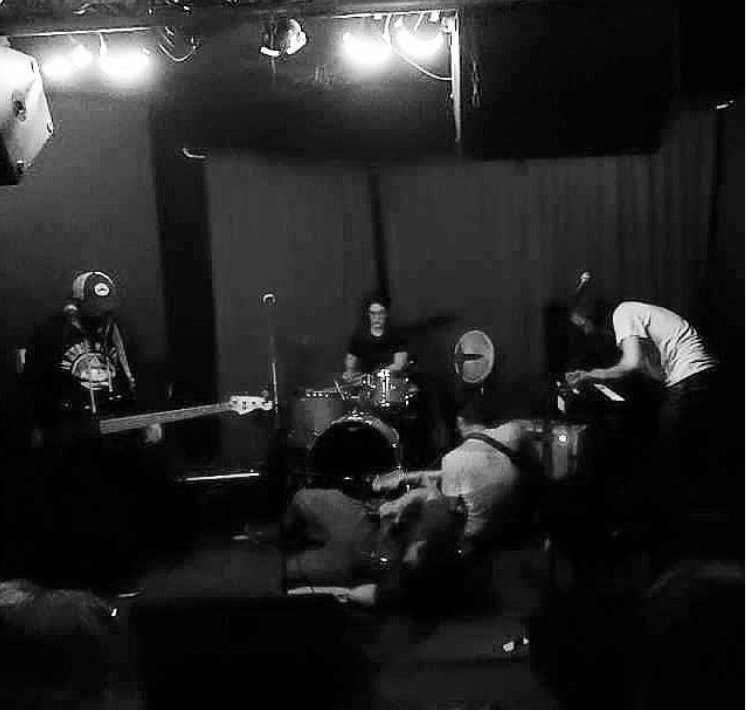 I recently had the chance to speak to Jim Warren of the Lowell based acid psych noise monsters Inspector 34 via carrier pigeon, smoke signals, and semaphore.

HASSLE:
Who is in the band and what do they do in the group?

HASSLE:
How did the band start? Where did the name come from?

JIM:
It originally started as my solo project, and really just an excuse for me to learn to play all the instruments and try out home recording techniques. The first “album” (which hopefully no one will ever have to hear again) was recorded mostly in my freshman dorm room – it started with a sample from the “Inspector 34” episode of The Adventures of Pete and Pete, which didn’t make sense contextually unless I named the project Inspector 34, so I did. Eventually I started playing live, acoustic versions of the songs, and after years of playing and recording by myself (and a couple abortive attempts at creating a full-band lineup) someone hit me up to play a show and asked if I could do it with a band. I grabbed whichever of my friends were available for that date and were down to learn the songs, thinking it would be just a one-off performance – and 4 or so years later, here we are as a real, consistent band! Almost by accident, it’s the best group of people I could’ve hoped to start a band with.

HASSLE:
Very cool! What has the band been up to during the pandemic?

JIM:
In a way nothing, in another way quite a bit. Extremely luckily, we finished the recording sessions for our new album the week before the pandemic really hit and everything locked down, so I spent the first couple months mixing it obsessively, with help from Silas who also mastered it. So we were able to get the album (Love My Life, which we’re very proud of and hope everyone checks out and is also available on vinyl) finished and released. But all 5 of us have only been together in the same place one time since March – for a ONCE virtual venue show which we recorded outside, socially distantly, in Alex’s backyard in June. We really miss each other and playing music together. We’ve all been keeping ourselves busy with various other projects and things, and creating music for our Patreon page as well. Can’t wait to get back to doing it together though.All of our projects, and many others, are included on a Sad Milk Collective compilation we released on Jan 1st. You can stream it or buy a CD and all our patreon subscribers get a copy of the CD for free.

HASSLE:
Do you have any tour plans or releases when and if the pandemic lifts?

JIM:
We’ve been coming up with ideas for the next album as best we can, and we hope to tour again when it’s safe to, but since the future’s looking pretty uncertain all around we haven’t made any concrete plans to do so yet. We had to release our album with relatively little fanfare in December – our first real show back might be a “belated album release.”

BOSTON HASSLE:
I hope that day comes soon! What does everyone do besides the band?

JIM:
When he’s not soldering together gear for himself and the band, Pat plays drums in the goregrind band THEFUCKINGCOPS, who just released a split with Anomia. He also has three solo projects – lofi hiphop beats as Chillhaze (released 2 albums during the pandemic), ambient/drone/noise as BGDRGS (also 2 releases in the past year), and Dungeonsynth as Cryptic Witchcraft. Silas is the go-to mastering engineer for many of the Sad Milk Collective artists, and produces ice hot synth pop as his alter ego Fomosurfer, who just released an album this month. He is also one half of Pleasure Center, who have an album coming this year, as well as a frequent musical collaborator of Alex’s Triple Yeah Productions. In addition to being a visual artist (who painted the backgrounds for our recent music video) Alex creates comedy and musical content with herself and her many puppet pals as Triple Yeah Productions. She is also a part of the team behind Boston’s favorite Weird Local Film Fest, who have been putting on virtual shows since the pandemic started and will be back in force once gatherings are allowed. I play drums in the band Squash, who have an album coming out this year and released a live album in October. I’ve also been doing a lot of animation work in quarantine, and animated the music video for our song The Gray House. All of us are members of the Sad Milk Collective, which is a nebulous sort of DIY arts collective that sometimes functions as a record label for our projects when we need it to. We started a Patreon page where we release music (solo tracks, collaborations and live recordings) that isn’t available anywhere else – the money we raise on patreon helps us cover the costs of releasing our music and art to the world.

HASSLE:
What are some primary or secondary influences on the band?

JIM:
As I’m the main songwriter, our sound generally falls under the experimental-lofi-indie-rock umbrella – but the beauty of this group of people is that everyone has pretty varied influences that inform what they do with our songs. I asked everyone in the band and combined all of their answers into one big list: doom metal, shoegaze, 2nd wave black metal, twinkly emo/screamo, dad rock, vaporwave, hypnagogic pop, post hardcore, punk, pop punk, jam bands, psychedelic, 60s rock. This all on top of my experimental-lofi-indie-rock song skeletons.

HASSLE:
Ok you touched on this a little but tell me about the song writing process for the band.

JIM:
Originally, it was just everyone learning parts to songs I had already written, since I used to record all the instruments myself. Since we congealed as a real band, very rarely I’ll come to the group with a song fully written but usually I’ll bring a riff or two and we’ll stitch songs together as a group. Once in a while I’ll have very specific things in mind for some instruments but most of the time we just start with my guitar parts and everyone just builds on that.

HASSLE:
Thanks so much . There is plenty for people to check out!

Liked it? Take a second to support Eric Baylies on Patreon!