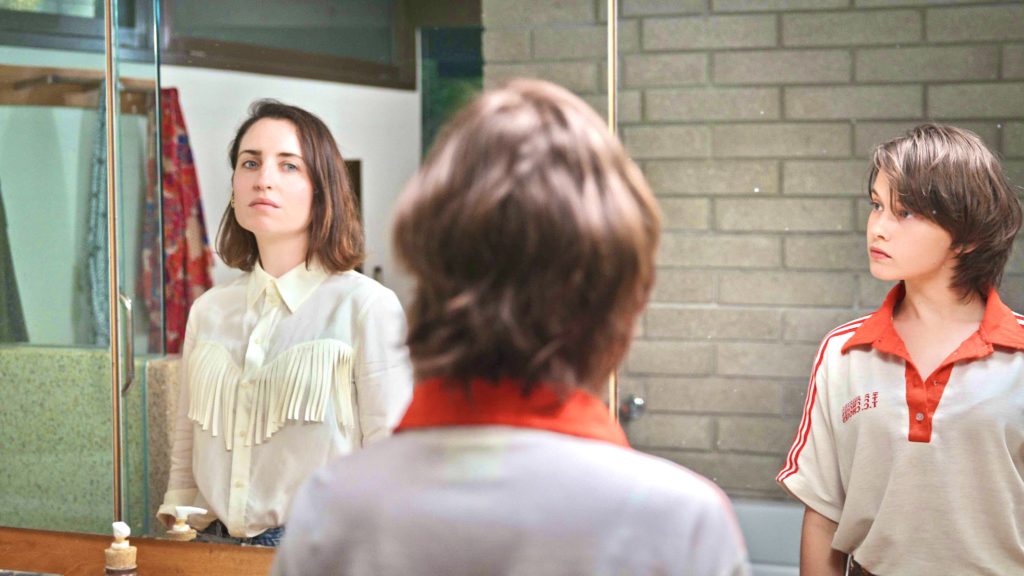 It has become apparent that we are squarely within the reign of what will hopefully prove to be a short-lived subgenre: the non-COVID COVID film. This is a distinct category from the COVID film– movies like Host or Locked Down, which explicitly center their narrative on the pandemic in an attempt to capture this moment of profound global weirdness on film. Rather, the non-COVID COVID film tackles the subject obliquely. Though shot in the midst of the lockdown, these films instead communicate the anxieties of the day metaphorically: the cloistered domestic drama of Malcolm and Marie, the creeping existential dread of In the Earth, the desperate escapism of Let Them All Talk. Future generations might not recognize these films for what they are, but will likely be able to spot them through telltale signifiers: small casts, scenes shot outdoors with actors separated by a six-foot-plus buffer, and a deep, underlying sense of angst and ennui.

The latest entry in the non-COVID COVID canon is Zoe Lister-Jones’ How It Ends, the closing night selection for this year’s pandemically-altered IFFBoston. Like other films created under similar circumstances, it’s clear that Lister-Jones is wrestling with many of the same issues a lot of us have been for the past year-or-so, and, like those films, How It Ends is often raw to the point of being messy. However, unlike many of its stablemates, Lister-Jones’ film is bright, fizzy, and ultimately life-affirming.

Lister-Jones stars as Liza, a geriatric millennial slacker who has put off dealing with her emotional baggage until the last possible moment. This is not hyperbole: a meteor is hurtling toward earth, and, if predictions are accurate, this will be everyone’s last day alive. Accompanied by the metaphysical realization of her younger self (Cailee Spaeny), who under the circumstances has been rendered visible to the world at large, Liza sets out to achieve closure on her strained relationships with her parents (Bradley Whitford and Helen Hunt), her estranged best friend (Olivia Wilde), and her least favorite ex (Lamorne Morris), before making her way to a friend’s bitchin’ end-of-the-world party to make up with the one who got away (Logan Marshall-Green). Things go awry, however, when Liza finds that her car has been stolen, leading her on a meandering odyssey of oddball characters and as she hoofs it back and forth across pre-apocalyptic LA.

Unlike such end-of-the-world comedies as This Is the End, How It Ends rarely feels particularly apocalyptic: apart from the fiery plume slowly getting larger on the horizon, it’s actually a lovely day. Likewise, we don’t see any of the looting throngs one generally expects with the territory. Instead, each character we meet appears to be experiencing their own, personal apocalypse– and most of them seem surprisingly okay with it. Each person Liza meets seems to take the end of the world as an excuse for a “me day.” Some, like Nick Kroll’s tent-dwelling hermit or Whitney Cummings’ ever-so-connected party girl, are committed to going out in a drug-induced haze. Others take the opportunity to live out lifelong fantasies, like a schoolteacher (Ayo Edebiri) doing her first-ever stand-up set on a street corner, or a folk singer (real life musician Sharon Van Etten) reviving a duet she penned with a late partner. With the exception of one clear COVID-denier stand-in played by Rob Huebel (“You think NASA is real?!”), everyone seems to have plowed through their various stages of grief and settled firmly on acceptance, and while all seem to be in the middle of some manner of freak-out, most of them are in a basically good place.

In case it’s not clear by now, How It Ends is whimsical to the point of borderline-twee, and if you’re not constitutionally disposed to its brand of self-reflective pep it will likely play like nails on a chalkboard. I’m generally not, as a rule, and in its early minutes I found myself wondering if I hadn’t made a grave tactical error. Yet How It Ends grew on me, and once I surrendered to its lighter-than-air sensibility I found myself charmed by it. Like many films shot in the COVID era, there’s a sense that it was made on a lark; one can imagine Lister-Jones thumbing through her rolodex and writing scenes and asking some famous, funny friends if they want to take an afternoon to do a scene. Many of the scenes don’t contribute much to the larger story, but it’s not really about the story. Like these characters, all you can do is find joy and zen in the moment.

Yet I was also sucked in by the emotional arc between Liza and her younger self. As the elder Liza, Lister-Jones embodies a familiar sort of contemporary thirtysomething ennui, stunted by self-doubt and social media-fueled second-guessing, while Spaeny serves as a sort of ever-enthusiastic external id. It’s the sort of self-insertion writer-director-star role that can become unbearable, but thankfully Lister-Jones recognizes her character’s fundamental absurdity, and invites us to laugh at her avatar’s perpetual mopiness. And yet, crucially, her character’s struggles are also quite relatable. We all would like to think we’d spend our last day on earth with a no-fucks-given blowout, but chances are we, too, would spend much of our time fretting and setting out on fools’ errands.

Is How It Ends a great movie? Probably not; indeed, with its skit-like structure and incongruously low-stakes narrative, there are some who might argue that it’s barely even a movie. But taken right now, in this moment, there’s something refreshing about it. Like many non-COVID COVID movies, the miracle is that it got made at all, and if you can view it as a sort of all-star home movie it’s a perfectly pleasant way to spend 82 minutes. Will it cross my mind until the inevitable “Films of COVID” retrospectives in 2030? I doubt it. But it does manage to make apocalyptic soul-searching feel somehow joyous, and for that, I’ll take it.

Closing night selection of the 2021 Independent Film Festival Boston – Click here for the rest of our coverage!