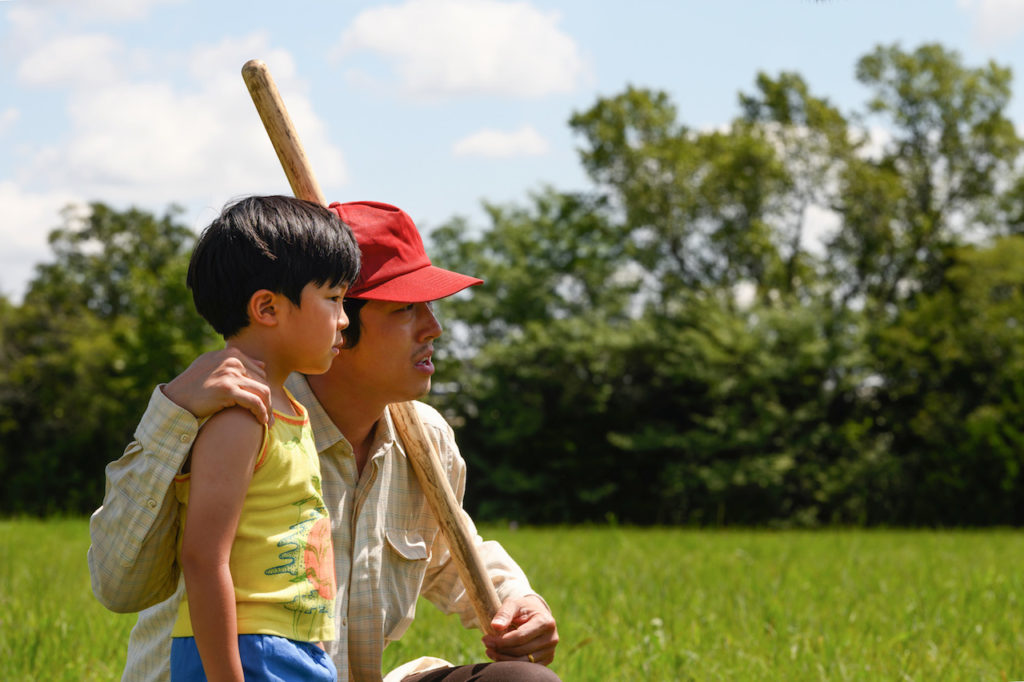 (L-R) Alan Kim, Steven YeunPhoto by Melissa LukenbaughCourtesy of A24

This is a weird time to watch a movie about the American dream. 2020 has been a rough year everywhere, but especially here, and as of this writing we are days away from what is either the end or (god forbid) the halfway point in one of the most brutish and ugly chapters in our country’s history. In a time when simple acts like going to the movies or eating in a restaurant feel far out of reach, stories about struggling Americans can feel exhausting, while tales of high hopes and big rewards can feel unattainable to the point of cruelty. Yet Minari, the new film by Lee Isaac Chung (Munyurangabo) comes through like a breath of fresh air. While the family at its center endures more than their share of hardship,the vision it presents of America is a hopeful, if complicated, one.

Set in the 1980s and based on Chung’s real-life childhood, Minari tells the story of the Yi family, first-generation Korean immigrants looking to start a new life. Following a brief stint in California, father Jacob (Steven Yuen) pulls up stakes and transplants his family to an undeveloped tract of farmland in rural Arkansas– much to the chagrin of his wife, Monica (Yeri Han), to whom this plan appears to be news right up until she first lays eyes on her new trailer home. Jacob’s plan is to provide for his children, Anne (Noel Kate Cho) and David (eight-year-old, impossibly adorable Alan Kim), by becoming the heartland’s premiere supplier of authentic Korean produce. To help with the kids– as well as assuage Monica’s understandable anxiety– they invite Monica’s mother, Soonja (Korean acting legend Yuh-Jung Youn), to live with them. David who has never met his grandmother, is skeptical (“Real grandmothers bake cookies! Real grandmothers don’t swear!”), as is Monica of her husband’s farming abilities and business acumen. Yet life, as always, finds a way, and we soon find ourselves drawn into this lovely little family farm.

Simply put, Minari is a beautiful film, in every sense of the word. This is clearly a very personal story for Chung, and he lingers on his setting with the love of someone recreating a long-lost home. When Jacob tends to his crops or Soonja takes David walking down to the river, the camera glides rapturously through the gorgeous scenery, allowing us to all but bask in the warm Arkansas sun (the mood is enhanced by the lush soundtrack from Emile Mosseri, of Kajillionaire and The Last Black Man in San Francisco, here mixing sweeping strings with warm, warbly synths). Yet Chung also finds beauty in the mundane. The Yis’ trailer is about as picturesque as you’d expect– it’s the ‘80s, so think wood paneling and cheap carpeting– but Chung and cinematographer Lachlan Milne instill it with the austere warmth of a pioneer homestead. In his post-film Q&A with IFFBoston program director Nancy Campbell and Kim’s Convenience star Paul Sun-Hyung Lee, Chung revealed that members of the cast and crew were invited to contribute their own childhood memories to the set– a grocery here, a piece of furniture there– to more fully evoke the quintessential Gen-X Korean-American upbringing. As Monica repeatedly stresses, their living space is tiny for a family of five, but you can’t argue that it isn’t home.

But the beauty of Minari goes far beyond the aesthetics. We spend just under two hours with the Yis, but by the end one feels like they’ve known them for years. Each character is fully and lovingly realized, from the irascible dynamo Soonja to the sullen almost-teen Anne. The Yis are almost constantly squabbling about one thing or another, but the love and the bond they share is palpable. It’s simply a pleasure to watch characters who so clearly care about each other, even if they’re often loathe to show it. There aren’t too many big, soppy, emotional hug-outs in Minari, but there don’t need to be. The proof is in their actions.

Much of this is thanks to the outstanding ensemble. Perhaps inevitably, Kim steals much of the show with his simple, guileless performance; in just about every scene he’s in, David runs away with your emotions, whether due to Kim’s sad, soulful eyes or his beaming, infectious smile. But the entire cast is firing on all cylinders. Han sells Monica’s (entirely understandable) exasperation with her husband’s stubborn impulsiveness, and Cho does an awful lot with little dialogue as young Anne, a sweet, responsible girl with just the right amount of budding preteen sullenness. Youn is a delight as the children’s eccentric grandmother, teaching the kids to play cards and animatedly watching professional wrestling on TV. But the soul of the film belongs to Yuen. Yuen’s Jacob is a powerfully complicated character, driven by a desire to make something of himself and unwilling– or unable– to admit that he may be in over his head. Jacob is ultimately a kind, likable character– the film wouldn’t work nearly as well if he was a tyrant–but Monica can hardly be blamed for her exasperation. Shortly before the film played Fall Focus, A24 announced that they would be running Yuen for consideration for Best Actor at the Oscars, which, if successful, would make him the first-ever Asian American nominee in that category. This fact is, of course, disgusting on its face, but it’s also a pity in that it may overshadow the performance itself, which needs no qualifiers to place it among the best of the year.

There is another fascinating element to Minari, which I couldn’t quite put my finger on until Lee brought it up in the Q&A. The Yis’ story is marked by outsider-dom, but their experience as portrayed in the film is notably free from racial prejudice. To help on the farm, Jacob employs Paul (a scene-stealing Will Patton), an unkempt, eccentric local Pentacostal who speaks in tongues and drags an enormous wooden cross down the backroads every Sunday; in a different film, Paul might be portrayed as an insidious influence, but here he ultimately becomes a loyal family friend, even developing a taste for Monica’s kimchi at their weekly dinners. Likewise, when the family begins attending the local church, the children weather some appalling questions from their white playmates, but these clearly come from a place of ignorance rather than hatred, and subside once the kids get to know each other. As Chung explained in the Q&AS, his intent was not to deny the experience of systemic racism, but rather to not let it define the story of his characters. At this moment in time, this feels like a tremendous kindness– to them and to us.

At risk of understatement, these are stressful days, when each of us carries in our pocket a bringer of endless bad news and promises of certain doom. I don’t think I realized how badly I needed a film like Minari until I sat down to watch it. This is not a stress-free film– things don’t always go right for the Yis, and the sadder scenes are nothing short of heartbreaking– but it is an extraordinarily kind and generous one. It doesn’t sugarcoat how tough life in America can be, but it does provide a reminder that family, community, and compassion can get you through an awful lot.