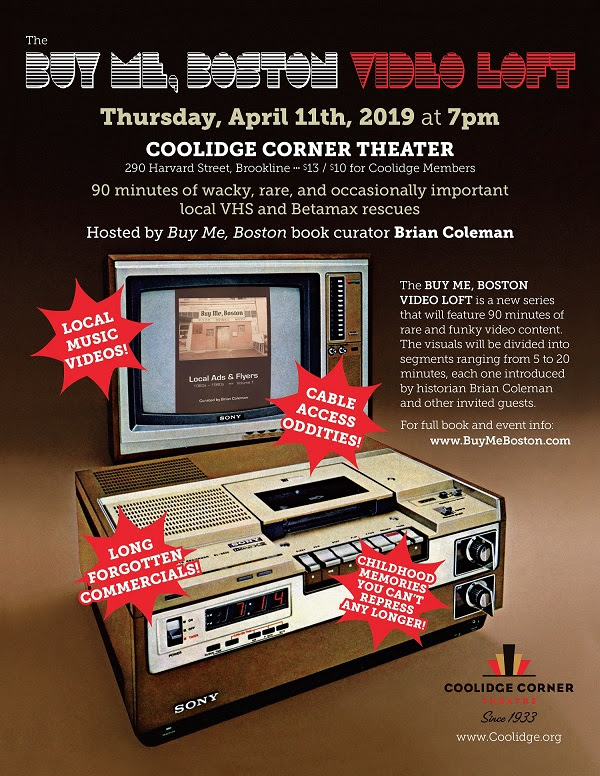 It’s an old cliche that every city has its own unique character, but Boston is, in itself, a character— the kind of local fixture who’ll sit at the end of the bar and tell one hilarious story after another, then maybe go throw a chair at someone for looking at them funny. Anyone who’s spent a few years here (or at least fallen down the rabbit hole of Dirty Old Boston) knows what I’m talking about: smart but scruffy, talented but with a chip on its shoulder, The Real Kids and The Friends of Eddie Coyle. What’s more, Boston has essentially developed its own bubble of distinct but insular pop cultural touchstones, unknown outside of New England, but beloved by townies, scene lifers, and anyone who knows what a Jordan Marsh was.

Fortunately, journalist Brian Coleman has taken it upon himself to chronicle the visual record of this scrappy, vibrant alternate history. His 2018 book Buy Me, Boston is a virtual treasure trove of visual ephemera, ranging from print ads from independent newspapers to hand-drawn flyers for the Rat. This Thursday at the Coolidge, Coleman will present a unique video counterpart to his book. The Buy Me, Boston Video Loft is a curated smorgasbord of local TV, musical performances, and other astounding oddities from Beantown’s past. In anticipation of the event, we spoke with Coleman about the project’s origins, the art of collecting, and the kiddie show that warped your parents’ brains. Brian Coleman, with a replica of the sign from the legendary Rathskeller, at Providence’s POP Emporium

BOSTON HASSLE: How did Buy Me, Boston originate as a project?

BRIAN COLEMAN: The seeds of the book (which came out in the fall of 2018), started about two years back, when I was diving into the personal archives of two amazing friends of mine – Kay Bourne and David Bieber. Kay was the Arts Editor at the Bay State Banner for decades, and her archives are now officially at Emerson College. But at the time they hadn’t been sent over there yet, and I was helping her organize them for the Emerson donation. Along the way I was amazed at what was in there, and would scan items from her files, as well as old magazines and newspapers she had.

Then, during the same time period, I was spending time at David Bieber’s Archives, which are in Norwood, MA. They aren’t public, but they also aren’t locked behind gates as they would be at a University archive, and David is always open to letting people who want to do good and interesting work have access. So I began going through dozens of old publications, like The Avatar, Boston After Dark, The Boston Phoenix, Boston Rock, and many more.

At some point it dawned on me that it would be both challenging and interesting to make my own visual trip through Boston in the latter part of the 20th Century, and I have always loved looking at advertisements. Plus I have done books before, but never one about Boston, so that had always been a goal of mine. Somewhere along the line the idea about telling a story through the ads clicked, and I got to work. The actual scanning and putting the book together (with my trusty designer, James Blackwell) took about 9 months, I suppose, when you really tally it up.

BH: What led you from printed ads and flyers to the video equivalent?

BC: The video part of all of this started at my book launch last November at the Brattle Theatre in Harvard Square. I hate doing typical book events, and I would never do a “reading,” so it dawned on me that it would be pretty cool to have some of the trappings of a book event – showing slides from different pages, and also a panel talk with some Boston historians (David Bieber, Paul “Blowfish” Lovell from Boston Groupie News, musician and educator Prince Charles Alexander, and historian and journalist Dart Adams) – but also blowing it out and showing some videos that would make sense. Visuals that would really bring that era to life, with motion and sound. So I played a bunch of video clips, including a Kiss 108 party from 1984, and Mission of Burma footage from their final show (well, at the time) at the Bradford Hotel in 1983.

For whatever way I look at the world, it just struck me as the right thing to do. And people really seemed to enjoy it. So that got me on this whole different branch of the “Buy Me, Boston” tree. I plan on including everything in the mix moving forward, and I plan on having this Coolidge Corner Theatre jam merely be the first video-centric event. I want to do several a year, with new footage each time so that people can keep coming back and getting new stuff.

It’s a pretty basic concept, though – you can watch videos on YouTube all day on your smartphone, but that’s bullshit. Seeing it on the big screen is a whole different experience. Excerpt from BUY ME, BOSTON

BH: Where do you find these videos?

BC: The one place I *don’t* take them from is YouTube. I might see something first there, but I always try and track down the source for the videos I show. That’s not always possible, but I have no plans to just grab YouTube footage. That’s lazy.

I basically find these videos the same way I find records and newspapers and magazines and anything else I collect – I dig, I trade, I ask people to borrow their stuff. I’ve been collecting for a while (records, mostly) and I have a pretty wide network of amazing people, and a lot of them keep their stuff. I’m very fortunate to have that network, because otherwise this would all be a lot harder. And a lot more expensive…

BC: Honestly, most of what I come upon is pretty mind-blowing to me. And some of the crazier stuff isn’t anything I would talk about in public, because I want people to show up and be surprised.

But here’s one for ya: I have a bunch of Major Mudd footage from the late ‘60s and early ‘70s that I obtained in the past couple of months. Anyone under 45 probably wouldn’t know who that is, but it was a prototypical Pee Wee’s Playhouse type of after-school show that ran in Boston. Back then there were, of course, less than 10 total channels to watch, so if you were in elementary school, that’s probably what you watched every day. And even if you didn’t watch it, I think younger people can be entertained and appreciate how low-budget and fun it was.

I have hours of that footage, but with Video Loft I won’t play more than 20 minutes of anything, to keep things moving.

I have so much more, but my lips are sealed! People will just have to keep an eye out and come to future events.

BH: What’s next for Buy Me, Boston?

BC: I already have enough pages scanned to do three more volumes of the book, so I’ll definitely do another one of those by next year, maybe even later this year. And I am planning on continuing with the Video Loft this year and beyond.

There’s so much still to collect and share, it’s honestly never ending. And I love that.