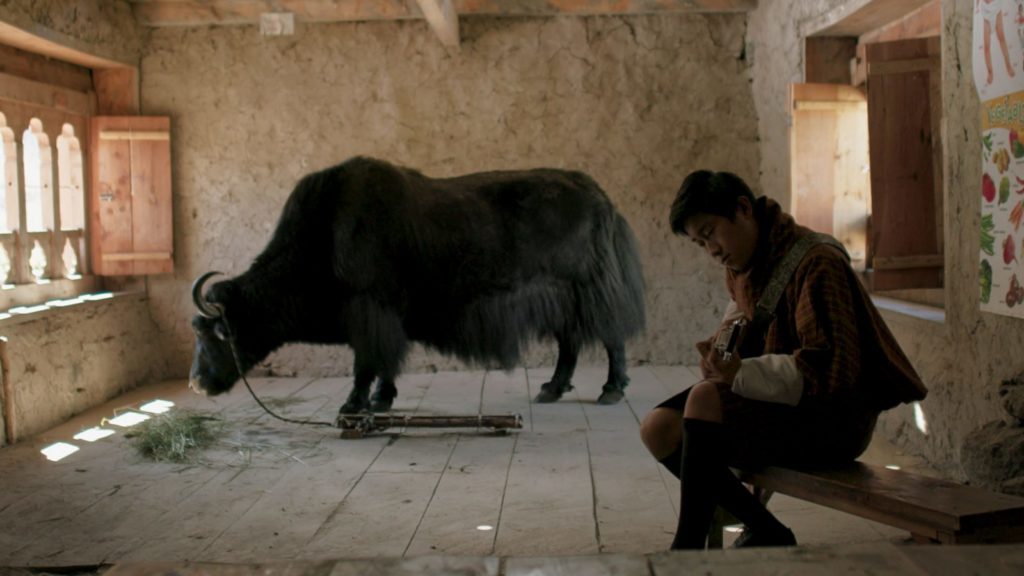 LUNANA: A YAK IN THE CLASSROOM (2019) dir. Pawo Choyning Dorji

As much as it wearies me to type these words, we are now entering the second festival season of the pandemic. At press time, things are looking up– shots are finding their ways into arms, and the prospect of sitting in a theater doesn’t quite seem like the science-fictional prospect it did even a few months ago– but we’ve still probably got a ways to go before we can all comfortably wedge in beside each other for hours on end in a stuffy movie theater. Fortunately, the “virtual film festival” model has by now become streamlined enough that exhibitors have gotten it down to a science. Following the success of their virtual Family Film Festival earlier this year, Belmont World Film is now taking their annual International Film Series online. A two-month program of foreign-language films from around the world, the International Film Series is a beloved tradition for local cinephiles looking to expand their horizons. In advance of this year’s series (which kicks off today with the acclaimed Bhutanese film Lunana: A Yak in the Classroom, and unveils a new title once a week through May 10), we spoke to Belmont World Film executive director Ellen Gitelman about the value of the festival experience even in times of lockdown, and the ever-increasing need to take in stories from other cultures.

BOSTON HASSLE: This is Belmont World Film’s second virtual festival of the year. What lessons from that experience have you taken with you into this festival?

ELLEN GITELMAN: First and foremost, I learned that people were hungry for something new and different that they couldn’t find on most streaming platforms, such as Netflix and Amazon. They were looking for films that took them places that they couldn’t travel to themselves at this time, with stories about life during normal times, even if they were about difficult subjects. And they were looking for a way to connect with people, even if it was only on Zoom. Based on the success of the Family Festival, we decided that it could also work for our International Film Series. Of course, I also learned how to set up a film festival on a virtual platform, which helped flatten my learning curve the second time around.

BH: For this festival, you’re taking a unique approach, with one film “screening” per week over the course of two months. How did you come up with this model?

EG: We call it an International Film Series because it features the streaming of one film per week, rather than programming a bunch of films all at once in a short time period. It’s been this way since we started, although there were a few years when we showed two films per week, two nights in a row! Besides showing films that aren’t being shown anywhere else, our model calls for a more interactive discussion of the issues presented in the films we show. While we are happy to have directors engage with audience members, we also look for speakers who are knowledgeable about the culture or subjects presented in the film, who can facilitate more of a give and take approach with the audience. Our audience members tend to be people interested in cultural exchange, and they are more interested in gaining understanding, rather than asking about the film’s budget or the kind of camera that was used. That doesn’t mean they aren’t interested in the artistic side of film, but it’s a secondary consideration.

When we held the series in person, our screenings usually took place on Mondays with the discussions immediately following. This year, all but one film will be available for streaming for one week, starting on Tuesdays at 12:01 AM until the following Mondays at 9:00 PM (A Son will only be available from April 2-5). In a nod to our traditional Monday in-person screening nights, the Q&As with the directors and moderated discussions will take place on Monday evenings at 7:30 PM.

BH: What can you tell me about some of the films screening in the series?

EG: This year’s International Film Series is called “Family Ties,” because each film is about an unconventional family configuration. Of the eight featured films, three are their countries’ submissions for the Best International Feature Film Oscar. Previous Oscar nominee Agnieszka Holland directs Charlatan, based on the true story of an extraordinary natural healer and his same-sex love caught in the crosshairs of the former Czechoslavakia’s totalitarian regime in the 1950s (it was also shortlisted for the Oscar nomination, although it didn’t make the cut). Lunana, A Yak in the Classroom is by first-time director Pawo Choyning Dorji from Bhutan, who will join us for a Q&A from Taiwan on Monday, March 22, at 7:30 PM. It’s about an aspiring singer who lives with his grandmother in the capital of Bhutan and dreams of getting a visa to relocate to Australia, but first must serve at the most remote school in the world, located in a glacial Himalayan village. Sun Children, by Iranian director Majid Majidi (whose Children of Heaven was the first Iranian film to be nominated for an Academy Award), is another in a series of his films about forced child labor in Iran and Afghanistan.

There are three intriguing French films as well. Portrait of a Lady on Fire star Noemie Merlant turns in another remarkable performance as Benjamin, a transitioning trans man in A Good Man. To escape the pressures of being trans on the mainland, he and his partner (played by French chanteuse and actress Soko) move to an island off the coast of Brittany and eventually decide to have a baby together. It’s a really interesting film with lots to discuss. Fans of the French Netflix series Call My Agent will recognize Camille Cottin (who plays Andrea in the series) in The Dazzled, but her character couldn’t be more different. In the film, which is based on the director’s own experience growing up in a community that espoused sharing and solidarity, she plays a mother who falls under the spell of a religious cult. Jean-Pierre Darroussin also has a small part in the film, but plays a much bigger role in director Robert Guédiguian’s Gloria Mundi. Guédiguian regularly works with the same cast in each of his films, including his wife, Ariane Ascaride, and Anaïs Demoustier, in addition to Darrousin. The film is a heartfelt family drama about surviving in today’s gig economy, set in Marseille.

The other two films include: A Son, a story set during Tunisia’s Jasmine Revolution, which portrays a modern, liberal, and upper middle-class family whose weekend in the country’s southern region reveals a surprising predicament; and the closing film, Agosto, about a Cuban teenager–the primary caretaker for his beloved grandmother–who develops his first crush during the summer of 1994, when many fled by boat to the US to escape the country’s food and supply shortages. Both films were scheduled for last year’s series, which was, of course, canceled just two days before it was supposed to start.

BH: While I imagine most of these films were completed prior to the situation we’re currently in, are there any themes you can see running through the selections that speak to the state of the world today?

EG: The films don’t necessarily speak to the state of the world per se, but family has come to be defined in more ways than one during the pandemic. People have been getting together in pods and becoming like family, in lieu of being able to see their own extended families. Several of the films this year feature characters with unique family structures, having created their sense of family in nontraditional ways. Most importantly: nearly half the films are based on true stories, including Charlatan, A Good Man, and The Dazzled.

BH: Do you have any future events in the works, virtual or otherwise?

EG: Yes, we do as a matter of fact! This will be the fourth year that we are observing World Refugee Month in June. We will screen two or three films–both narrative films and documentaries–featuring stories about refugees in different parts of the world. It will be held virtually again, so that those who have not been vaccinated will not be left out. One of the films we will screen is called Antigone by Sophie Deraspe, who’s based in Montreal. We know that at least one filmmaker will participate in a virtual Q&A, and we are hoping that the others will follow. I can’t say much more than that yet.