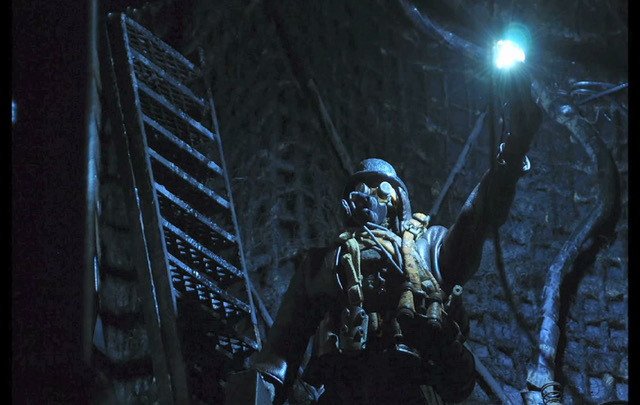 Of all the genres of film, few are rarer than the independent animated feature. There are, of course, reasons for this; animation is an incredibly time-consuming and costly process, and next to impossible without a massive team effort. When we think of the classics of animated film, we generally think of the major houses– Disney, Ghibli, Pixar– because those are the companies that can afford to employ a small army to bring their visions to dazzling life. Of course, there have been a handful of wild renegades over the years to bring their uncompromised visions to the screen, from Bill Plympton and Don Hertzfeldt all the way back to Lotte Reiniger. Watching these animators’ films can be a dizzying experience. We are so used to the look and feel of studio animation that work emanating from outside that sphere can feel like a glimpse into an alternate dimension.

This feels literally true of Mad God, the long-gestating passion project from legendary animator and special effects genius Phil Tippett. Mad God feels like a film out of time (which it sort of is– more on that later), a fascinatingly weird work which is by turns breathtaking, disturbing, confusing, and hilarious. Whether you’re enthralled or repulsed by it, it’s a safe bet that it is unlike anything you’ve seen before.

With the exception of a written opening crawl– a hysterically draconian decree presumably written by the Mad God itself– Mad God is entirely wordless, letting its creatures and spectacle speak for themselves. We are literally dropped into its subterranean world, following an unnamed, gas-masked assassin as he descends via diving bell into what can only be described as a nightmarish world of shit. Garbage is piled as far as the eye can see, fires burn unchecked, and the blood of faceless workers literally oil the gears of giant machines cranking out barrel after barrel of god knows what. We never get a full picture of what exactly is going on down here, apart from the fact that it’s obviously horrible, and that our silent guide has been sent on some sort of mission to take it down. But we soon realize that some systems are too monstrous to be fully torn down– and that some “heroes” aren’t built to last. 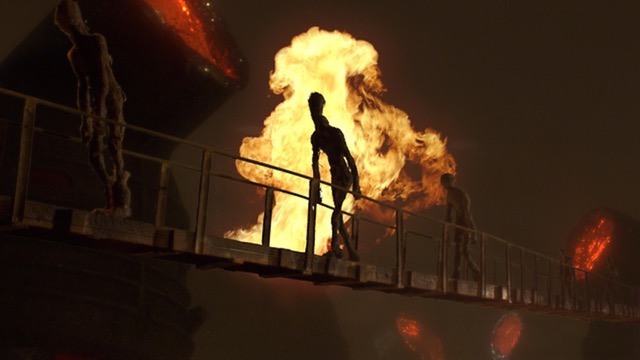 Tippett is a legend in the worlds of special effects and stop-motion animation: he’s won two Oscars (for Return of the Jedi and Jurassic Park), and he has contributed unforgettable creatures and sequences for such films as RoboCop, Starship Troopers, and Indiana Jones and the Temple of Doom. But while he’s been involved with some of the most successful mainstream blockbusters of all time, there has always been a subversive streak running through his work: consider the grotesque creatures fighting it out on the chessboard in the original Star Wars, or the morbidly hilarious ED-209 scenes in RoboCop. Star Wars power-producer Kathleen Kennedy has been quoted as saying, “Phil brings humanity and empathy to every character he creates,” and that is certainly on display here.

In Mad God, we get our purest look yet at the wild imagination which powers these endlessly inventive visuals. Nearly every frame is crammed with enough unique ideas to fill an entire conventional genre film. Tippett sneaks in visual Easter eggs paying homage to his influences: I spotted Robbie the Robot, Alfred E. Neuman, and a number of creations from stop-motion godhead Ray Harryhausen among the rubble, and a sequence of faceless workers filing into a factory recalls Fritz Lang’s Metropolis as filtered through a Slayer album cover. But there are also visuals I quite simply have not seen before, and I’m not sure I possess the full equipment to process. How does one prepare oneself, for example, for the enormous bovine creature with gigantic, pendulous breasts hanging below a gaping anus, which itself is continuously spraying shit? Or the wriggling baby-things, seemingly pitched halfway between the malformed infant of Eraserhead and the titular organism from The Tingler, which are extracted from their host via autopsy and whisked down a hall for an even stranger procedure? Few films– let alone animated films– have the temerity to be so uncompromisingly dense and scatological and weird, and I was absolutely 100% on board.

As he explained when I interviewed him last week, Tippett began work on Mad God in the late ‘80s, only to shelve it when CGI began to supplant stop-motion as the industry standard. While the majority of the film was completed in recent years (primarily via period-appropriate stop-motion, with some live-action and other animation styles mixed in), it certainly feels like it came from an earlier era of filmmaking. It’s easy to forget in today’s climate of sanitized superhero adaptations just how weird and dark comic book-style fantasy could be in the alt-friendly ‘80s and ‘90s (compare last year’s limp New Mutants movie against the truly breathtaking art of Bill Sienkowitz’s late ‘80s run on the comic). Mad God feels of a piece with Jim Henson’s The Dark Crystal or MTV’s Æon Flux animated series; all are almost defiantly weird, presenting personal visions with trust that an audience exists which will be receptive to their unusual charms. Mad God is in many ways literally beamed in from another time, and, perhaps as a result, is one of the most uncompromising films you’ll see all year.

Of course, it should go without saying that Mad God will not be for all tastes; its unremittingly grim world is surely not a place all viewers will want to travel, and its breakneck pace can prove exhausting (on the flipside, it does sag a little bit in the middle with an extended live-action interlude featuring Repo Man director Alex Cox as a mad scientist, which, while fun, saps a little bit of the film’s momentum). But this is still a towering achievement from one of film’s bonafide geniuses. In Mad God, Tippett finds himself working with an unfettered freedom few filmmakers– let alone animators– get to experience in their careers. One may puzzle over the film’s title; while open to interpretation, there is no clear Mad God within the film’s narrative. To me, the message clear: the Mad God is Tippett himself, and this is his unholy creation.