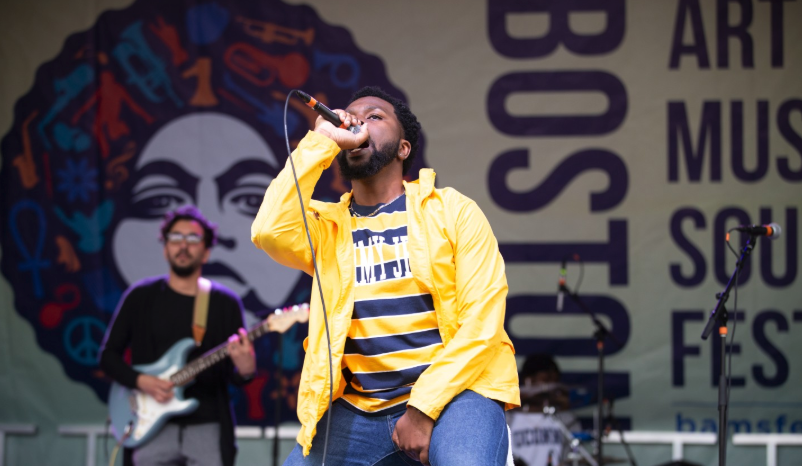 Taken by Jen Vesp for WGBH.

Dorchester-born hip-hop artist Latrell James speaks passionately about his hometown when I sat with him before his performance at BAMS Fest at Franklin Park, whether it’s about being a diehard Boston Celtics fan or the future of the music scene.

His name or voice may be familiar to you if you’ve heard the infectious melody of the Cheerios commercial, “Good Goes Around.” Or maybe you’ve heard of him before that because you know an ounce of what’s been happening in the Boston hip-hop scene as he’s worked alongside Boston rappers such as Coustin Stizz, Michael Christmas, Khary, and Max Wonders (to name a few).

While Cheerios is a worldwide brand, it doesn’t overshadow his accomplishments of building an organic network in Boston and working with local (above-named) artists, local venues, and local companies and brands. One of these companies, Gratitude Sound, was the one that nailed him the Cheerios gig. But peak Boston pride and excitement for Latrell was getting the chance to produce music for an even bigger Boston brand: the Boston Celtics.

“When you can say a hometown artist has contributed to a home team, that’s such a big thing to me.”

He spoke with such jubilance when talking about making music for a 2018 Playoffs commercial and it comes down to what Boston means to Latrell and what Boston means to everyone who lives here. “Boston is a sports town. College, sports town, and then music falls somewhere right under.” He was worried that after he landed this placement on the commercial that the Celtics weren’t going to be able to make it out of the first round without Kyrie Irving. But thankfully, the commercial got to play for a few rounds of the playoffs. Latrell even went on to tell me about his excitement for next year, even down to the prospect Robert Williams that they drafted in the draft in June. “Dude, I love the Celtics so much.”

He’s a multi-faceted talent: producer, rapper, engineer, singer.  His experience and knowledge of the music industry is one of his strongest traits however. It’s how he’s been able to leverage his local impact and single release (Twelve in 2015) into gigs like Cheerios, Boston Celtics, and Fenway Park performances. He has turned down record label offers because he knows he can achieve “success” without the help of a major label.

“They’re doing the same thing we’re doing,” said Latrell. “But they have the machine behind them to do it. As an independent artist, you have to be ahead of the technology.”

Latrell James isn’t quite there to say he’s ahead of the game or ahead of where he’d be if he signed with a label, but he has his agency and he plans on keeping it. “The real goal is to stay as close to independent as you can. I just want to live off the art. That’s success.”

For now, he’s planning his next move tactfully and carefully.

His last and only album was released in 2015 and since then all we’ve gotten are a sprinkle of collaborations and live performances from Latrell James. But since Twelve‘s release, Latrell has been writing and working on his second album called The Sky Might Fall and after being completed for over a year, he’s almost ready to release it. He said he let it sit without listening to it for eight months and the album still felt new. He has already released two singles from The Sky Might Fall recently called “Okay” and “Today,” to prep for a fall album release. He gave the crowd at BAMS Fest a taste of a few new songs, including “Today,” produced by frequent collaborator Tedd Boyd, which was only two days old the day of the event.

When reflecting back on writing The Sky Might Fall, Latrell James feels relieved to be able to show everyone what he’s been working on since 2015, yet disappointed that some of the personal and external conflicts in his life haven’t changed since he wrote some of the record. Including “Today,” a track he wrote two years ago about the dark world surrounding him. “It was something that happened in the past: on my ‘today.’ I wrote that record in hopes that it wouldn’t happen in the current today. The fact that the lyrics are still relevant—even more relevant—today had me hurt. I was hoping that something would change.”

While Latrell James speaks highly of Boston and the music scenes in it, he also wishes that more people were willing to invest in the hip-hop music scene. Although artists he worked closely with like Cousin Stizz and Michael Christmas have blossomed out of the Boston scene and received label deals in the process, it’s never a sure thing and he believes there aren’t that many platforms for young artists in his scene. He’s seen people leave Boston due to lack of resources, and while he won’t do the same, he wants to be able to “bring that light back here” that radiates in music hubs such as Los Angeles and New York. He wants to build his network nationwide and bring the proper resources needed back to Boston to showcase that Boston does have potential to stand next to those regions.

This is all being said while we’re at one of the most unique festivals to sprout up in Boston in recent memory. Boston Art & Music Soul (BAMS) Fest is a new annual non-profit run festival that “strives to break down racial and social barriers to arts, music, and culture for marginalized communities of color across Greater Boston.” This was BAMS Fest’s first year and it had around 20 music acts spanning hip-hop, R&B, jazz, and soul, art displays, spoken word, food trucks, vendors and more. And it was free and open to the public in the middle of Franklin Park in Dorchester. It’s not a common occurrence for there to be an event as special as BAMS Fest around Boston. It seems odd, like Latrell says, that events like this don’t happen frequently at a place like Franklin Park or somewhere like Lawn on D or any open area in Boston such as the Harvard Fiellds, home to Boston Calling. It’s not an easy task and not many people are as ambitious and dedicated to make this happen like BAMS Fest, who has been working on this first event for years to make it possible the way that it’s going down

When I asked Latrell if he knew of any events like BAMS Fest for people who may have enjoyed it, he didn’t have an answer. I also spoke to Oompa about this, who is another hip-hop artist performing at BAMS, and she seconded this sentiment.

Oompa also spoke to me on the hip-hop community and the need for larger platforms like BAMS Fest. When I asked her the importance of an event like this, she told me, “There’s so many talented musicians in the city that get overlooked by larger institutions like Boston Calling. They don’t do a good job of being like ‘Hey Boston artists, what can we do for you?’ It’s important for our community that we have a festival that belongs to the community.”

“We all have to band together.”

Latrell James wants to be able to bring these platforms to Boston and he’s on the same page as Oompa when it comes to the community having to work together and maybe having to put up their own capital if larger institutions aren’t willing to. “[We need] more people to invest in the art. With our own festivals here, we can do our own Lollapaloozas. Maybe I can get a Latrell James festival here.”

Be on the look out for The Sky Might Fall coming this fall.