News flash: craft beers are often brewed with more than one variety of hops. You probably didn’t need me to tell you that, but sometimes it’s good to refocus and state the obvious. Brewmasters are a lot like chefs, and they’ll often mix and match hop varieties to achieve a particular flavor profile.

However, as is so often the case in craft brewing, the pendulum has begun to swing back the other way. Night Shift Brewing, whose taproom is located in Everett, MA, has been playing off the concept of single hop and rotating hop beers for a while now, but they have redoubled their efforts in 2017 by commercially releasing a series of single hop beers under the name “One Hop This Time”. The concept of a single-hop beer is nothing new, but I almost look at it as brewers doing consumers a favor by allowing them the chance to experience individual hops and learn what characteristics they impart to the beer. I was able to acquire three varieties of the OHTT series, made with Amarillo, Simcoe, and Motueka hops, which I realized that I must consume – purely for scientific reasons, of course. All of the beers were fairly fresh, having been canned within a few weeks of being sampled. Each beer poured similar shades of hazy yellow-orange (although with the Amarillo a bit more on the orange side of the color spectrum than the other two) and left a lingering, soapy head on my pint glass. 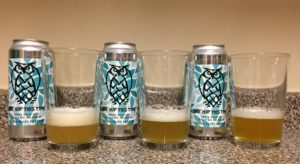 First up for tasting was the Amarillo variety. Amarillo hops are one of the most commonly-used flavors among craft IPAs – they can can be found in Dogfish Head’s 60 Minute IPA, Rogue’s Brutal Bitter, and Smuttynose’s Finestkind IPA, among others. This variety is typically chosen for the heavy bitterness and pine-y, orange-y flavor that the hops impart to the beer, and this was no exception. The aroma was the most pungent of the three beers I tried, and the citrus zest faded into a mild hop bitterness that lingers on the palate. Amarillo has a tendency to assert itself, which is likely why this beer tasted the most ‘familiar’ of the three. If you’re a fan of Sierra Nevada’s flagship pale ale, this beer would be right up your alley.

Next was the Simcoe. Simcoe is a relatively new strain of hop; in fact, they actually aren’t of legal age to taste themselves in action, as the variety was commercially released in just 2000. You might recognize the taste if you’ve tried some of Green Flash’s beers, or maybe it just sounds familiar because it’s also a great name for a dog. Regardless, the Simcoe was absolutely delicious, albeit a bit dryer and more subtle than the Amarillo. The pine-y bitterness was still present but much less robust, and the hints of grapefruit, mango, and pineapple that the Simcoe imparted to the mix complimented the base beer quite nicely. Overall, it was very smooth, very balanced, and probably my favorite of the series – a New England take on a West Coast IPA. Although each beer in the series clocks in at 6% ABV, the Simcoe hops imparted a light, tropical flavor that make this dangerously drinkable.

Finally came the Motueka, which I found to be an interesting and inspired choice for this series. Amarillo and Simcoe are both relatively common in craft IPAs, but Motueka (a particular strain of the Saaz hop) has a longstanding lineage dating back to the original Czech Pilsners brewed in the 1600s. However, while Amarillo and Simcoe find their way into a wide variety of craft PAs and IPAs, varieties of Saaz hops are almost exclusively used in milder beers. The difference was immediately noticeable, as the beer poured lighter in color and was a bit less flavorful initially, but the spicy, peppery aftertaste imparted by the hops made for an intriguing contrast to the other two beers. There was very little aroma – a hint of lemon-lime candy to go with a touch of wheat, like maybe like a Triscuit cracker – and the flavor faded quickly into a slightly bitter aftertaste, but noticeably absent was the heavy citrus of the previous two iterations. Had this been a blind taste test, I would’ve had difficulty identifying what kind of beer this was; the turbid, gold-yellow appearance (almost more like a cider than a beer) and complex, spicy flavor hit an odd but delicious middle ground between a Saison and a New England-style IPA.

As delicious as each of these beers were, the real fun came when I decided to combine the varieties. (Aside: why are beer drinkers afraid to blend beers? I understand the idea that a beer is created during the process of brewing, and I don’t intend to suggest that what I’ve done here will duplicate the flavor of hopping the wort with these combinations. But like, Black & Tans are delicious! If we applaud brewers for going against the grain, why shouldn’t we, as drinkers, do the same from time to time?) An equal mixture of the three beers together offered a variety of citrus touchpoints alongside hints of candied fruit, all supported by a mild hop bitterness that was balanced by a touch of spice in the background. Although the Motueka was initially overpowered by both the Simcoe and the Amarillo, it was still able to assert itself with an aftertaste that cut through the bitter.

Overall, if you’re a fan of hoppy beers, I highly recommend seeking out this series (and Night Shift’s beers in general, as they’re all pretty top notch). Building up your palate is one of the most enjoyable aspects of drinking beer, and one of the best ways to do that is simply by trying as many varieties of beer as possible!

Night Shift’s taproom is located at 87 Santilli Hwy, Everett, MA, and they just celebrated their 5 year anniversary. They intend to continue the OHTT series at least for the near future, so swing by the taproom or your friendly local craft beer purveyor to pick up some pints!