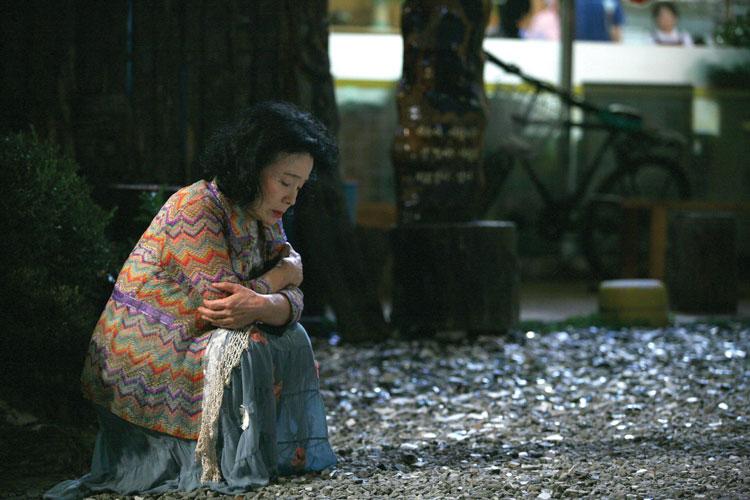 Slowly unraveling a character’s exterior to reveal a core loneliness is a painful procedure to watch, but if it needs to be done, it should be done with poignancy. It’s no mistake that Lee Chang-dong’s Poetry is so christened (as its ambiance resembles the same consciousness as a purposeful verse), though it bears the daunting task of relating to such a broad term. Maybe Lee’s own recognition of the title’s enormity presents in an ink-black humor; the opening scene is of a few boys spotting an object languorously floating down a river. When it comes into clear view, we see a girl face down. As the body settles into frame, “poetry” in Hangul appears next to the back of her head.

Even at a length of two hours, the story’s flow is so organic that it feels uncanny when the movie ends, as if time ceased as well. And if life were a river, Mija (Yoon Jeong-hee) is a rock in the middle of the stream, where erosion is surely taking place. Reaching an early stage of Alzheimer’s, it seems like Mija is nearing the end of a life — what that life had been, we can only conjecture.  What we do know is that she’s taking a community class in poetry and she’s taking care of her high school grandson because her daughter left him in her care to work in another city. Unfortunately, as she treats the world in the way that she believes to be right, the world reciprocates by spitting at her. Her grandson is implicated in a classmate’s suicide– which is then complicated by the fathers of the other implicated boys– and her teacher doesn’t seem to understand that writing a poem is too goddamn hard.

It’s impossible not to feel sympathy for Mija, and at times we feel the gut-wrenching consequences more than she does. But we take the little things, like a perfect badminton match on the streets or a sincere exchange of words, as the last gasps of air in a doomed story, only so that we can push forward the smallest vessel of hope that things will be better at the end. Poetry artfully self-feeds with “what if?” moments in the same swing as distancing the viewer further into despair as the situation unfold, making for a resolution as bleak as a blank page at the end of a story. But if there’s anything to take away from it, the destination is only par for the course. And this journey’s worth it.

Now streaming on Kanopy (free with your library card)