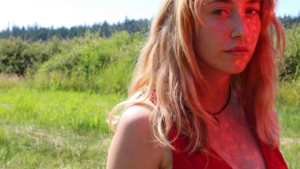 I’m a sucker for horror films that take place in the daylight. Whether it be Midsommar, The Wicker Man (yes, even the “oh, the bees!” Nic Cage remake), Funny Games, or The Green Inferno, daylight horror is uniquely unsettling, and brutal, in a way other horror films aren’t. In the daylight, gore and violence are illuminated, and the ugliness of what’s happening isn’t shrouded in darkness. As kids, we’re taught that there is an inherent divide between light and dark, and the latter is “bad.” So it makes sense that, as we grow into adults, we are jarred significantly by the reversal. At least, I think, that’s why I find daylight horror so fascinating.

This year, when I was choosing what to screen at the Boston Underground Film Festival, my eerie fascination with sun-drenched terror attracted me to Avalon Fast’s directorial debut, Honeycomb.

Shot on location in British Columbia, Honeycomb follows a group of young women living on Cortes Island during the early summer. It’s their last before going off to college, and the headstrong friends find that life has become mundane. They want something more, but are not sure what. Willow (Sophie Bawks-Smith) animatedly reveals that she has found a seemingly abandoned cabin in the woods. She further suggests that they should escape society and live there together as a commune. The others, thrilled that something exciting and different has fallen into their laps, quickly agree. The insouciant crew—consisting of Willow, Leader, Millie, Vicky, and Jules—pack their things, leave half-hearted notes for their loved ones, and amble through the woods toward their new lives.

The summer goes by in a psychedelic haze, oozing with hangovers, drunken parties with the local boys, sex, and marijuana. As autumn approaches, the girls grow careless and vicious toward one another, having created commune “rules” that carry violent and often excessive punishments. Envy begins to plague them, and their idyllic life in the woods grows nightmarish, especially for Millie, who—unbeknownst to her—may have broken an unspoken rule.

Honeycomb is a surreal treat—like something out of a faraway dream that you only half-remember when you wake up. Fast’s appreciation for folk horror shines here, in its daylight, in its symbolism, in its celebration and focus on femininity and the gender divide. The heavy symbolism of bees, and, by extension, queen bees, is beautifully appropriate for a group like Millie’s. The opening shot of the queen bee portrait, found in the abandoned cabin, has been lingering in my mind since the screening. Despite being evidently low budget, this flick has some seriously stunning frames. The overcast, gritty aesthetic in-between shots of the hot, setting sun seething through the dark woods, or the girls dancing in the dark in sundresses, shrouded in pot smoke and burning string lights, added such beauty to the sinister narrative that was unraveling. Fast captures summer in these shots, its ethereal haze, its mundane sunlight, its quiet disposition. The girls’ relationships with one another—and their downfalls—felt jarringly real, and throughout the screening, I found myself reminded of some of the friends I used to hang out with on hazy summer days at the lake (minus the violence, of course).

Honeycomb is an impressive debut for Fast. It’s a melancholic, wistful analysis of youth, that insatiable strive for wanting something more. I’m excited to see what Fast makes in the future, and I hope she continues to only grow from here.